The short story: Our neighbor didn’t care about his cat. We fostered her in our backyard, and we have her inside now because he moved away and left her homeless. That happened on Saturday.

The long story: To be clear, we never took her and put her in our backyard. She came with the house… I mean, the day we moved in, she greeted us on the doorstep. She was the one-cat welcoming party. We thought she was a stray.

We found an old paper plate holding the remnants of cat food next to the house. We assumed it was for her. Maybe someone who used to rent our house abandoned her…?

She looked to be healthy and well-fed for a stray, but it seemed that she occupied the entire block. We thought maybe she ate off of old paper plates at different houses on the street. She didn’t continue to eat off of paper plates at our house, though. We resisted putting food out for her. If she did have a home somewhere, we didn’t want to encourage her to hang out on our property more than she already did.

The few neighbors we got to know said that they often saw her around in their yards, but no one knew if she belonged to anyone. Everyone thought she was a stray. She was “The Neighborhood Cat.”

She was cute and obviously intelligent. I went out of my way – way out of my way – to ignore her the whole first year we lived here, because I know me. I didn’t want to get attached to someone else’s cat. She was always here… in the front yard, at the front door, on the patio, on the side of the house, in the backyard, at the back door. It was hard to ignore her friendly meows and her soft, furry little body winding around my ankles, but I managed to look the other way. For a long time, I never even looked down at her, because I didn’t want to see her eyes.

We started referring to her as Ronnie James’ girlfriend, as she and the Wrah-Wrah fondly gazed at each other nose-to-nose through our living room window. (Our cats never go outside.)

Ronnie James died in the spring. The little black cat kept hanging around. Renters living in surrounding houses came and went. No one knew her, but everyone knew her.

In the late spring, she appeared to be pregnant. Then she vanished for a month, only to reappear looking not pregnant. She had to have been in some house somewhere, we thought.

At the end of the summer, visiting relatives stayed with us for a couple of weeks. When we gathered on the front patio to enjoy the night monsoons, the little cat would be there, too, purring under the hands of our cousins. She was cute, intelligent, and affectionate.

One afternoon I rounded the corner onto our street as I was walking home from work, and she came sprinting toward me with utter glee from the other end. I was taken aback and amazed that she saw me from so far away, especially since I was still in my ignoring-her phase. That was the day I broke down and petted her. How could I not?

Predictably, I started to fall in love with her as I relaxed my guard. The week of Halloween, I kept a vigilant eye out – black cats on the street tend to be more at-risk during Halloween.

Finally, about seven months ago, Callaghan managed to approach the mysterious occupant of the house next door. (Not the various bros in the house on our other side. We knew them, and they knew nothing about the little cat.)

We never knew the guy’s name. We knew that his house had a revolving door through which different people would pass at random times 24/7, but he himself was hard to pin down. “She comes and goes. Sometimes she’s gone for days. There was this one time my friend saw her at the Circle K,” he said, referencing the convenience store/gas station down the street.

We couldn’t believe that anyone could be so nonchalant about his cat roaming around outside, eating off of old paper plates at different houses and ending up at gas stations.

It’s one thing to let your cat outside. It’s another thing to leave her outside to the point where everyone thinks she’s a stray.

The neighbor went on to confirm that his cat had been pregnant, and he had her spayed after the kittens were born. With this, we had to believe that she belonged to him. (We don’t know what happened to her kittens. We never saw them.)

This last December, the cat appeared in our backyard laundry room on an exceptionally chilly day. What could we do? She seemed hungry and cold. It was too much. Compassion insisted that we drop our demeanor of indifference, neighbor or no neighbor. We lined a cardboard box with blankets, put it against the wall by the dryer, and set out dishes of dry cat food and water. From that day on, she made our property her official home base. She’d go out and make her morning and evening rounds around the neighborhood, and then she’d come back to our house. Always.

At some point, the neighbor acquired two more cats… male cats. He left them outside, too, of course, and they bullied the little black cat, who by then we’d named “Cita.” (If she had a name before, we never knew what it was. The guy never told us, and we never heard him calling for her.)

We habitually chased the other cats off our property when we’d catch them menacing Cita. Ferocious cat fights would wake us up in the middle of the night. One morning, we found her on our back patio with a big, oozing wound on her flank. We were furious. Why didn’t he care?

Recently, I saw her limping after jumping down the fence to get into our yard, so we cut out a little cat door for her at the bottom of the gate. The gratitude she displayed when we showed it to her was heartbreaking.

Cita played with the cat toys we put on the back patio. She used the litter box we put out there, too. Yes, an outdoor cat used a litter box! We spent more and more time with her, just hanging out and bonding. She’d already gotten to know Nounours and Nenette through the windows. I started to tentatively include her in my Kitty Update posts.

Despite everything, we assumed that the neighbor would want her in the end. He didn’t. On Saturday morning, the day after I included her in my last Kitty Update post, he drove off with all of his stuff in a giant U-Haul truck and left her behind. He never came around asking about her. He literally abandoned her.

On the one hand, we were sad for her. On the other hand, we were glad that he didn’t take her away to be neglected somewhere else.

Suddenly, she was officially our responsibility.

We bought her a collar and a tag.

Pink and leopard print jewelry for Cita, my cell phone number on the back of the tag being the most important part, of course.

We took her to the vet that same day before we brought her into the house.

We agree. Cita is a gorgeous cat, and now she’s a vaccinated and microchipped cat, too.

Then we brought her home. She’ll never go outside again, because she’s our cat now, and we don’t have outdoor cats.

We thought Cita would rebel and demand to go out, but she didn’t. She politely asked to go out just twice, but she wasn’t upset when we didn’t open the door. It was almost like she was testing us to verify that she wasn’t dreaming.

Cita’s transition from outdoor cat to indoor cat went seamlessly. As for her relationship with Nounours and Nenette… that’s a different story. The first two days went pretty well, but today, Day Three, they took a step (or three) back, which is why this post is late. I’ve spent the morning babysitting, herding, and supervising cats. It will take time. We’ll get through it. We will persevere!

Here is Cita before (outdoors): 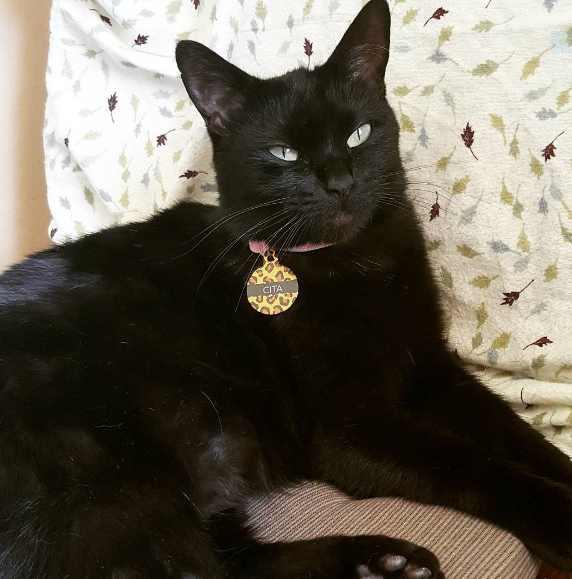 Cita’s “before” pic was taken just one week ago! She’s stayed glossy and black since bathing herself for the first time indoors. She’s no longer a dusty desert kitty.

Now Cita can bathe without having to lick off layers of desert dust.

Here she is after just one night inside:

It’s wonderful to see her so happy!

Nenette and Cita resting together in the dusk.

(Don’t let that peaceful picture fool you. It was World War III in here this morning.)

Hopefully, Cita will never have to employ her survival skills again.

Cats are domestic animals. Just because they can survive outside doesn’t mean they should be outside. There are dangers outside! At heart, all cats prefer to be indoor cats. Cita hasn’t looked back.