Welcome back to my office! My plant family has grown since my last update. I love that the only color in my writing space is alive.

Plants give me life from the inside out, fueling me from the inside and providing a lovely source of creative energy from the outside. My desk still sits at an angle toward the center of the room, facing the window, and I’ve now surrounded myself with plants.

I’ve moved most of these guys around since my December office update. Some of the plants have been re-potted. One of them has departed this world, sadly, and two of them are new. Let’s look around!

Behind me and slightly to my right (on the wall to the left of the door): Icarus.

Icarus (re-potted since my December update)

Behind me on the left side: Hercules and Angel (on the corner stand re-purposed from the patio). These two are my newest. I discovered Hercules on a dusty shelf at Walmart, all by himself, alone and bedraggled. He’s doing so well now!

Angel sits beneath, on the second shelf. I picked him up from the florist’s section at Fry’s. He’s also doing well, though he’s quite fragile. He’s an aluminum plant.

(The color of the walls in here – in the whole house – is so strange and sensitive to light and camera angle. The wall can look like two different colors even in the same pic!)

(from top) Hercules and Angel

Here’s a close-up of Hercules… I’m so pleased with how he’s thrived in the short time he’s been here! I’m going to re-pot both Hercules and Angel in the next few weeks. They’re strong enough for it now.

Moving along, slightly behind me and to my left (and to the left of the printer): Jerome. 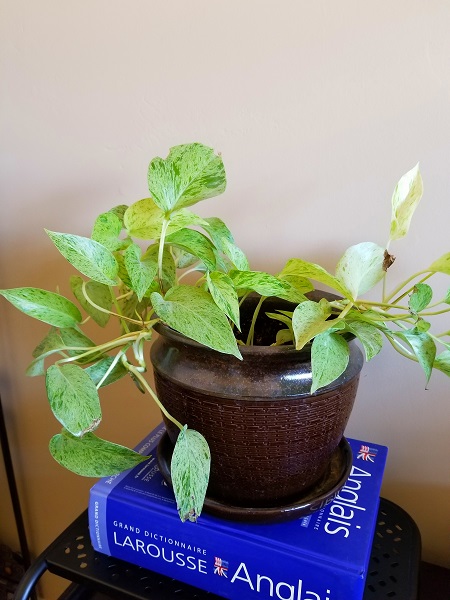 To the left of my desk, to the right of my printer: Holder. I’m glad to say that he’s doing well. Linden, his partner, did not make it, I’m afraid. RIP Linden.

Holder (re-potted since my December update)

Just in front of my desk and to the left: Robbie. We migrated him to my office from the living room. Within 24 hours of moving him in here, he spread out, opened up, and turned a lighter, brighter shade of green. Plants love the strong daylight in this room! There’s no direct sunlight in here, so all of these guys are low-light/indirect sunlight plants.

I pulled this small table out of the closet so Robbie could sit in the middle of the room, rather than against a wall. It’s perfect for him.

A better look at Robbie (as I see him from my desk): 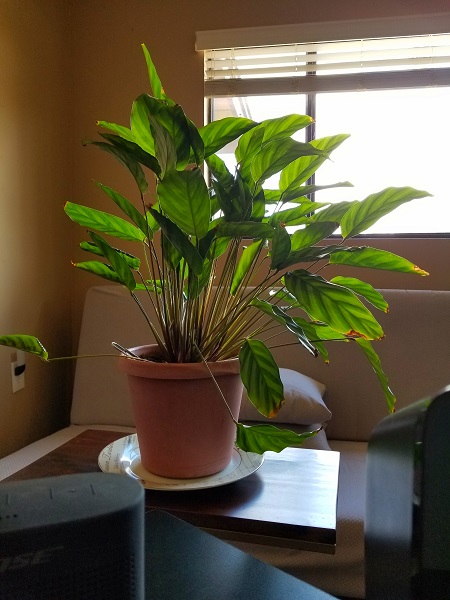 My view sometimes includes Nenette sleeping on the futon behind Robbie. 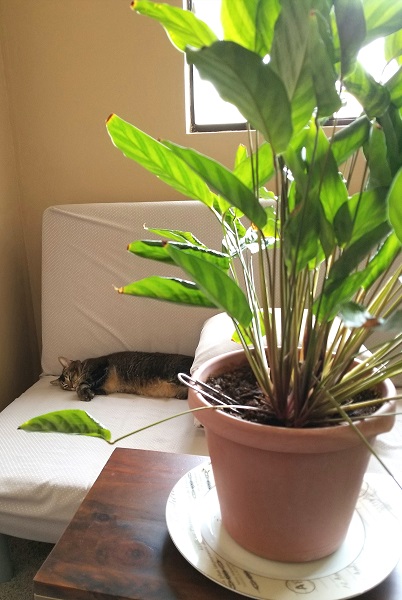 Nenette napping on the futon.

Finally, Barclay, my first, sits further out in front of my desk and to the right, same place he’s been… I did have to purchase this stand for him, though, as he needed a greater height. His tendrils had grown to where they were coiling on the floor. I found this cheap little metal stand at Ross.

Here we are, full circle… and a full circle, it is. I don’t think I’m imagining the cooler note I feel in the air here, or the scent, loamy and damp and fresh. I haven’t burned candles in here since I started cultivating this little oasis in my desert office.