First of all, you guys, the response to my last post about my gum grafting surgery was just totally unexpected and rad. Thank you all so much for your good wishes!

I’m happy to report that so far, my plan to make October a month of awesome and November a month of ghastly pain and discomfort is going very well. This makes me happy. I like when things go according to plan.

As expected, my face has been swollen, misshapen, and multi-hued, starting on the blue end of the spectrum on both sides. The left side of my face was more severely mangled. I’ve had a fat upper lip that’s prevented me from closing my mouth, which has caused my lip to crack and peel with dryness in spite of constant lip balm application. I haven’t gone out in public since the surgery, because I’d rather not have people stare and wonder WTF.

It’s getting better every day, so everything’s healing well! I noticed that the swelling had gone down a little when I woke up yesterday morning, and the hue of the bruising on my face had turned to a beautifully saturated yellow. I do indeed look like I’d been in a fight. If anyone were to see me and comment to that effect, I would say, “You should see the other guy. He’s a cadaver.” Which would be true.

Here’s a pic I took this morning: 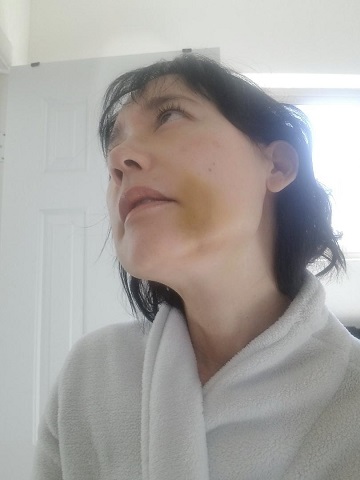 (It’s hard to see here, but the area beneath my jawbone is streaked purple. The other side of my face is also bruised.)

I wanted to tell you about the most interesting aspect of this surgery, though. I came up with this genius idea to do something that’d never occurred to me before: upon insertion of the I.V. anesthesia needle, I would remain as aware as possible so that I could analyze the feeling of going under, discover whether it would be possible to resist it, and determine at what point I wouldn’t be able to do that.

This scheme turned the anesthesia process into a bizarre and utterly surreal event.

Strenuously resisting the anesthesia and paying great attention to it made my descent into unconsciousness a jagged and mildly unnerving experience. It created a sensation of plummeting down from floor to floor within a tall building, bouncing off the staircase landings in between, my fall disrupted at intervals.

Feeling cemented to my back while dropping down distinct levels brought the vaguest sense of panic into my field of perception. It was panic so far removed, it was a mere echo, like a ghost in the ether – it was there, but it couldn’t approach. I simply concentrated on the feeling of falling through the center of my own being, pulled downward bit by bit through a widening black sinkhole that opened from my solar plexus while the surgeon’s murmurings faded into pointlessness, like post-apocalyptic static filtering through a surviving short-wave radio.

And then I woke up.

As cool as it was, I don’t think I’ll repeat this experiment when my next surgery comes around in April.

Back in the present, I’m working through pain and the unpleasant sensation of my gums suffocating beneath the cadaver tissue plastered over them. There’s this feeling that I’ve got a thick band of foreign matter wrapped around my gums, and it’s maddening. I want to reach in and rip it out. I know that my body is busy growing nerves and whatnot to connect everything together, but I wish it would hurry up!

My tongue has become accustomed to the feel of the suture knot behind my front teeth. The other thing I’m trying to disregard is the fact that I can’t brush my upper teeth at all. I’m using the medicinal cleansing solution given to me, but it doesn’t make my teeth feel clean. The nurse on the phone this morning reiterated that I can’t brush until after my stitches come out, because until then, the stitches are all that’s holding my gums together.

The stitches come out next week.

Watching Zach Choi ASMR (YouTube) has been a keen exercise in self-torture, but I can’t help myself.

Foods I dream of shoveling into my mouth with shameless abandon:

Also, APPLE CIDER VINEGAR… and I can’t wait to chew gum again! (Pun not intended.) I miss MINT. I want double the mint, double the everything.

Aside from chewing gum, I don’t want sweets at all, because most of what I’ve been consuming has been sweet/not-savory, and I’m definitely a salty/savory person. I’m planning the sides I’m going to make for Thanksgiving, and I’m hoping that my craving for salt doesn’t lead to me to over-season the dishes. Thanksgiving dinner will be the first “real food” meal I’ll have, and I have to remember that I won’t be the only one eating the food that I make.