You may have noticed that my non-review movie reviews are almost all positive. That would be because I prefer to “review” movies I like. Generally, if I don’t care for a film, I won’t write about it. I’ve seen fewer than 10 movies this year, and only two of them were disappointments. (I’m looking at you, Captain America: Civil War and Suicide Squad.)

This brings me to the part where I declare, for what little it’s worth, that Hell or High Water is easily the best film I’ve seen this year. It is brilliant.

The story, which takes place in Texas, though the movie was filmed entirely in New Mexico, is about relationships. Two parallel, family relationships.

Hell or High Water is a testosterone-driven story, so don’t go in looking for strong female characters. The few women in the mix are peripheral. We never get to meet the most important woman in the film, because she’s dead. Central to the plot, but dead.

Thankfully, no one saw the need to throw in a love interest, because that would water down the beautiful disaster that is the protagonists’ predicament.

With the action fueled by family hardship, the events amount to a test of emotional stamina in the context of moral limits. Pacing is critical. We’re fortunate in the hands of director David Mackenzie (Starred Up); we trust that he can calibrate the hell out of a story, and he doesn’t fall short. Hell or High Water demonstrates how restraint can heighten the tension in a film and effectively build its suspense. Here, we see it masterfully done. I was hardly aware that I was holding my breath.

Not to mention, it was fantastic to sit down in a theater and find myself before a fine piece of writing. Taylor Sheridan (Sicario) wrote an intelligent film of considerable depth. I loved the unconventionality of the plot arc barely descending after the climax. The film leaves you hanging on the other side, but near the top, right where you want to be and don’t want to be.

As a result, we walked out on a variety of cliff-hanger that demands no sequel.

I highly recommend this film, if you don’t mind a little gunfire. It’s really, as I said, about relationships.

Don’t Breathe is a thriller/drama, otherwise known as a thrillama. (Adorable, right? If that term didn’t already exist, it does now.) It’s categorized as a horror film because there’s no other way to describe the shit that goes down. 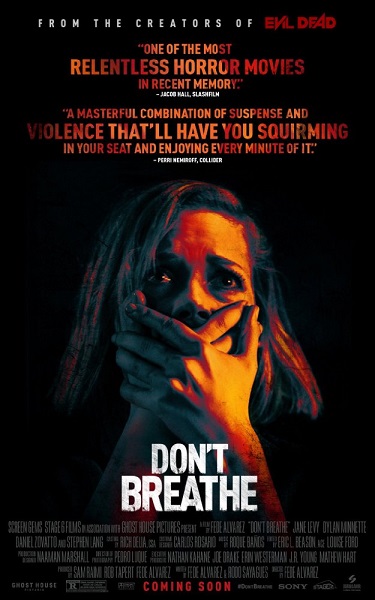 Don’t Breathe is an anomaly of a horror film. There’s no hint of the supernatural. No monsters or creatures of lore. No deranged killer wearing a mask while hunting people. No scheming lunatic masquerading as an ordinary person in unsuspecting victims’ lives. No lethal super-virus trampling international borders. No evil aliens or UFOs. No colossal, razor-toothed fish torpedoing out of the ocean. No natural disaster threatening humankind with the apocalypse in a planetary meltdown. No serial killers. No creepy dolls. No clowns stalking children in the Carolinas. (Oh, wait… that’s not a movie. That’s really happening). (It’s not a movie yet, that is.)

And he’s both a victim and a victimizer.

He has reason to do the things he’s doing, as he is being provoked. In his own home.

He does have an obsession, shall we say… but by the time it rears its head, the reveal is powerless to overtake the action and suspense already blurred in full throttle. We’re brought back to the central terror, albeit minus any sympathy we may have had for the guy.

Likewise, a reveal in the backstory of another character serves in the reverse: it seeks to help us feel sympathy for her, lest we’re feeling 100% like “she’s getting what she deserves”… though some of that sentiment may remain. It did for me. There can be no justification for her actions, but at least we’re given some kind of device with which to understand her emotional motives.

Don’t Breathe is smart, unlike a great percentage of its ilk. I enjoy a stupid, campy horror flick as much as the next devoted fan of the genre, but Don’t Breathe is a pleasurable breath of fresh air, as they say. Director Fede Alvarez (Evil Dead) crafted it into an exhilarating and tight ride.

I think I’ve said all I want to say that I can say without spoiling it for you, if you haven’t seen it. This aptly-titled film is worth the price of its ticket. (An alternate title could be Why Everyone Should Know How to Hot-wire a Car.) I recommend this film highly if you enjoy horror and/or thrillamas, if you don’t mind a bit of gore… and a lot of breath-holding.

We went to see Lights Out two Fridays ago, which happened to be the night of our first major monsoon storm of the season.

Lights Out is an old-school horror film that benefits from its uncomplicated plot, one part jump scares and one part jittery suspense. (In another dimension, one part atmosphere, one part sound design, both exquisitely crafted.) (In yet another dimension that’s irrelevant, no part award-winning acting.)

We didn’t care about the acting, and we didn’t care much about plot, although the plot in this film isn’t badly lacking. We just cared about being spooked by the monster as we sat ensconced in the dark theater.

See, in this movie, you don’t know when the lights will go out, and the first thing you learn is that when the lights go out, scary things happen. Lights Out preys on – or resurrects – our fear of the dark. It’s a simple premise, and that’s why it works.

Rather than wasting time and effort trying to impress us with plot complexity, character development, and CGI effects, the film teaches us how to react. It lends a coat of paranoia to each interior scene, each room, confining tension within the walls. The attention paid to the integrity of each scene maintains the mood, and I appreciated this consistency. There we were in a house that seemed real, with lighting that seemed real (not forced, as props as central motif can seem), holding our breath the whole time. Lights Out is back-to-basics, monster-under-the-bed horror, enjoyable and making no apologies for its lack of embellishments.

I found the monster in Lights Out to be satisfying, too. It’s scary because it’s elemental. It’s unencumbered by CGI overload, devoid of the cheesiness that often ruins the spook potential of contemporary horror movie evil entities.

To make my conclusion as simple as the movie itself: Lights Out is an entertaining horror movie.

You go into a sci-fi horror film prepared for some gore, and eventually, you get… just a little, if it’s 10 Cloverfield Lane. You might even be taken aback when it happens. You probably also go in anticipating campy sci-fi horror film fare, and you might get a tiny morsel of that, too. The smidgen of camp may even come with a light dressing of irony, which would make 10 Cloverfield Lane a clever specimen of its genre.

10 Cloverfield Lane doesn’t insult the intelligence of its viewers. Its writers reveal what’s necessary to piece together the backstory from which horror arises. As important as that backstory may be, no one spells it out for us, and this restraint helps to make up for its lack of depth.

10 Cloverfield Lane is billed with the tagline “Monsters come in many forms.” This is apt, so you could say that it’s a monster movie as well as a horror movie, a thriller, a sci-fi movie, a sci-fi horror movie, and a drama… yet 10 Cloverfield Lane is in no danger of an identity crisis. It works just fine switching its hats. Horror seeps in as the mystery unfolds, and the Great Unknown serves as a character in and of itself.

I just wanted to share these few thoughts with you, should viewer opinions interest you. Sci-fi horror (or sci-fi anything) is readily passed over by those not endeared to such films and their ilk. I guess what I’m trying to say is that if you’re not a sci-fi fan, you may yet find something to enjoy in 10 Cloverfield Lane, as its appeal goes beyond the constraints of its genre.