Oh, wow… December 1st! Time to rave about some of November’s memorable Little Things. How about this for a change: I’m starting with food this time, because there’s a lot of it. The month that just passed had a culinary focus. I actually didn’t experiment with any new cosmetic-type products in November, so this list is devoid of that kind of stuff. We didn’t see any movies, either (I guess we’ll catch The Martian at the cheap seats or online when it hits the site we use), and we only started one T.V. series… but man, we’re enthralled with that series!! 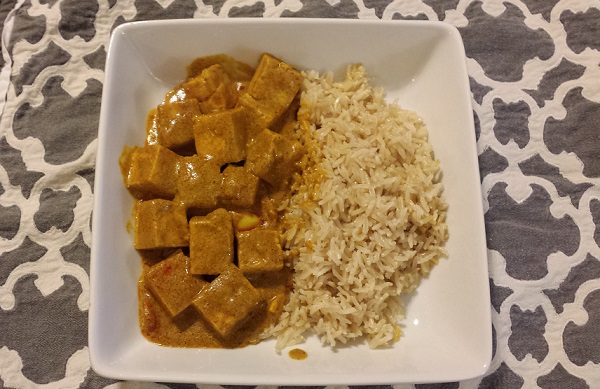 Callaghan enjoys dabbling creatively with Asian flavors in his cooking, and he often comes up with concoctions that are out-of-this-word delicious. This tofu dish was one of them. I can’t tell you what’s in the sauce because it’s a secret (all I know is that it includes masala), but I know it doesn’t contain coconut anything or any kind of nut butter, which makes it unusual. 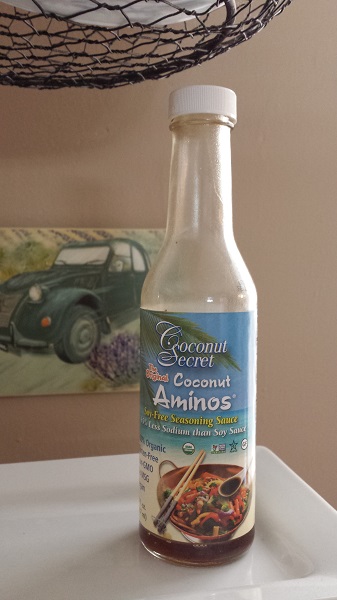 In my recent endeavor to drastically minimize the amount of processed food I eat, a lifestyle change I haven’t mentioned before (I embarked on this journey in October), I’ve been on the hunt for substitutes for old staples. One thing I learned is that coconut aminos make a fabulous stand-in for soy sauce, and in fact, we actually prefer it. No lie. Coconut aminos is simpler than soy sauce, more flavorful, and healthier. Get this: Coconut aminos contain TWO ingredients, zero chemicals, and a mere 90 mg sodium! Compare that to Kikkoman’s “less sodium” (green cap) soy sauce, which contains chemicals and 575 mg sodium. 575. That’s their lower sodium version. We haven’t touched it since we started using coconut aminos (which, by the way, tastes plenty salty to us). Last night, we finally just threw out the soy sauce. Our new motto is coconut aminos or GTFO. 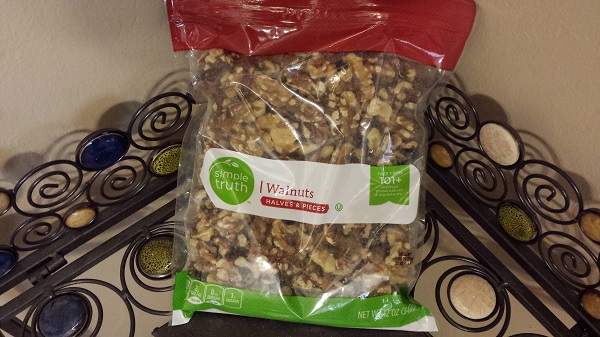 I’ve been eating a lot of these unsalted walnut pieces lately. There’s something about fall that makes me crave or think about walnuts more, and when I get going on eating them regularly, I always wonder why I don’t think of them as much year-round. Walnuts in salads are great, but I also love them by themselves. They’re an awesome source of plant-basted protein, healthy fats, and trace minerals, too. 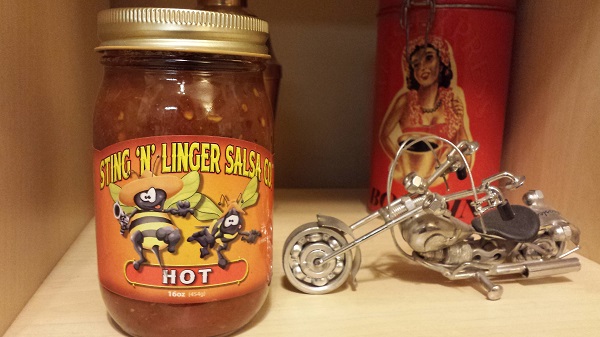 I know I recently included a salsa in a “favorites” post… I know! But I’m back with yet another one, and let me tell you, this one makes the other one taste like glorified ketchup. Sting ‘n’ Linger hot salsa is made locally here in Arizona, and it’s completely unprocessed. There isn’t a single chemical in it, and the flavor is fantastic. We get it at the Tempe Farmer’s Market down the street… I’m not sure where else it’s available, but you may be able to find it online. This stuff is the shizz as far as store-bought salsas go, and that’s coming from someone who’s lived on the Mexican border in three different states her entire life (except for temporary overseas living situations). 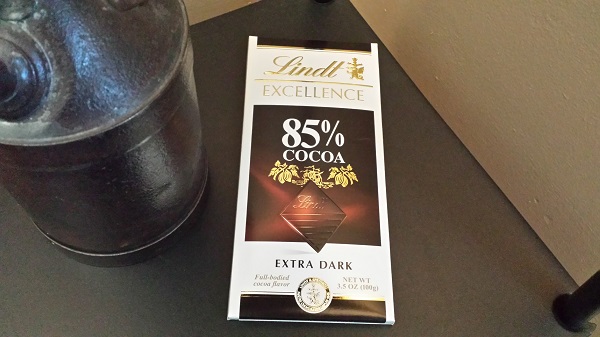 Like walnuts, I cycle in and out of periods of keeping the kitchen stocked with bars of bitter dark chocolate. This one by Lindt has been a favorite of mine for years. I have one or two squares a day, usually in the evening, and I cherish a kind of ritual around eating them: I take tiny nibbles from the square and let them dissolve in my mouth with just a little biting with my front teeth. Somehow, this slow melting prolongs the chocolate euphoria. I indulged thusly all through November, and I don’t see the end of the cycle as of yet.

Now for the T.V. series that took off with our brains (and a lot of our free time) in November…. 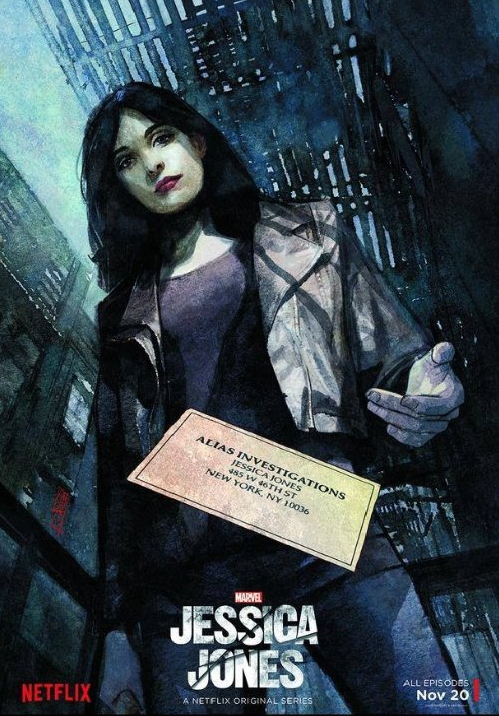 What can I say about Jessica Jones? Stylish. Sexy. Smart. Badass. Beautiful. Oh, and the show itself is awesome, too, in pretty much every way. The only other comic book-based dramatic project I can think of that matches this one in all-around excellence (okay, in my personal enjoyment… I know art is subjective) is the movie Sin City. Netflix does it again!

Moving on to the objects part of the list: 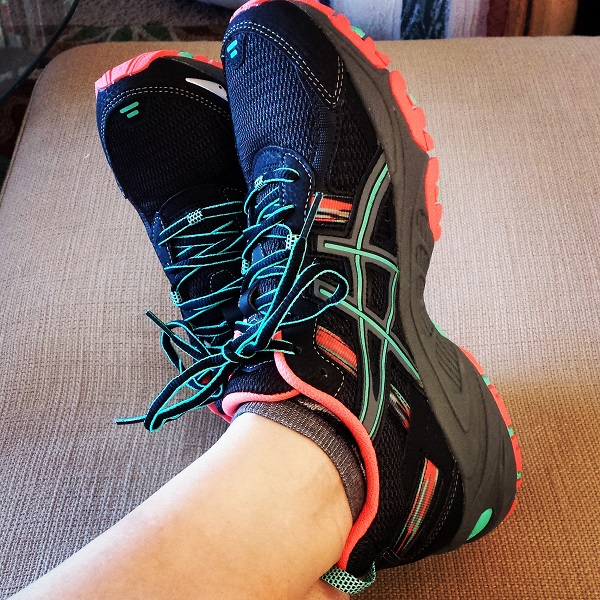 I knew from past experience that running shoes work great for me in cardio/plyometrics situations, so when we started Body Combat and I needed shoes, I got running shoes from Asics, my favorite brand. That was a year and a half ago, and the pair I got were Gel-Venture 4’s. They were amazing. Naturally, when I decided to splurge on a new pair a few weeks ago – my reasoning being that I was walking to and from work again and therefore needed good shoes for everyday street wear – I got another pair of Asics. They’re Gel-Venture 5’s now, and I honestly can’t tell the difference between them and the 4’s, though apparently the technology’s been updated somehow. I love them. Shoes aren’t my thing and I generally dislike shopping for them, but I do get excited about athletic shoes.

Yeah, if I can help it, I prefer not to wear street shoes in the gym. And yes, that picture shows me with my shoes up on the furniture. What.

It might seem silly to put a pen on a “favorites” list, but this pen and I were meant to spend hours together bonding over coffee. You know the feeling. There’s that one pen that feels perfect when you write with it. For me, that’s this one. 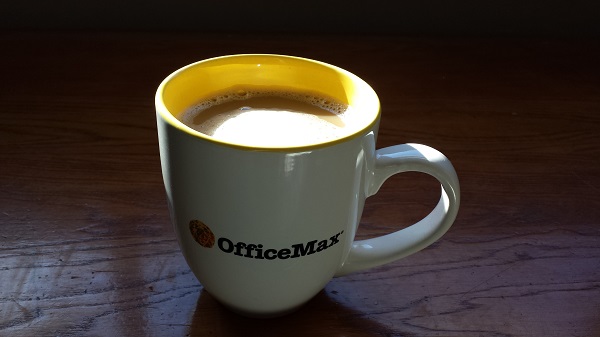 Okay, I have a thing for mugs, and I’m particular about them. I love drinking coffee from mugs of a certain size and shape, so when I found this cheerful yellow one for $2.00 in a clearance bin at OfficeMax, I had to get it. And I had to share it with you here, because it was truly a Little Thing that added to my enjoyment of November. (By the way, this pic makes the mug look a lot smaller than it is. I was more concerned with capturing the sunlight than the dimensions of the mug.) 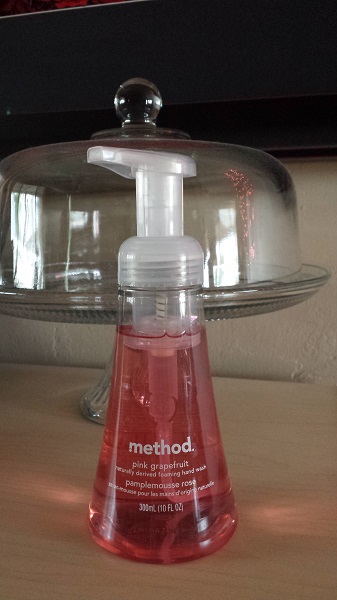 We’ve been using Method hand soaps for years, but we just recently picked up the foaming one in pink grapefruit. Its sparkly, bright citrus scent reminds me of the lemon kitchen hand soap from Trader Joe’s, but I love this one even more. We don’t even care that it’s pink.

A loaf in a bread basket. Classic! The link to my new blog post is up in my bio. 🖤