A while back, we were watching something, and there was a reference to boiling a bunny. Hart of Dixie, perhaps? I think it was Zoe Hart… she was talking to Lavon or someone about Wade – or maybe about George? – saying something along the lines of, “I’m not going to boil his bunny or anything like that.” (I could be misremembering this. Maybe it wasn’t Hart of Dixie at all.) Whatever the case, it made me snicker, and it brought to light an important information deficit. Callaghan didn’t get the reference. It turned out that he didn’t know anything about boiling bunnies, because he’d never seen Fatal Attraction. This threw me off. Callaghan got his American citizenship (he has dual French/American citizenship status) back in 2003, and I don’t know, I guess I’d just assumed that familiarity with Fatal Attraction is some sort of requirement. I mean, shouldn’t it be on the citizenship test? How can you claim to be an American if you don’t know about Glenn Close boiling a bunny? The cliché has become as American as baseball, hotdogs, apple pie and Chevrolet, as the old commercial jingle goes. It’s circa 1980’s American Pop Culture 101 material.

So we watched Fatal Attraction, effectively rectifying the situation. Now, Callaghan has all the background he needs on Glenn Close and boiling bunnies, and he is enriched. His life is complete. What would he do without me?

Being dedicated pop culture afficionados, we ventured downtown Friday night to the Alamo Drafthouse Cinema (Ritz) for The Big Lebowski Quote-Along, so we could sit in a theater with a bunch of fellow Big Lebowski geeks and shout out the famous lines captioned on the screen (lines we all know by heart, anyway), waving our glow sticks for The Jesus and swinging our oversize blow-up baseball bats to show Larry what happens when you fuck a stranger up the ass. Our waitress brought a White Russian for Callaghan, a tall glass of ice water for me, and a huge metal bowl of the best movie theater popcorn we’ve ever had.

The timing was great, since we’d been overdue for a Big Lebowski fix. Satiated, we emerged from the theater onto the thumping street. 6th Street in Austin at almost 2:00 on a Saturday morning looks like this:

Austin closes off vehicle access to 6th Street during the night on the weekends. The bar-hopping pedestrian party needs all the space it can get. 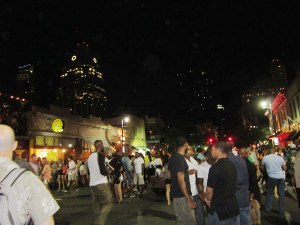 Even the going-home was entertaining! The bus that took us back to our apartment is dubbed “The Night Owl,” but it should be called “The Party Bus,” because that’s exactly what it is. From 6th Street to our apartment. Direct.

No In-and-Out Burger on the way home for us, though. Nor music by the Eagles. You see what happens, Larry?

One thought on ““The Dude’s not in. Leave a message after the beep.””