Friday was my birthday, so I thought I’d inundate this space with some pictures! Surprise! heheh.

First, a brief reflection: I’m now 45. Honestly? The only way I feel different is better than ever. I’m grateful to have no health complaints, I’m happy to finally have a use for the cute reading glasses I got in France, and I’m eager to set off down whatever path the New Year unrolls before me. I always loved how my birthday blends into the New Year, being at the end of December… I never thought of my December 27 birthday as being “unfortunately” lumped into Christmas. It’s all about the New Year, as far as I’m concerned.

Recently, I broke open a cookie fortune and got a fortune that catches my current drift splendidly: 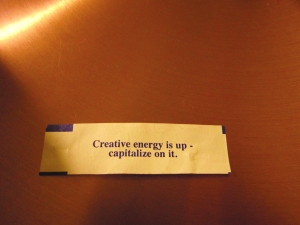 The fortune I got a week or so before my birthday.

Oh, the magic of a fortune cookie! “Creative energy is up – capitalize on it.” Yes. Yes, that is true, and yes, I will!

So, we spent the weekend at some favorite local haunts. First, Callaghan took me out on a lunch date. Deciding where to go was easy – I just wanted to satisfy my craving for Pita Jungle’s certifiably to-die-for lentil fetoosh salad. (The spellcheck wanted to change “fetoosh” to “fetish,” which is pretty clever. That salad has some serious addictive properties.)

–A pedicure with Callaghan. Well, initially it was going to be just me, but shortly after we got there, he found himself getting his feet rubbed, too…the ladies there were quite persuasive, but it took little arm-twisting to get him in the chair next to mine. As the forty minutes of expert and intense foot and lower leg pampering and massaging wound down to its conclusion, he looked over at me and exclaimed, “Wow! I can’t wait for your next birthday!” I think he enjoyed it. 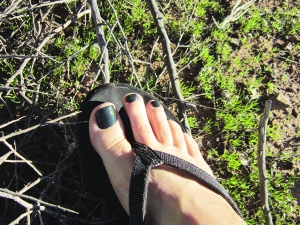 The deep, shimmery greenish-black nail polish I chose is OPI’s “Live or Let Die,” but it should be called “YOU WANT A TOE? I CAN GET YOU A TOE. THERE ARE WAYS, DUDE.” (Though this polish is darker than the Big Lebowski Nihilist Chick’s.)

–A detour through Papago Park on our way home. 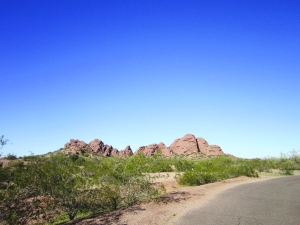 Papago Park – one of my favorite places! 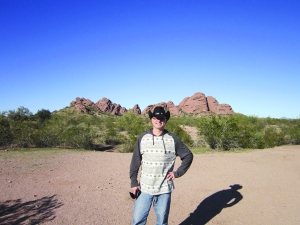 Callaghan and his shadow 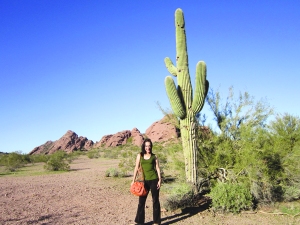 Me and my… cactus!

–Also, after several months of Homeland deprivation, seven episodes suddenly became available… so we holed up for some serious binge-watching. 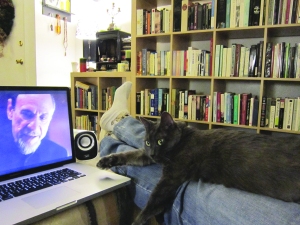 Ronnie James settled himself on Callaghan’s legs to catch up on Homeland with us. 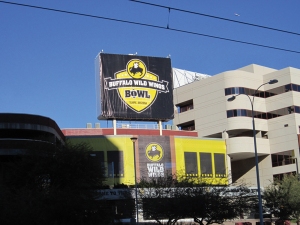 Sun Devil Stadium bore the banner of the Buffalo Wild Wings Bowl for the show-down between Michigan and Kansas State on the 28th.

–We didn’t go to the game, but we went to sit on the patio at Rúla Búla for a little while… 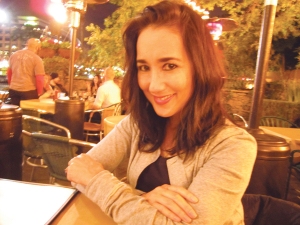 On our way out of Rúla Búla, I glanced up at one of the T.V. screens and winced on behalf of Michigan, because I’m partial to the Wolverines, and man, that score was painful. Final Score: Kansas State, 31; Michigan, 14. Oof.

At least the Wolverines and their attending fans got to hang out in paradise for a couple of days. I’m here to tell you, there’s hardly a sight as gleeful as a Michigan fan skipping down the street in Tempe, Arizona WEARING SHORTS AT NIGHT at the end of December!

–Strolling home, we admired Mill Avenue’s holiday lights, which always stay up until after New Year’s: 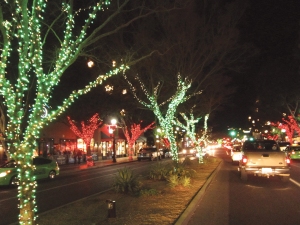 …and here we have my beloved mill, street-side: 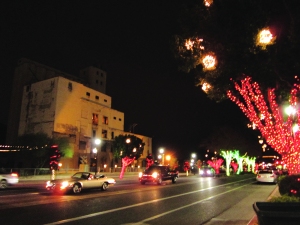 The street-side building of Hayden Mill at night.

I guess if I could marry any building, it would be that mill, haha! 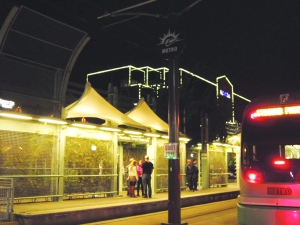 Walking by the light rail station at 3rd St.

–And, of course, there was the Ronnie James. 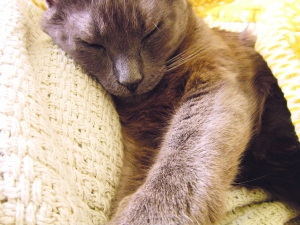