Identity is a spiky thing, a sacred thing, and it’s interesting how profoundly we realize it when our own identities are challenged, threatened or compromised in some way, or when our reputations are sullied, reputation being a facet of identity. We feel protective about our identities like we do about practically nothing else. We know who we are, and we want others to know who we are. (Even more than that, we want others to take the next step and accept who we are, but that’s a subject for a separate post.)

A few weeks ago, there was a muddle about something at work that led to an error and an inaccuracy in someone’s “brief bio” on our website. The person in question made the discovery when he went to check out his entry, and he promptly let me know about the issues in an email.

Now, I don’t usually beat myself up when something goes wrong, but this time I felt a good twinge. Incorrect information about the guy was out there, in public, and that kind of freaked me out because I know how I feel when biographical information about me comes out wrong, or not how I intended it. Not only that, but regardless of the circumstances, I was the one responsible for the snafu. I felt pretty craptastic about the whole thing even though the errors arose from confusion rather than negligence. (And this is why I’m not a surgeon, folks. If I’m going to be involved in mistakes at work, I’d rather they be fixable mistakes. I would rather accidentally butcher someone’s online “brief bio” than amputate the wrong leg. I mean, in that case, you could still save the patient’s life by going back and amputating the correct leg, but then he’d have no legs at all, and that would be an unspeakable, atrocious consequence. Not to come across as flippant about tragic medical errors that actually do occur… just to point out that there are mistakes, and then there are Mistakes).

I got the guy’s WTF email at the very end of the day. After running here and there doing whatever  damage control was possible at the time, I went home, retrieved a small package from the mail, opened it, and found that, in a bizarre coincidence of timing, the same thing had just happened to me! In my case, however, the errors in my “brief bio” were in print, so they were indelible. I did not have the luxury of being able to zip off an email expressing my displeasure and commanding someone to fix the mistakes.

Unlike electronic errors, printed errors can’t be yanked from public view and corrected with a few keystrokes. There are no such magical disappearing acts in print. If your “brief bio” is incorrect and the text goes to press and the ink dries on the paper and the copies are distributed, you will be erroneously represented until the end of time, and there is nothing that anyone can do about it. That is how poor Dr. Sanford Couch came to be Dr. Snaford Couch.

Click the image below to see the publication in question (or to purchase it, if you’re so inclined): 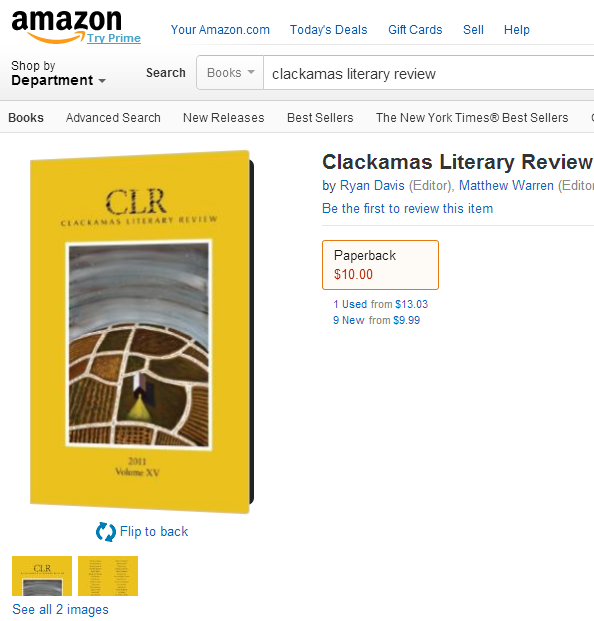 Two of my poems are in here.

The last sentence of my “brief bio” at the end of the book says that I live in Chandler (which I don’t), and that I’m a community college secretary (which I’m not). These things were true when I first submitted the text three years ago, though. I lived in Chandler at the time, and I worked as the Department Secretary for World Languages at MCC for a short while before moving to France.

When the Clackamas Literary Review confirmed that Volume XV would finally be published, I wasted no time in sending them an updated “brief bio” along with the revised poems both physically (to their mailing address), and electronically (to not one, but two different email addresses). Despite this effort and the Editor’s emailed acknowledgement of receipt (Hi Kristi, I received your info and work–thank you!  We plan to have all back issues out by June…) the volume somehow went to press with the outdated “brief bio.” 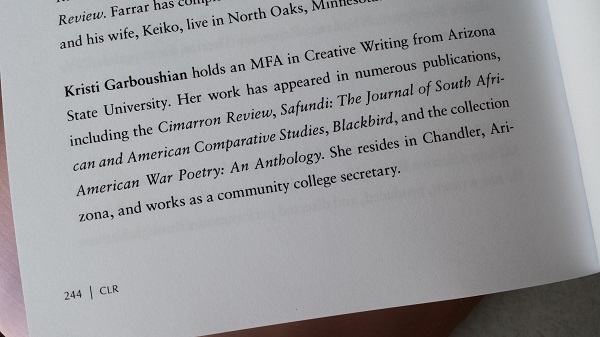 Hello, three years ago me!

I wasn’t angry or upset, mind you… I just noted the oversight with the odd flavor of vexation and wry amusement swirled together on my tongue. I was vexed because this was not my first, but second time experiencing this kind of thing (no doubt this happens to poets, writers and other creative professionals all the time), and amused because of the irony and timing of it, having just come from trying to fix mistakes in someone else’s “brief bio.”

I did not email the Editor to point out the error, or to ask about it, or to air consternation… there was no reason to expend negative energy, and nothing could have been done, anyway. Moreover, to err is human, and who am I to go around acting like people are supposed to be perfect when I often feel more fallible than the average person (whether that’s true or not)? I was just happy to see that the volume made it to press, period… and grateful that my work appeared in it, as always. In the end, it really doesn’t matter that I don’t live there anymore or don’t have that job anymore. People who know me know the deal, and if people who don’t know me pick up the book and think that I live somewhere I don’t and do something I don’t, so what?