I’ve accumulated some furbaby pictures over the last couple of months, so I thought I’d post a few, along with some intelligence from the home front. I’m mainly talking about Nenette, who has been making tentative strides in her transition to life with a family who actually cares for her and adores her, in a house in which she’s free to do what she wants and go where she pleases. We get the impression that this wasn’t the case before.

Nenette has come a long way, but there’s a final frontier: our bed. She’s reposed on the bed on several occasions, during the day, when the bed is made, but she’s afraid to go near it at night when we’re in it. It seems likely that at her former residence, she’d been chased off the bed and menaced away from it.

If we pick her up and gently place her on the bed at night, she’ll leap away like we’d set her down on a bed of hot coals. We’ve been working on it, and we’re happy to be seeing some progress now. Last night, she stood on the bed for a good minute. We watched her and saw the wheels turning (it’s funny how you can see this little girl’s mind working) as she surveyed the landscape and studied Nounours, who was asleep on the blanket at the foot of the bed. It was like she assessed the whole situation and thought about it before she left.

This morning, I woke up to find her sleeping on Ronnie James’ barstool near my side of the bed, which she’s been doing lately – another good sign. If she’s not sleeping with us on the bed, she’s at least sleeping near us. She’s gaining confidence!

Nenette hit her three-month-versary with us three days ago. She’s put on a little weight, she’s learned her name, she’s become significantly more comfortable with us, and, most recently, she’s started to play with Nounours, which is the best thing of all. Managing that situation has been another challenge, though, as Nounours is much larger than Nenette… and Nenette being declawed means that they can’t play on equal ground. He can actually hurt her and not get hurt back. We keep his claws trimmed. We keep an eye on things as they chase each other around, and if they start to tussle the way cats do, we firmly assert the need to play nice if it starts getting too rough. (In French… Nounours knows “Gentil!” better than he knows “Be nice!” Nounours is a French cat.)

So, pics, starting with Nounours.

This is the one that would mortify him if we were to show it to his girlfriend, if he had one:

Nounours hugging his toy, asleep with his mouth open.

Just to show that I’m not a totally mean Mommy, here’s a more dignified one of him: 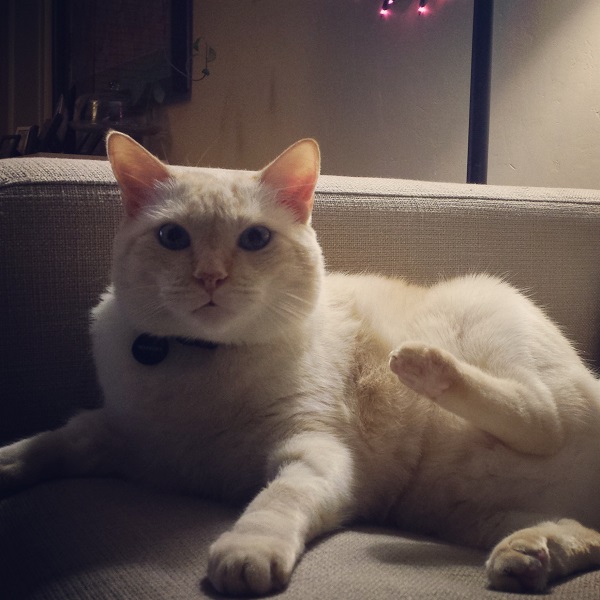 Nounours, the teddy bear lion who was made to be hugged and assaulted with kisses.

Well, almost dignified. It’s not MY fault that he decided to lift his leg at exactly that moment. 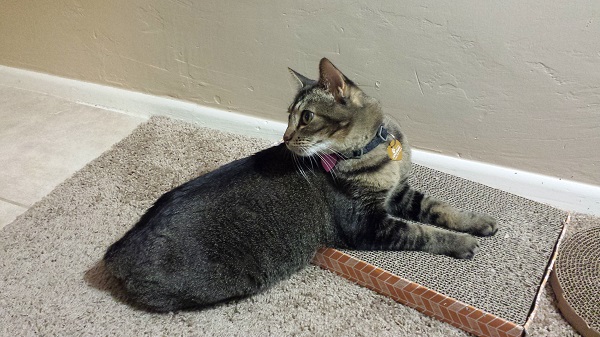 This one’s from August: 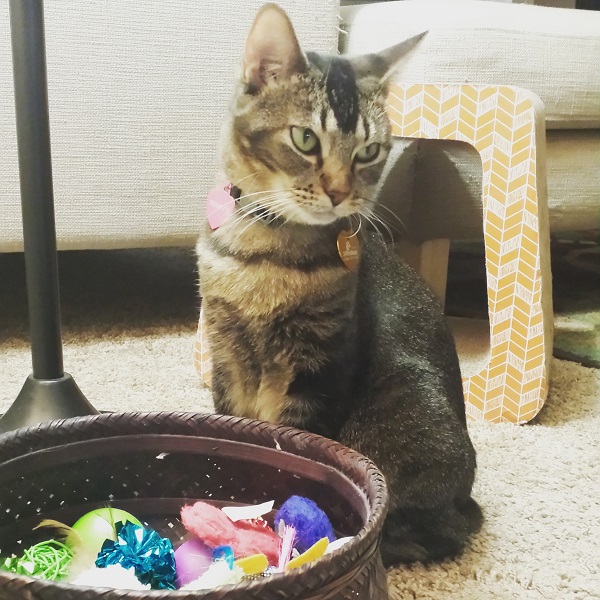 Nenette and her toys and her necklace of informative hearts.

And here they are together! This was a case of Instagram saving the pic from its bad lighting:

Nounours and Nenette, as close as we’ve seen them so far.

It’s a rare opportunity to get a shot of them together, but we’re getting there!. One day, I’ll be able to post a pic of them snuggling together… on the bed.

2 thoughts on “The state of the kittyverse chez nous.”