For this post, I’m blaming the Facebook “post a pic of you and your spouse every day for seven days and tag two of your friends to do the same” meme. I was tagged for it and thought it would be fun, so I ransacked my flash drives in search of pics of Callaghan and me over the last six years.

(On June 14, we celebrated six years together and five years married, but we didn’t mention it on FB this year… so if we’re FB friends and you’re wondering whether you missed it, no, you did not.)

Among the plethora of pics I found was my first attempt at a selfie taken in the mirror, the most common type of selfie I see and the type I still can’t manage to take.

I remember this first attempt. We were living in this apartment building in Nice where Callaghan was undertaking renovation work for an extended period of time (the pic was taken in one of the apartments); I had this camera that was an actual camera, and I was frustrated to the point of sweating in my effort to get this ridiculous selfie:

My mirror selfie game hasn’t improved one bit since then. Here’s the latest one, taken in March this year:

Other people take awesome, effortless mirror selfies. You can see exactly what they want you to see without the camera being in the way. I have no idea how they do it.

I fished out the remaining four of the six mirror selfies I’ve taken in my life: 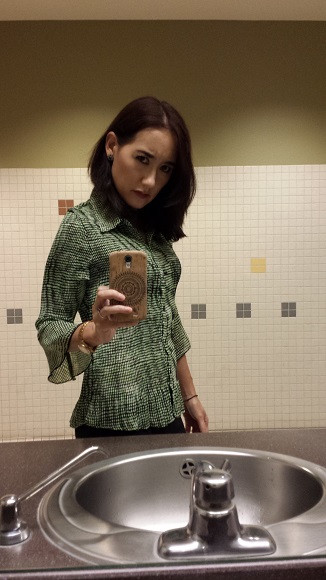 See? I looked pissed off in every single one. Or frustrated, at least. The tank top one was sad and frustrated because I was trying to show the Ronnie James in memoriam paw print tattoo I’d just had done on my wrist. It was 10 days after he died.

Honestly, I don’t know how these kinds of selfies work. It’s an art form notably perfected by gym selfie people and Outfit Of The Day people. It’s a genre of contemporary photography that I’m content to admire as an onlooker, because I have no aptitude for capturing my image in the mirror without looking like I’m having a miserable time ranging from “I’m coming for you mo-f*cker” to “WTF am I even doing right now.”

Speaking of Outfit Of The Day, I have a story for you about how I found Callaghan on the back patio in his underwear the other day, but I’ll save that for another time.