When we gave him up for adoption, our dream scenario for Nounours was that he’d go home with an older lady who lived alone and loved cats and wanted just one cat on whom she could lavish all of her love and attention, all day long.

“Everyone wants that for their cat,” said the adoption manager. “But unfortunately, that very rarely happens.” She imparted the reality gently, with careful kindness.

A group of donors visited the cattery, as groups of donors do, meeting and interacting with the cats. One of them emerged from Nounours’ room and remarked that he would be perfect for her mother-in-law, who lived alone and wanted a cat who would sit quietly on her lap. After just a short visit, it was clear that sitting quietly on a lap was Nounours’ area of expertise.

The mother-in-law came to visit Nounours. She went into his room and stayed for an hour. Then she came out and said that Nounours was The One. When she returned to complete the adoption process and take him home, they opened the kitty carrier, and he “strolled right in.”

Nounours had spent six weeks snuggling and purring his way into everyone’s hearts. He had been very popular at the cattery. He was a rock star, literally… because of his personality, looks, and ability to sit still, he’d been chosen to appear in the shelter’s 2017 calendar. The photographer loved him. All of the shelter workers and volunteers loved him. They were happy for him when he met his Mom and went home with her, but they were sad to see him go, too.

That is Nounours. He is an angel with healing gifts.  We knew that Nounours would be the one saving a life… and he did.

Nounours had several other adoption opportunities, but because of the shelter’s excellent vetting and matching-up process, he went home with exactly the right person for him. Nounours now has all the love, lap-time, and undivided attention he deserves. We are grateful beyond words. 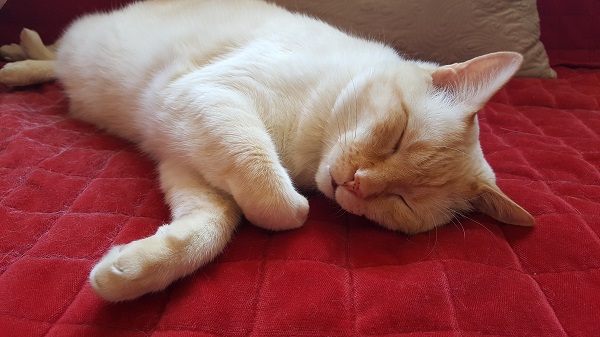 …and we still love him and miss him so, so much.

We gave it a good shot, a solid shot, but all of our procedural efforts were to no avail. Cita is fearful and defensive and cannot cohabit peacefully with another cat. As always, our goal is for everyone to be happy, and her happy place is her (our) backyard. So we took her back to the vet for her booster shots and a flea & tick treatment. She’s now fully vaccinated, flea & tick’d, microchipped, and name/phone number tagged, and she’s back to rolling in the dirt, as happy as a clam. She truly loves to roll in the dirt.

But she does clean up nicely.

Cita: Methinks the bougainvillea pot is incomplete without me.

And this cinder block.

She rarely leaves her beloved backyard. It is her kingdom, and the patio we’ve begun to enclose in greenery is her house. She eats on the cloth-covered table, and for sleeping, she has her choice of four chairs, two barstools, and a cushioned seat. Her preferred bed of the moment is one of the barstools. It’s cool enough for her to go into her laundry room, now, too. We keep that door open for her.

So that is Cita.

And here’s the current state of Nenette: 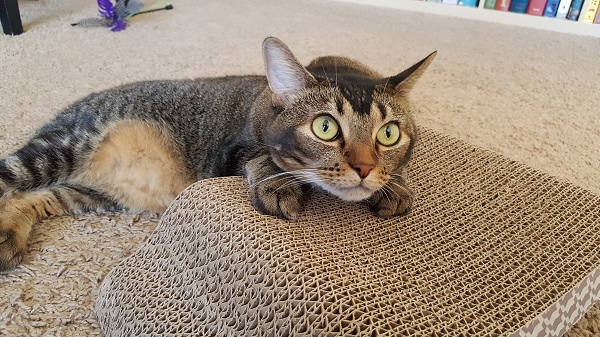 Nenette’s “Why aren’t you playing with me” face. 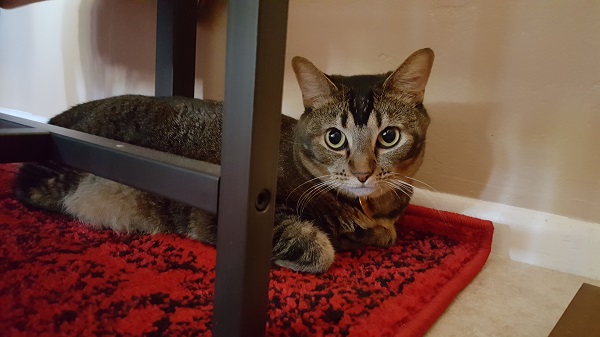 Mom! IS NOTHING SACRED?