Heading into off-season at the amusement parks, Callaghan’s evenings of late have been filled with lots of freelance work. He hung onto a few of his European amusement park clients when he accepted his position as a motorcycle designer, because why not? It’s feast or famine in that industry. He’d only be swamped a few months out of the year.

Now that American Halloween hype has started to gain traction in France, French theme parks want a piece of it in a more major way. So they’ve asked Callaghan to design some clown attractions… because you can’t have spooky, ooky Halloween décor without clowns, of course. If there’s one thing the French have picked up on in their Halloween education, it’s that clowns are essential elements of the fear factor.

Even better, some of this Halloween-inspired design will remain a permanent fixture, so visitors can enjoy the park’s creepy side no matter when they go. Here’s Callaghan’s first design, a rough draft of a horror fun-house-type attraction (with mirrors inside):

You have to have clowns with wide open mouths as entrances, you know.

And there will be more. Oh yes. I’m already imagining waking up at night, shuffling into the kitchen for a glass of water, and noticing a dim screen-light casting vague shadows on the wall. I see that it’s coming from Callaghan’s office. I go in and find that his computer has turned itself on. The clown file is displayed, and it’s flickering.

Thanks, Parc St. Paul. And Festyland (You mean FESTY THE CLOWN-land, I said to Callaghan when he told me the park’s name), and thank you, Parc du Bocasse.

Here’s a draft of his Parc du Bocasse poster, featuring the bee mascot he’s been creating for years: 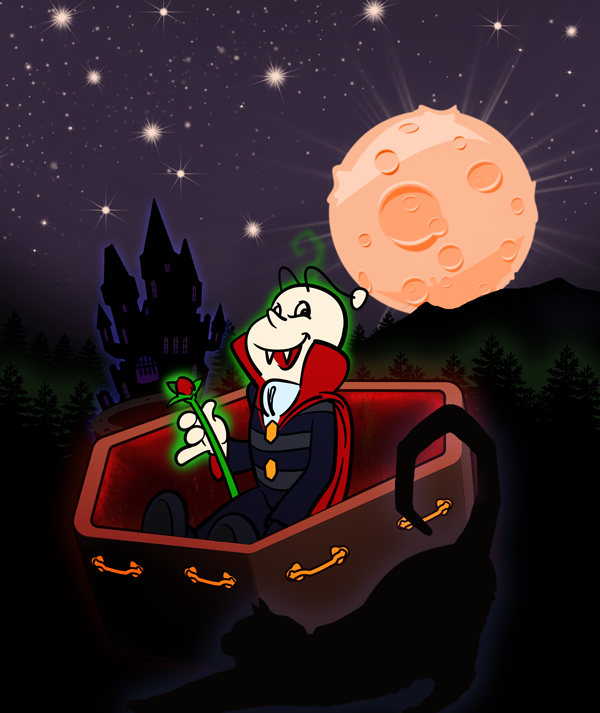 Buzzy (the bee) the Vampire (original art by Callaghan)

He loved my idea of designing a vampire version of the bee. Buzzy the Vampire is made of awesome because Callaghan’s art is kick-ass. It’s great no matter the subject. Even clowns.