Last week, we did Les Mills Body Combat release #70 for the first time. You knew I would come here to share my thoughts, right? heheh.

There’s a big difference between #70 and some of the older Body Combat releases I’ve seen; if you’re a Body Combat purist, you may not be thrilled with the change: #70 deviates from the norm by moving in the direction of a greater fighting condition focus.

For the first time that I’ve seen, there are three warm-up tracks, rather than two. The additional warm-up track is conditioning-intense. There’s a lot of core-work in this release.

There’s a heavier emphasis on muscle endurance in #70. It includes more ground-work… push-ups, mountain climbers, bear crawls, and hip escapes (kick-throughs)… moves we’ve seen in previous releases, but not all in the same release, and not so much in the warm-up and throughout the tracks. #70 also has you doing squats and sprints. You don’t get into fighting condition by just striking and kicking, after all. Les Mills is amping it up.

There’s also the addition of a boxing defense technique I haven’t seen in Body Combat yet: the parry (in track 4).

The music: #70 moves away from the usual dub-step/trap-heavy commercial song remix tracklist. #70’s tracklist is more like, Les Mills Went to the Club and a Rave and Got Inspired. It’s 50 minutes of electronica (EDM, electronic house, drum & bass, hardcore), plus a little hip-hop. Tempos vary to accompany the choreography, of course, but overall, this tracklist is like there’s a DJ in the house.

Electronic music tends to be a love or hate thing, so if you’re not a fan, you may not feel as motivated by #70’s tracklist. If that’s the case, you can use it as an opportunity to focus on form even more. This music isn’t so much do I like this song as it is about the drive behind it. 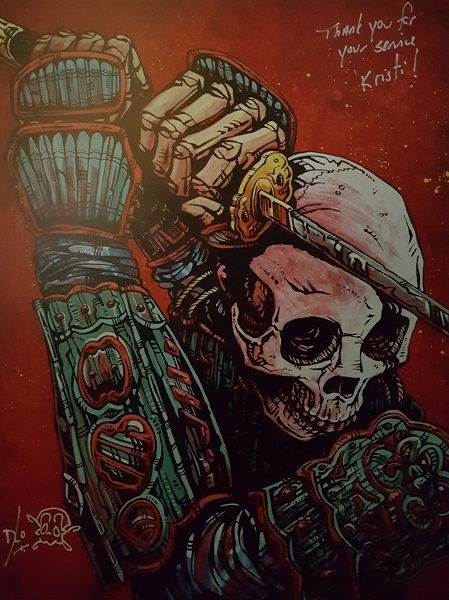 (Yes, this is the third time I’ve posted a pic of this print since Callaghan gave me the print a month ago. It’s my favorite of all the gifts he’s given me, period.)

I’ve decided that this particular Samurai ancestor is my spirit animal.

The workout: Upper-body warm-up with combinations of the usual punches, 1-2-3-4. Jumping jacks. too.

The workout: Again, combinations of typical lower-body moves: hip rolls and front, roundhouse, side, and back kicks.

Music: Electronic. (Slower tempo, good for the core work in this track)

The workout: (Upper-body) Slow-tempo uppercuts from a front stance (modified horse), involving more upper-body lateral movement than usual. Then a tempo-increase for typical punching combinations. Then back to the slow tempo, but the lateral move is with rather than upper-cuts. [EDA: There are no hooks! Just uppercuts, jabs, and power jabs. The power jabs are added last, rather than hooks. Apologies for the goof!!]

The workout: (Lower-body/upper-body) Knees and kicks building to jump kicks. Then a striking combination that finishes with a parry (defense) before launching into a jump kick.

The workout: (Plyomectric lower-body conditioning) Alternating front kicks jumping down to squats. Then just jumping out to wide squats with pulses, alternating hands to ground.

The workout: Usual Muay Thai combination (jab/cross/ascending elbow, two back knees, option to make the second knee a jump). Then running-man knees. I’ve seen more involved Muay Thai tracks than this, but it’s still a good track, and your legs are already dead by the time you get to it, anyway.

The workout: The usual upper-body finisher with jabs/crosses/jump jabs/power hooks.

Track 9: Conditioning [Don’t Let Me Down- The Chainsmokers ft. Daya ]

In summary: LOVE IT. #70 is a conditioning-heavy, cardio kickboxing extravaganza of punishment with a soundtrack that works well, too. Can’t wait to see what Les Mills does with #71!

Speaking of bodies being machines, the link to my new blog post is up in my bio. Last Sumo Haiku post! 🖤 #sumo #haiku #nahaiwrimo #poetry #nofilter