Late Tuesday afternoon last week, Callaghan happened to check the skin beneath Cita’s fur on her backside, where her open wound had been. When we found that the wound had re-opened, we called the vet and arranged to take their open evening appointment slot.

At the hospital, the doctor looked at Cita and then took her to the back to have the area shaved for closer examination. Cita was returned to the room with two large shaved patches on her back end and hindquarter. We saw her old wound, open and oozing and rounded, just like it’d been before it healed. We also saw five more wounds exactly like it. It made no sense. She’d been indoors and pampered in a protected environment for four months.

The next day, Cita’s test results came back, and our baffled doctor consulted with Dr. K, who, with his expertise from many years of experience, determined that Cita was suffering with Opportunistic Mycobacteriosis. We weren’t looking at wounds. We were looking at lesions. Dr. K had only seen the disease twice in his long career.

[Click here to read about mycobacterial diseases in cats]

[And here’s another site on the subject of Opportunistic Mycobacteriosis]

[ETA: Here’s yet another one]

It turned out that just like Ronnie James, Cita was suffering with a disease caused by an environmental menace, and it was uncommon enough that it escaped detection until the end. Ronnie James had come into contact with a poisonous caterpillar in France. Cita had come into contact with a mycobacteria, most likely from soil. Cita had loved to roll in the dirt. The mycobacteria in the dirt probably entered her system through a puncture wound.

We were shocked, but thinking back, we realized that we never actually saw Cita get attacked. We’d seen her getting chased, and early in the fall, we observed tiny puncture wounds after one such incident… so when her first lesion appeared at the beginning of November (the night before we left for my brother’s wedding), we just assumed that the horrible wound had come from an attack.

We recalled how the doctor at the emergency hospital remarked that Cita’s wound didn’t look quite like a cat fight wound. We went back through our paperwork and saw that the doctor had written “dog bite,” and we remembered that she’d hazarded that guess.

All of our assumptions had been based on circumstantial evidence. We’d seen Cita instigating fights by growling at cats, and we’d seen her running away, rather than fighting. We just assumed that the wound had come from a cat jumping on her back as she ran.

(I’ve always been against the notion of cats being outdoors; my cats have always been indoors-only. Cita had been an exception because of the details of her rescue from the street. Despite our strenuous efforts, it wasn’t working out with Nenette, so we had to release her back to her backyard patio and her outdoor laundry room.)

With her diagnosis, everything made sense, especially the solid thickening in her lower belly that no doctor had been able to figure out. At one point, we followed one doctor’s advice and scheduled a surgery for exploration and to remove whatever was in there, but when we took her in for the surgery, the surgeon recommended sparing Cita the ordeal. We’d had X-rays taken, and our surgeon also took Cita back for an ultrasound. None of the tests showed a tumor or a hernia, so we agreed on a “wait and see” approach.

We’re so glad that we did. Cita’s disease was advanced, and no surgery could have saved her.

Since we didn’t know what was going on back then, we re-started a course of antibiotics, plus a painkiller. Cita got better. Her wound closed up, and she was feeling well. She was taking an anti-anxiety medication so we could ease her second introduction to Nenette.

And that medication was working: Cita and Nenette were eating breakfast and dinner together, facing each other through a baby gate under supervision. There was no growling. It was a much different story than early last summer. Cita and Nenette seemed comfortable together; we’d gotten them to the frenemy stage, and we’d planned to take the next step in mid-May.

Cita was happy and relaxed, as playful and affectionate as ever. We spent most of our time with her in her “apartment,” which she loved. She had her favorite scratch pads from the patio, all of her toys, including her precious salamander; she had multiple bedding areas and surfaces to climb. She had houseplants and her cat tree by the window, and she loved sitting on the highest level, enjoying the spring breeze through the screen and watching the birds.

When we received Cita’s diagnosis, we were told that we could battle the disease with another aggressive course of two different antibiotics over an extended period of time, though her prognosis was abysmal. We bought the first round of antibiotics, but instead of starting her on them, we read the websites and talked about the situation all night. We decided against prolonging Cita’s life with a miserable routine of twice-daily medication and discomfort; we didn’t want her last days to be terrible.

We’d given Cita the best life that we could, and now we wanted to give her the best death that we could. We wanted her passing to be happy, beautiful, and dignified.

On Thursday afternoon, Cita received a sedative and painkiller cocktail to help her slip into sleep comfortably. She fell asleep happy in her Daddy’s arms, with me kissing and stroking her face and head. The last thing she heard was us telling her how much we loved her, and me saying, “Sleep well and have good dreams,” as I’d done every night while tucking her in. Once she was asleep, we gently laid her down on the table so the doctor could administer the second injection – the one that would stop her heart. She didn’t know that it was happening.

We’re so grateful that she adopted us, so honored that we’d had the privilege to make her last few months of life happy ones. She was pampered and loved probably more and better than she’d ever been. Just like Ronnie James, Cita was pure love and sweetness. Everyone who knew her loved her. She effortlessly stole the hearts of everyone at our veterinarian hospital – the receptionists, technicians, doctors.

We asked for her cremains to be returned to us in an open urn. We’re going to scatter her ashes amongst the plants, trees and flowers in our backyard. She’d loved accompanying Callaghan as he’d go around watering everything. She loved her flowers. 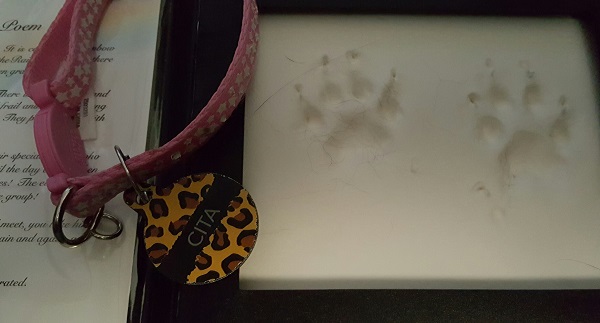 Here are the pics of Cita I’d prepared for the post that was supposed to be a kitty update post:

Cita at the vet.

Cita watching over our front yard from her “crow’s nest.” 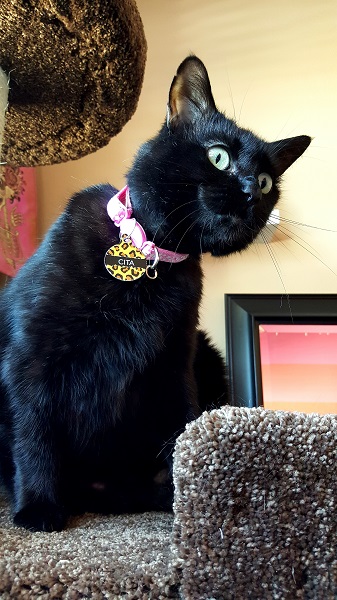 Cita falling asleep while looking down on me. 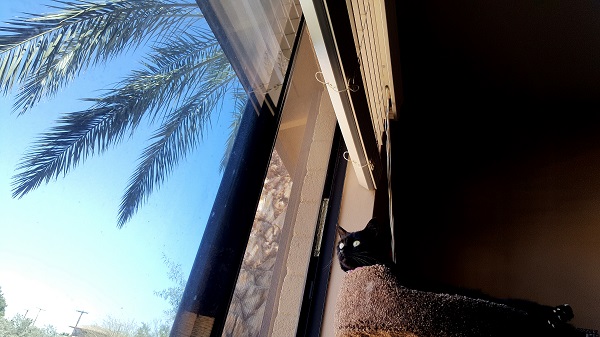 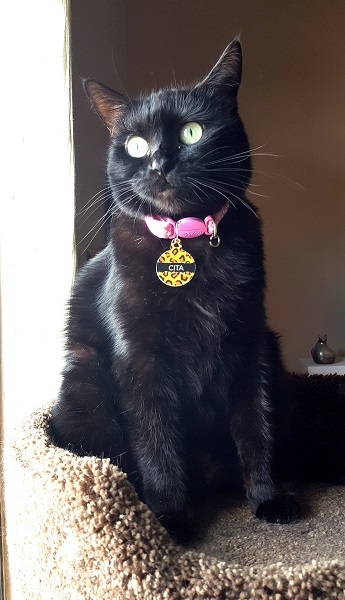 Cita on her last day.

Thank you all again for your good thoughts and kind and compassionate comments. We appreciate them more than you can know.