Wednesday was our wedding anniversary. The sub-title of this post could be: “We’ve been married for 6 years and to celebrate we went out and Did Non-Everyday-Things.” Callaghan took the day off so we could spend it together.

The first exciting thing that happened was the doorbell rang and a minute later Callaghan called out, “It’s a package for you!” as he came into the bedroom where I was getting dressed, and he dropped the package onto the bed and walked out, leaving me to think, “He got me something for our anniversary??” (We’d agreed no cards, no gifts.) So I opened it and found a Black + Decker 16v cordless hand-vac, which I’d been wanting for the longest time, and which I grabbed while running to the other end of the house all like, “Baby!! THANK YOU SO MUCH for the hand vac!! Best surprise anniversary gift ever!!!!!” as I jumped into his arms, to which he replied, “I didn’t order you that.”

Long story short, we found out that my parents ordered it for us for our anniversary, knowing that I had my eye on it. It’s been one of those things that I wanted, but never wanted to spend money on.

Anyway, still. Best anniversary gift ever! Best parents ever! The hand-vac has already changed my life.

The reason we didn’t exchange cards or gifts was that we had an expensive plan for the morning: going to our favorite firing range to rent weapons and practice shooting. Even with Groupon, the whole thing cost us $140.00, and that was only for 40 minutes of shooting. Seriously, how do people afford to do this on a regular basis?! I suppose, for one thing, they own their own firearms. We never will, so we rent them when we want to shoot. Firearm rental is expensive. Ammo at the range is expensive (unlike at Walmart). Hence, the firing range is a special-occasion date activity.

In the afternoon, we went to the Phoenix Art Museum for our second date activity: the “Samurai: Armor from the Ann and Gabriel Barbier-Mueller Collection” exhibition. We’d known that the collection was there, thanks to some of you! We remembered it while finishing up the first season of Fargo not long ago, when we had this conversational exchange:

Callaghan: I thought that was what I got when I got married.

Me: Ha! So what did you get? The English Rose?

Callaghan: No. I got the Samurai.

Then he quickly added, “And it’s perfect!”

And this, my friends, is one thing I appreciate about Callaghan so much. Seven years together, six years married, and the guy is still making me laugh. I have no complaints.

Such as it was that we went to the Phoenix Art Museum to see the Samurai exhibition.

If you can get to the Phoenix Art Museum before July 16, I highly recommend that you go check out this exhibition! It is spectacular.

The first thing you see when you enter the gallery is a large statue of the Buddha. The sight of the Sakyamuni Buddha entrances me instantaneously, so I had to linger a few minutes before going in… and, of course, take a selfie with the Buddha. 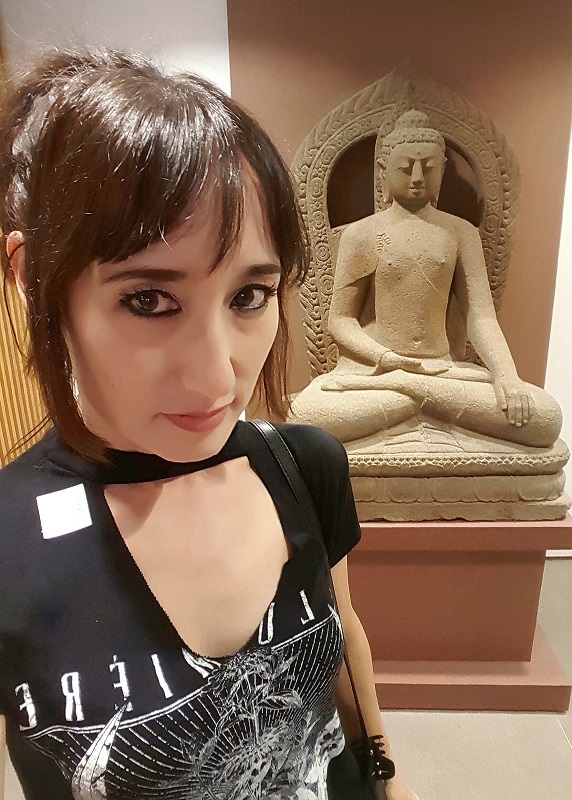 With the Sakyamuni Buddha at the Samurai Armor exhibition, Phoenix Art Museum 2017

Worth mentioning right now: the strategic play of lighting and shadow fluctuates throughout the gallery, and you’ll see this variation in these pics. Here at the entrance, it’s extremely bright. That white square on the top left of my shirt? That’s a sticker that reads “Samurai” in black letters. The light was so bright, it washed out the lettering completely! (I didn’t even try to bring out the lettering with filters or anything like that; I left these pics as-is.)

You can see the lettering here, though, with just a slight change in distance and angle:

Me, Callaghan, the Buddha. Not in that order.

Let me tell you, it took a lot of finagling with the phone camera position to get the three of us into this shot!

The reason the Buddha invites visitors into the samurai gallery is that Buddhism and its philosophies and motifs informed the design of the warriors’ armor and weaponry to a great degree; the religion was a part of samurai culture. “Buddhism was widely adopted by most samurai,” says one of the plaques inside the gallery.

Despite this fact and the fact that Buddhist warrior monks developed a deadly martial arts system that engendered all of the martial arts schools in East Asia (many of which are prevalent in the public eye today, as they’re included in an MMA artist’s arsenal), there’s still this myth that all Buddhists are strict pacifists, and that pacifism defines Buddhism. This may be due, in part, to Buddhism having become widely New-Age-ified in the hands of western seekers.

And so the Buddha welcomes you into the samurai warrior gallery. The exhibition consists mostly of armor, but you’ll also find weaponry and other objects particular to samurai culture. Truly, everything in this gallery is an exquisite work of art.

[click to enlarge if you wish to read the plaque]

Like this one, many of the helmets and masks were adorned with Buddhist symbols. One plaque explains: “The adornments are influenced by the philosophy of Buddhism, a religion that greatly inspired Japanese warriors.”

Another plaque says of its subject: “The shape of the helmet is reminiscent of the cloth headdress (tokin) worn by Buddhist ascetics and warrior monks (yamabushi) who lived in remote mountain areas.”

Here are a few more pics, to give you more of a taste of the exhibition:

Did you know that samurai warriors battled with firearms as well as with bladed weapons and bows and arrows? I didn’t.

Another plaque explains: “Though archery eventually gave way to the use of firearms in combat, the bow continued to be venerated, and archery remained a martial art that every samurai was expected to master.”

And another: “Shogun Takugawa Leyasu described the sword as the soul of the samurai.”

The exhibition includes chest plates with bullet marks and traces of sword-slashes. (Impressively, the bullets did not pierce the armor.) I didn’t take pics of those, though, for some reason. I did get some of the mounted warriors: 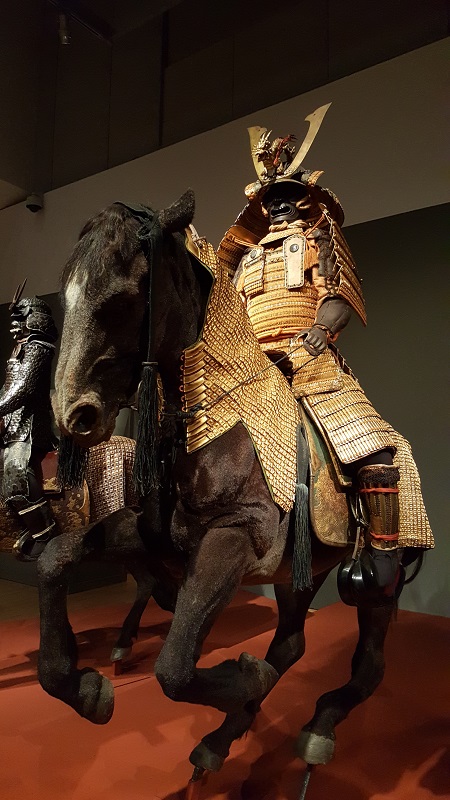 I wouldn’t want to meet this guy coming out of the fog. 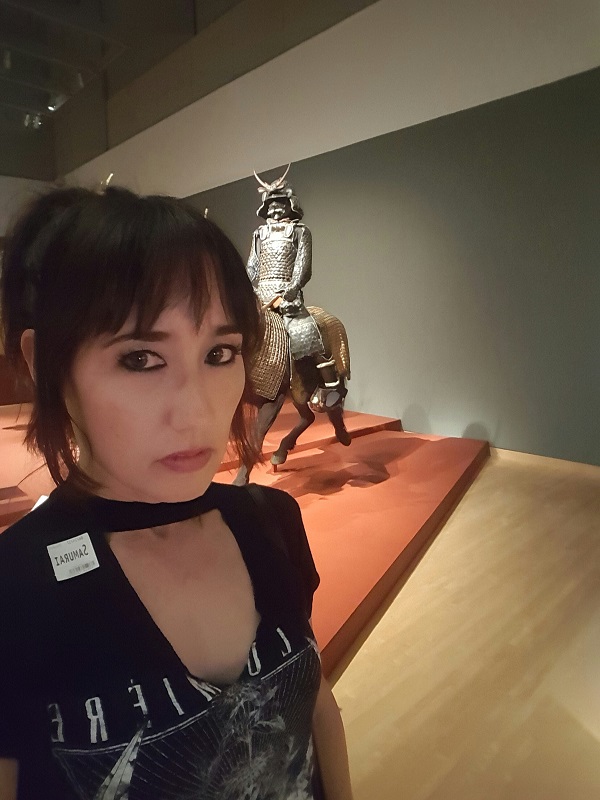 WHY SO SERIOUS? ~Of course I had to get a selfie with a samurai warrior lurking in the background.

Remember: this gorgeous and awe-inspiring exhibition will remain at the Phoenix Art Museum until July 16!