I don’t usually come at you with far-out stories, but I read something interesting the other day, and I had to share it. It’s kind of a weird story:

The first night Callaghan and I spent in this house, we both dreamed about Nazis.

We were both in each other’s dream, and our dreams were similarly, unusually detailed and eventful, marked by a sense of vivid awareness. “It was so real” – that kind of dream awareness.

Within minutes of waking up, we told each other what we’d dreamed. We woke up and said, “I dreamed about Nazis,” and then found out that the other one did, too, and not only that, but we were in each other’s dream, and the story-lines of our dreams overlapped.

Of course, we were kind of creeped-out to learn that we’d basically had the same dream. About Nazis.

In Callaghan’s dream, he and I were with a hundred other people engaged in some sort of battle at a Bavarian castle, and only 10 of us made it out alive. The Nazis, he said, were turning into actual demons.

Totally over-the-top, right? As in, the brain takes something random yet specific and drops it into LSD before releasing it into your dreams… that kind of over-the-top.

Totally over-the-top, totally out-of-the-blue. It wasn’t like we’d recently seen a movie or anything on T.V. about WWII, either.

So what could have caused us to both dream about Nazis? And why on our first night in this house – and only then?

Maybe, we speculated, a Nazi lived in this house at some point. The house was built in 1958; it was possible, though unlikely, we thought, that a German war criminal lived here in Tempe, Arizona.

This brings me to the weird part: The other day, I stumbled upon this bit of trivia on the “interesting facts” page of “things to do in Arizona” (last bullet point):

The largest escape from a U.S. Prisoner of War camp during WWII occurred in the Phoenix area at Papago Park POW camp. 25 German prisoners escaped.

Papago Park is a five-minute drive from our house.

Our house was built in 1958, 13 years after the war, but being in the vicinity of the POW camp, we’re thinking it is possible that a Nazi or two (or 25) made their way across this land. We’re thinking that it’s maybe more than likely, because we did both dream about Nazis the first night we spent in this house.

It’s just too uncanny. It seems to me that we picked up on some sort of residual historical energy that first night here.

Anyway, apropos of nothing, here’s a gratuitous selfie I took for no reason at all except that I was outside (yesterday) and felt like taking pics: 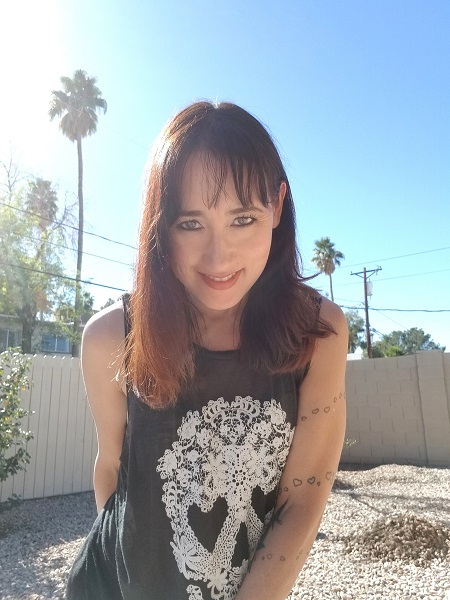 If you will, please admire that gorgeous fence behind me (on the left side of the pic), as Callaghan has worked hard building it! He just finished it. This weekend is going to be all about building a kick-ass tortoise burrow. I ordered two tons of dirt to be delivered tomorrow. Exciting times!