Now toward the end of summer, we’ve learned yet more about our Geronimo as we’ve continued to observe his patterns of behavior this first cycle of seasons with him. The main thing we’ve discovered recently is that we have a personal meteorologist who has a built-in Doppler Radar. Geronimo tells us when it’s going to rain. We have a Geronimeter.

Monsoon season began in July, as monsoon season does. We were in the backyard when the first dust storm rolled in and dropped the temperature along with it. We looked over from the patio and saw Geronimo’s little nose poking out of his burrow. The wind picked up as the sky darkened. A wealth of mesquite pods swirled into space and landed in our yard. (Thank you, neighbor.) The rich scent of creosote saturated the air… classic indication of imminent rain in the desert.

Geronimo readied himself at the entrance of his burrow as we stood on the patio in the blowing dust, all three of us watching the storm unfold. As soon as the rain began to fall, he came out and marched all over the yard, up and down along the back fence, patrolling his perimeter with a joie de vivre unlike any we’d seen in him before. He was clearly in his element.

He’s since settled into a routine of coming out at night to crawl into the mass of verbena along the side fence, walking his back-fence path when he wakes up in the early morning (eating any hibiscus flowers and buds he can find along the way), and retreating to his burrow to escape the daytime heat. He’s back in his burrow by around 8:30am. The storms usually move through at dusk or later, and he comes out to revel in the rain. That’s Geronimo, living his best monsoon life.

I wish I had pics of him in the rain to share here. Unfortunately, cell phones and rain don’t mix. Monsoon winds blow the rain onto the patio; nowhere remains dry. I have a few general pics of him, though (actually screenshots from video clips).

On a typical early-morning before the day heats itself into oblivion:

We’ve stopped soaking him and instead have placed his bath/water dish on the ground in front of his fence. He has fresh water in the dish every day, and he knows where to find it. If he needs it, he clambers in. If he doesn’t, he goes around. 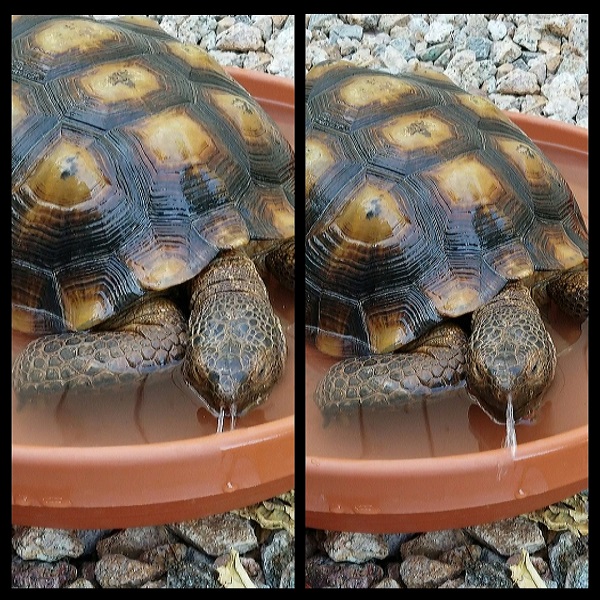 This dish is actually a large plant saucer (I can’t remember whether I’d mentioned this in previous posts). 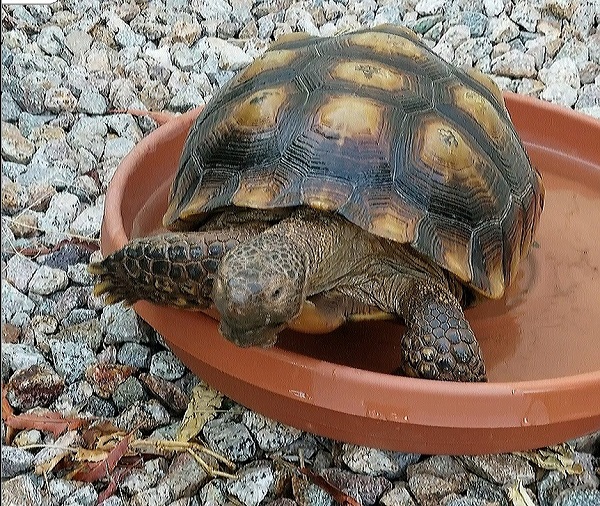 Things to do, places to go…

That’s all I’ve got for this update! Next month, Geronimo’s vet will notify us to bring him in for their annual pre-hibernation clinic and screening. It’s unreal that the summer’s almost over.

Spring flowers that I bought for myself for no occasion. 🖤 The link to my new blog post is up in my bio... January / February favorites! #nofilter