A typical overcast sky darkens the house, but today, the house was filled with an eerie, radiant white light. It was an unusually bright overcast that uplifted my mood rather than bringing it down. I also delighted in the unexpected realization that I love the wind. That was today: a luminous, ghostly overcast day with a chilling wind to animate the outdoors. It was magical.

Now it’s raining again, and the temperature’s dropping. We’re down in the low-40’s. We’re definitely having some weather, which is a big deal in Phoenix. Our weather dramatics come courtesy of snowfall up north: today was allegedly the “snowiest day EVER recorded” up in Flagstaff!

Geronimo is snug in his burrow enjoying tortoisey hibernation dreams. Nenette is sleeping in her crow’s nest here in my office. Salem is wherever Salem goes when she’s not in our yard. It’s supposed to drop down into the low-30’s tonight with continuous rain, so I hope Salem can sleep in her laundry room bed! I mean, I hope she feels as welcome there as she usually does.

Because that other cat came around to spray Salem’s bed again last night. The laundry room had a revolving door this afternoon as I went in and out to deal with various stages of laundry and bouts of thorough cleaning.

I swept, mopped (twice), re-made Salem’s bed with clean bedding, scrubbed down the table legs around Salem’s bed (because cat spray got on one of them), scrubbed the bottom halves of the washer and dryer faces, scrubbed the table legs again, and then again, using soap and water and different cleaners each time. Finally, I gave up and lit a pet odor enzyme activating candle (or whatever it’s called) in there, because after all of the cleaning I did over the course of four hours, I could still smell the cat spray. I thought I could, anyway.

I hope Salem doesn’t smell it, because she won’t sleep in there if she does, and it’s going to be cold.

We witnessed the spraying disservice to Salem after the fact. Our cat cam captured the whole thing, starting with the criminal cat entering the laundry room at 1:57am. Check him out in this still:

breaking and entering with malicious intent 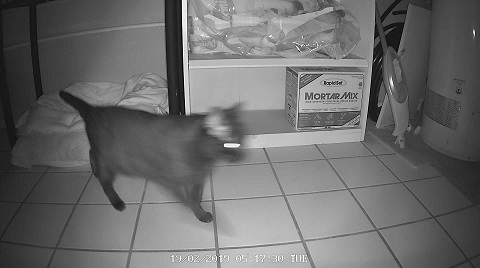 There’s nothing we can do to keep this other cat away, right? I suspect we’re facing a losing battle, as they say. What else can be done but clean and clean again?

But it was a gorgeous day today.

I am floored. I'm in my backyard right now looking up to the southeast, just above the horizon, at this enormous bright light. I whipped out my app to see what this crazy huge star could possibly be, and it is JUPITER. A little ways over to the right? SATURN. I can hardly breathe. I cannot get over the splendor in the sky. What I would give for a telescope right now!!! 🤩