The hour is beyond nigh for this post, and my brain is wrung out.

Hello. I’m writing this from a forearm plank position… just this one sentence. Did you know that this was possible? Neither did I. It never occurred to me before, anyway. I’m not sure why it did now. I’m going to blame it on the virus, which I don’t have, by the way.

If you’re not familiar with the plank position, then this is for you:

What you do is you set your laptop on the floor and lie down in front of it on your stomach, like you do, all stretched out and comfortable, your forearms resting on the floor. [<– That is not a part of the plank position. This next part is. –>] Then you flex your feet forward so your toes (actually more the balls of your feet) are planted on the floor, and you raise your body up so you’re supported only by your forearms/elbows in the front and your toes/balls of your feet in the back. Your fingers would be left free to tap the keyboard. Except I’m not suggesting that you do that. That is not a part of the position.

I won’t be writing in the plank position, either. It was just an interesting thing to try. It got me thinking, though, that it might be cool to watch something on the computer while lying on the floor and holding a plank every so often.

I grabbed this image in a hurry just to show you what I’m talking about. This is not an ideal demo pic. The quality and lighting are lacking, for one thing, and for another thing, I’m wearing this big, baggy shirt that’s draping to the floor. It’s rather unfortunate, but just to give you a general idea: 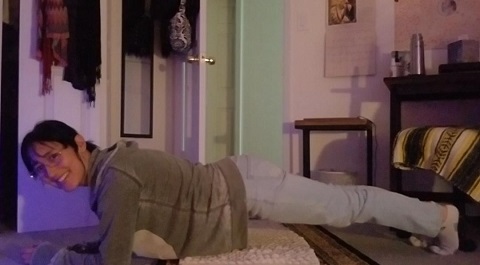 Watching videos or episodes or movies or whatnot is a sedentary activity, but if you lie on the floor with your computer and elevate yourself to a plank position for even one second, you’re suddenly doing a one-second, full-body strength-training workout while watching whatever you’re watching. You’ll feel your entire body working to keep itself propped up. This is not easy. If you can do it for even one second, you’re a rockstar.

Humans like a challenge, and humans wouldn’t enjoy eating snacks in the plank position. That was the thought that struck me. I’ve eaten way too much in the way of snackery while watching T.V. or whatever. Doing this plank thing would be a satisfying diversion. Really!

I just thought I’d offer a fun suggestion for all of our housebound butts. Everything is different and weird now, anyway, so why not?