There was no “Please Wait to be Seated” sign – it was a “Seat Yourself” kind of place.

I seated myself at a round stone table near the edge of the balcony. The patio was empty, but that detail appealed to me greatly.

There was no server, but I had a cloth bag containing the lunch menu du jour, or, shall we say, du mois: a peanut butter and blackberry jam sandwich (peanut butter: 365 creamy; jam: Kroger’s Just Fruit; bread: Dave’s Killer Blues), which appeared alongside a Ziploc baggie of popcorn (plain, lightly salted). I’d already partaken of an appetizer… the roasted walnut halves and pieces provided a preliminary protein boost. The beverage accompanying the main meal was filtered water on the rocks in a tall, insulated glass.

I’d give it an “A” for atmosphere. In the aftermath of an almost-hurricane, what would have been the third in a string of unusual, late-season tropical storms, the temperature was mild and pleasant, neither hot nor cold, humid nor dry, windy nor stagnant. The sky was clear, bright and blue.

The view was splendiferous.

My dining companion was a guy on the phone whose French accent I might have pondered had I been paying closer attention to accents. I was more interested in the mundane details of what he was saying – that his vegetable stir-fry was even tastier than it had been the previous day (aromatic leftovers), that the Wrah-Wrah was fine after two asthma attacks (and being extra-cute), that the new Indian deli’s Grand Opening is on the 23rd (free food!), and that a client would incur additional charges for extra technology work (business as usual).

Outside of the conversation, the soundscape featured the periodic splashing of a waterfall on asphalt, and airplanes cruising overhead, descending for landing every five minutes or so. More distant, the sound of people talking and music playing filled in the void that asked for white noise.

It was a good patio-dining experience. I’d give it 4.5 out of 5 stars.

(Alternately titled “I ate a sandwich by myself on the patio, and I enjoyed it” in 331 words.)

Ever since Callaghan started lifting weights seriously… so that would be since March… he’s been in the habit of commenting on the size of the calves he sees on men in the gym. His remarks are always in the context of the proportion of the guy’s calves to the rest of his body, usually to the effect of, “I saw this guy and I don’t understand why guys refuse to work their calves! This one guy’s upper body was massive, but his calves were like twigs! I never forget to work my calves. I don’t want to look like that.” After which we spend a half hour or so debating genetics vs. strength-training for calf muscle shape and development, the merits of various types of calf exercises, plastic surgery (faking it with calf implants) and sheer negligence in training the calves. 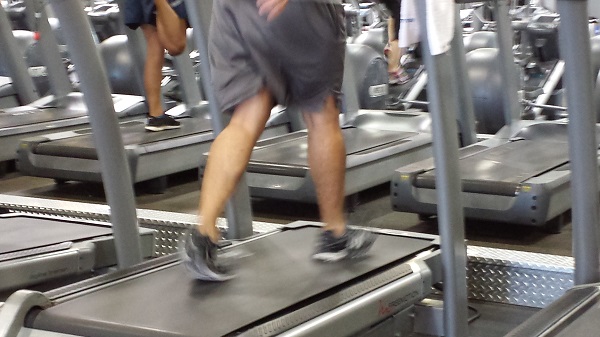 Random calves in action at the gym.

I’ve gotten so used to Callaghan vocalizing his observations that when he starts a sentence with “There was this guy in the gym,” I already know that the guy’s calves are the subject of the sentence. Also, I know that there’s a 95% chance that his remark is going to be unfavorable. Every once in a while, he’ll tell me about a guy he saw with well-proportioned calves. And there’s one guy in particular whose calves he greatly admires. I remember the first time he mentioned him.

“There was this guy in the gym,” he began. He’d just come home.

“…and he had skinny little calves,” I finished for him.

“No! His calves were beautiful!” he exclaimed, surprising me. He went on to effusively praise the beauty and magnificence of not only the guy’s calves, but of his entire physique.

After that, every time Callaghan saw this guy in the gym, I heard about it afterward.

Then Callaghan started working full-time and had to cut back significantly on his weight-lifting. He still does the Body Combat classes with me twice a week, but for now, he’s only lifting weights on Wednesday evenings (while I’m in boot camp class), and sometimes once on the weekend, usually on Sundays.

“Hahaha!!” I didn’t know why I thought that was hilarious, but for some reason, I did.

“His name is John. He introduced himself. I asked him, ‘Wow, what do you do to have beautiful calves like that?’”

That was exactly what Callaghan said. Imagine it in a French accent. Quite a pick-up line!

“That he has to thank his Mom. So I wanted to ask if his Mom had big calves, too,” he said, starting to laugh. “But I didn’t. Although I don’t think he would’ve minded.”

So we know that in this case of the Guy with Beautiful Calves, it’s genetics at play… and maybe it’s the beginning of a beautiful new gym bromance for Callaghan. The immediate effect of this whole thing, though, which I find kind of distracting, is that now I’m always checking out the lower legs on the males of our species. Yesterday, when I was talking to a guy at work, I found myself staring at his calves and thinking, he has nice calves! I laughed, but not out loud.

I’ve said this before: Callaghan’s English is excellent, and his French accent is so slight that I usually don’t even notice it. But every once in a while, he makes mistakes, and when his accent does reach my ears, it’s often to amusing effect. For instance, he says “fuckus” instead of “focus” (I think I’ve mentioned this in the past), and “bitch” instead of “beach.”

The examples I’m providing below all came directly out of Callaghan’s mouth verbatim, and in complete seriousness. I wrote them down after he said them. Yes, I’ve been keeping a file of the Callaghanisms. They’re priceless.

“My friend Christopher had a Ford Fuckus.”

“When we’re in Antibes, we can go see the bitch.”

And other words with the long ‘e’ vowel sound, such as…

“Let’s put the shits in the laundry.” (my personal favorite!)

I’ve started picking up on some patterns. Here are three, with examples:

1). Combining non-American word usage with a French accent results in dialogue like this:

“In high school, my nuts were great!”

“That spider is waving at us with its paws.”

The French call spider legs “les pattes,” which is also their word for “paws.”

I love this mistake. I wish we said “spider paws” in English.

3). Some words are easily confused:

In French, the word “le porc” refers to the meat of a pig, just like in English… but it can also be used as slang in reference to a person. Unlike in English.

After I wrote this post (which pretty much wrote itself, since I had all the Callaghanisms saved in a file), Callaghan decided that it was lacking a drawing of a French superhero, so he offered to whip one up for me:

And now, a bonus! I’ll sign off with a French film recommendation for your weekend… because I’ve been glancing up at this DVD while writing about humorous French-to-English accent and translation goofs, and the two things somehow go together. This film is a quirky black comedy, and I think it’s brilliant. It’s been my favorite French black comedy since I first saw it back in the 90’s.

Delicatessen was directed and co-written by Jean-Pierre Jeunet, who directed and co-wrote the more well-known film Amélie about a decade later. Both comedies are off-beat, but Delicatessen is quirky and dark where Amélie is whimsical and light. Both are quite funny in their odd little ways. Hey! These two complimentary Jean-Pierre Jeunet films would make for a great movie night double feature, n’est pas?