This little Sesame Street Bert doll moved into the apartment with us and sat in our linen closet up until yesterday.

I do remember when Callaghan found it at the store, soon after we got back to the States, but a lot has happened since then. Over time, it just became a part of the interior landscape of the closet… I’d see it without really seeing it. It was like ET amongst the stuffed animals. So when it reappeared in the room yesterday, I needed a reminder: it was for one of Callaghan’s French friends, Kitof, who’s in Texas this week with his wife and daughter. We met them downtown late yesterday afternoon for Congress Avenue Bridge bat-viewing and dinner at Hut’s Hamburgers. (Their vegan veggie burgers are fantastic, by the way!)

“So what’s the story behind Bert, again?” I asked Callaghan as I was sitting at my desk. He’d told me once, like three years ago, which is evidently past the expiration date on the part of my memory that stores that sort of information.

“The story behind Bert? Oh, well!” He heightened his voice with a grand flourish. “It’s because Kitof and I were fans of Ernie and Bert when we were kids, so we really like them… and it does happen from time to time that we do impersonations. So when I found this little Bert, I got it for Kitof’s birthday, since they’re coming here.”

“Cute! Wasn’t there also, like, an incident involving Ernie and Bert?” I had this hazy inkling that there were specifics I wasn’t remembering.

“Oh, that. Yeah.” His voice returned to normal. The most exciting part of his story had been told, so there was no need for dramatic emphasis on what he was going to say next. “One evening in Rome, we sat in the hotel watching videos of Ernie and Bert.”

It took me a second to process this.

“You guys were in Rome and that was how you spent the evening… watching Ernie and Bert?”

It was just Rome. Europeans!

“Uh… did it occur to you that it was weird?” I mean, ROME! I don’t know. Maybe it’s just me being American, but when someone begins a sentence with “One evening in Rome,” I kind of expect something other than Ernie and Bert to follow.

“No, it wasn’t weird. It was Ernie and Bert. We’re pretty good at impersonating them in French, too!”

Callaghan stood in the doorway and started to affect the muppets’ voices.

“Bart! J’ai soif!” he lisped in Ernie’s high-pitched voice. Then he dropped his voice to a nasally low and growled: “Hé Ernest! J’aimerais bien dormir!”

He turned to look at me. I wasn’t in my chair anymore. I was on the floor, laughing.

He ignored my hysterics and went to his computer, found the clip online and sent it to me. Thus, I can share it with you:

It’s in French, obviously, so I’ll summarize: it’s the episode in which Ernie and Bert (“Ernest and Bart” in French) are in bed, and Bert’s trying to sleep. You know the one. Ernie is thirsty, and he unwittingly keeps Bert awake as he talks to himself, coming up with silly ways to combat his thirst (including drinking imaginary mineral water). This concludes with Ernie finally getting up to get real water. But when he gets back into bed, he still can’t sleep… because by then, he’s hungry! And Bert’s like, WTF… I can’t win. 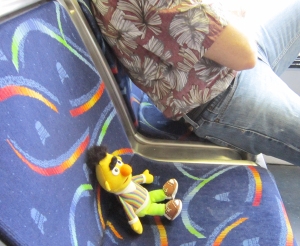 Bert sitting next to Callaghan on the 1M, going downtown. Keeping Austin Weird.

And here’s the sky full of bats! We actually missed their emergence from under the bridge… I took this picture while we were walking along the river. We’ll have to try catching them another time.