I’m no longer a Maiden virgin.

Last night, English heavy metal band Iron Maiden ROCKED AUSTIN when they came through on their “Maiden England 2013” tour, and I’m here to tell you that the show they put on was nothing short of SPECTACULAR. My first time with this band could not have been better. The concert was every bit the legendary Iron Maiden theatrical feast for the eyes and ears I’ve glimpsed in videos, but never thought I’d get to experience live.

They performed at the Austin360 Amphitheater at Circuit of the Americas, which is the home of the new Formula 1 racing track, so it’s Out There, compared to where we live. We rented a car for the occasion, facilitated by the fact that there’s an Avis conveniently located within easy walking distance from our apartment. As you might expect at a world-class racing track, the outdoor amphitheater was enormous… but it wasn’t big enough! We found ourselves in cozy company with hundreds of other screaming fans. The Austin360 amphitheater is the largest permanent stage in Central Texas with a total capacity of 14,000, and it was sold out for Iron Maiden.

We had lawn tickets, but we scored some high metal barstools where they were lined up on elevated concrete slabs behind a rail at the edge of the lawn. Positioned directly in front of the stage on the bottom-most slab, we enjoyed a fantastic view. It had rained earlier, so the night air was balmy and pleasant… the weather was beautiful for an outdoor concert at night. The ambience was amazing.

Going in, my expectations weren’t set too terribly high since the guys are older now… I wanted to give them that, to be fair. I was not expecting to be completely stunned by a powerful, high-octane performance that could only be described as phenomenal. This was the ultimate metal concert. The stage sets, the props (which included robotics and pyrotechnics), the sound and the musical performance, itself – the show’s theme seemed to be centered on Maiden’s 1988 Seventh Son of a Seventh Son album – combined to result in first-rate entertainment. It was all put together to staggering visual and auditory effect.

Iron Maiden gave us a show that was 110% heart and what had to be every ounce of their physical endurance. Throughout the hour and forty-five minute performance, they sprinted around and took flying leaps across the stage, constantly rearranging themselves from one end to the other. Bruce Dickinson appeared everywhere with swift agility, singing from both levels of the set and frequently wielding his mic like a harpoon. No way would I ever have guessed that these guys are in their mid-to-upper 50’s! Dickinson’s voice was spot-on impeccable, strong and clear, and his singing was as close to perfect as it gets. He might be aging, but his voice and lungs are clearly not.

Want to know what we paid for these tickets? A mere $40.00 each. That was all. (Black Sabbath was much more expensive.)

I took over a hundred photos, 16 of which I’m posting here. I regret to say that these are not good pictures. I’m not a photographer, and my camera has limited capabilities, so it was impossible to capture the dynamic stage presence, stamina, charisma and athleticism of these guys… but here they are, anyway – my attempt to give you an idea of what our four eyeballs raked in.

The entrance to the brand new Circuit Of The Americas, which hosts everything from Formula 1 races (a Renault F1 car sits there in front) to X Games to concerts.

The stage from afar… the opening set

“The Clairvoyant,” I think. 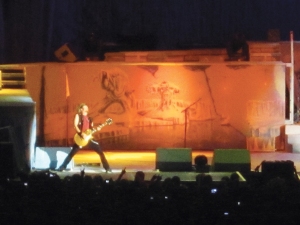 A long, vibrant and inspired “Phantom Of The Opera” took us on a lengthy musical journey. 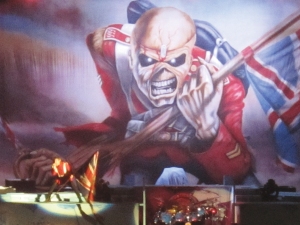 Bruce and his infamous flag, singing “The Trooper”

“Run to the Hills” 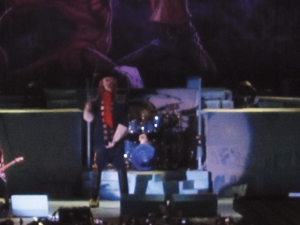 The crowd didn’t have room to run up and down the grass of Circuit of the Americas, but some thrashing went on while the 10-foot General Custer roamed the stage, threatening to cut Adrian Smith’s throat with his 4-foot sword.

Run to the Hills! 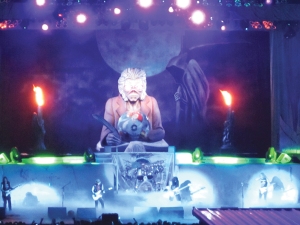 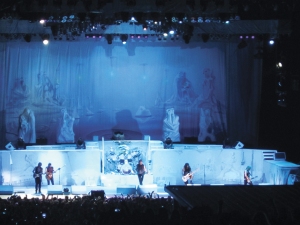 The “Can I Play With Madness” set. 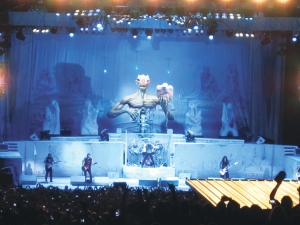 An animatronic “Eddie” oversees “Can I Play With Madness.”

(Many thanks to Callaghan for re-sizing the images for me while I wrote this text!)

The band’s energy was infectious, too. Afterward, we were so keyed up, we were famished. We ended up at the drive-through of the nearest Taco Bell at half-past midnight, where I ordered a black bean burrito with no cheese, and Callaghan ordered a 7-layer burrito.

And now, we still have this rental car on our hands, so we’re going to take advantage of it and go get heavy things in bulk, such as kitty litter. Also, we’re heading out to Round Rock tonight to meet up with some people Callaghan knows for cheap drinks. (Can’t argue with $3.00 beers for him and free club soda for me!)