On Tuesday morning, I was sitting outside on our balcony, one of my favorite places to be in the mornings, when an unusual vision materialized before my eyes: a pigeon in a tree. It was more than unusual, I realized as I watched the bird. It was almost unheard of, about as rare as finding me in a Costco. (Costco gives me panic attacks. I don’t know why.)

It’s probably safe to say that I’ve seen more pigeons “in the wild” than any other type of bird. I’ve known them to be street birds, pavement birds, train station, dirt path and riverside birds. I know them from parking lots, rooftops, sidewalks and gutters. They’re a common sight in city parks, at strip malls and on school grounds, and I’ve even seen them nesting on other people’s balconies.

Pigeons are special in that they’re the only birds I’ve seen everywhere except in trees, and that is one reason why I like them. They are among us. Come to think of it, I don’t even really regard them as birds. They’re pigeons.

When I realized that the bird in the tree in front of me was a pigeon, I had to step inside and grab my camera. You know me.

It was mostly just surprising to see how a pigeon can shrug off his common cloak to become an utterly exotic bird when he’s in a tree.

For one thing, his usual stances and postures are replaced by those typical of any other bird in a tree… a bird delicately positioned on a limb (in this case, a frond, as the tree is a Phoenix date palm) instead of standing solid on the ground. I think that’s another reason why it took a minute to realize that he was a pigeon… he held himself differently, perching, balancing, being… un-pigeon-like. Rather than doing the urban pigeon-walk, he hopped lightly and fluttered, and because his movements were different, his colors flashed in the sunlight differently, too. I’ve always found pigeons to be beautiful, but now I could appreciate his beauty in a whole new way.

So, pictures. When I showed these to Callaghan, he laughed.

“These are four pictures of the same thing!”

“No they aren’t!” I protested, laughing. “Look closely – his posture is different in every one.”

Callaghan often makes fun of me for “taking 200 pictures of the exact same thing” every time I whip out my camera. It’s true, I do tend to take a zillion shots of my subject, whatever it is. I like to capture those minute differences in angle and lighting. Also, I know that out of the many, I’m going to get at least one really good one.

Here are my four favorites of this guy: 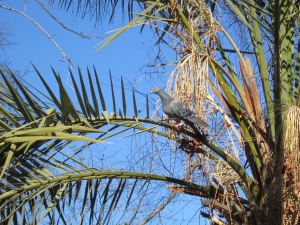 It was the emerald sheen on his outstretched neck that caught my eye first. 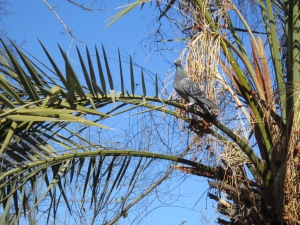 High in the sky, that pigeon. Not on the ground.