Last spring, I wrote about how the City of Nice chose a Frenchman’s drawing featuring a practically naked, obese woman to represent the United States in a parade float for their annual world-famous Carnaval celebration. The drawing was, shall we say, handily fleshed out with stereotypes of cavalier gluttony and general tackiness in a rather simple and tasteless mockery. This is an image that matches a popular French conception of Americans. Just to make sure there was no mistaking the float’s nationality, the artist put a Statue of Liberty crown on the woman’s head, a bottle of Coke in the hand of her upraised torch-bearing arm, and stood her atop a gigantic cheeseburger. 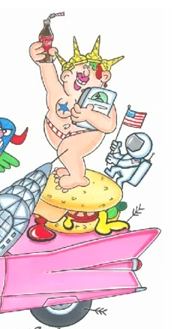 The fat woman on a cheeseburger pedestal towers over the first astronaut to land on the moon. 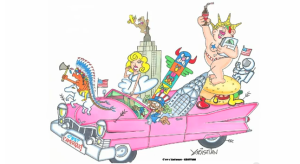 Callaghan, who was raised in Nice and carries dual (French-American) citizenship, was also taken aback by the selection of that drawing.

Now, a year later, the City of Nice seems to be having some sort of identity crisis, the main symptom being its 2014 “Greetings to Nice” poster campaign featuring a variety of images of its inhabitants… a self-promotional campaign that blew up in the faces of its creators when an article came out busting them for using… wait for it… photos of Americans.

So much for municipal pride.

What makes this especially ridiculous is that the City of Nice made sure to announce that the folks in the images were “All Nice!” because last year it generated controversy when it used “different” (i.e. non-French) faces to represent itself in a similar campaign.

Feel free to check out the article here. (You can probably gather the general gist of it even if you can’t read French.)

Understandably, the phony campaign has outraged many people of Nice. When the ad copy claims that the creators specifically and exclusively “sought out people of Nice” for their poster images, it must be disheartening to realize that the images were actually harvested from the French version (copied and pasted from the original with a French search engine) of an American photo image bank (Thinkstock), and that none of the models used are even French, much less inhabitants of Nice.

On my part, the deception is disturbing not as a misled person of Nice, but as an American who witnessed the City of Nice’ selection of that questionable drawing for last year’s parade. My French isn’t perfect, but hypocrisy does not easily get lost in translation. In this case, it’s coming through loud and clear.

It was an irate Callaghan who brought the article to my attention.

“The City of Nice,” he grumbled as he hung up the phone with one of his friends on the French Rivera, “created a ‘Happy New Year’ greeting card for Nice using images of people from Nice, except they’re not, because the pictures were taken off an American photo bank website! It’s bullshit.”

Callaghan has often said to me that the French regard Americans with disdain and mock them because they secretly want to be them. I never knew what to think of that theory, but now the actions of the City of Nice are giving credence to it.

Americans. Make fun of them in public. Pretend to be them in private.

I’ll tell you what… if I was working on a promotional campaign for the City of Nice, I’d cover the posters with photos of pan bagnat (the traditional Niçoise tuna sandwich) and call it a day. It’s the best tuna sandwich in the world. That’s something to be proud of. 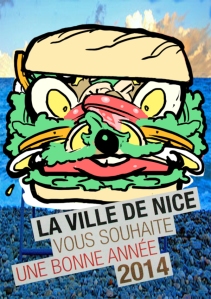 Happy New Year from the City of Nice!

(The City of Nice Wishes You a Happy New Year 2014 original drawing by Callaghan. Text taken from the article.)

This is a failed picture of a cicada that I tried to take tonight. He was vibrating and the wind was blowing and I just couldn't get a pic of him! His song was beautiful. In other words, the length of my new blog post is up with my bio. 🖤 #nofilter