When Callaghan finally – yay! – got his Arizona driver’s license a couple of weeks ago, the first thing I did was pluck it out of his hand to examine it.  I don’t know… is it just me, or is there a universal, oddly voyeuristic thrill attached to the act of peeking at someone’s license, regardless of how well you already know the person?

“Philippe-Alexandre Louis,” I said, reading his first and middle names as printed on the license. “Louis was your grandfather, right?”

“Yes. My Mom’s father. I wasn’t close to him, though. My middle name should be ‘Roger’ after my other Grandfather.”

Roger is his paternal, remaining Grandfather, the one I know.

“Well one thing’s for sure… your entire name is completely, profoundly French with ‘Louis’ stuck in the middle of it,” I said.

“…whereas ‘Roger’ is a common name here in the States. The average American would look at your name and pronounce it ‘Roger,’ not ‘Roh-zhay’.” (Rhymes with “Tar-zhay,” my favorite store.)

“‘Roger’ is also a common verb in English. Like on the radio. Roger this. Roger that. But everyone knows that ‘Louis’ is FRENCH, and we pronounce it that way. LOUIE. Rhymes with ‘chewy’!”

Callaghan looked sideways at me.

“We had this commercial in the ‘70’s,” I explained, “for Charleston Chew. Remember that vintage candy bar?”

“I used to love their commercials! One of them had three French kings, all Louis, of course. It was brilliant. It was my favorite commercial at the time…”

I started describing it.

“In the first frame of the commercial, a guy dressed up as King Louis – outrageous wig and all – sits facing us with a Charleston Chew candy bar in his hand. He looks at the camera and makes a pompous declaration, saying something like, “‘Charleston Chew is chewy. Louis?’ and he passes the candy bar to his left, out of the frame.

In the next frame, scene two, another guy dressed as another King Louis takes the candy bar and holds it up as he says the same thing in the same exaggerated, overbearing way: ‘Charleston Chew is chewy. Louis?’ and then he passes the candy bar to his left.”

“I see where this is going,” said Callaghan. France had a million Kings called “Louis.” Well, maybe more like twenty.

“But no! There’s a twist,” I said. “In the third frame, the third King Louis takes the candy bar and says, ‘Charleston Chew is chewy… but not too chewy, Louis.’ And there’s a twinkly innuendo of condescending humor at the end of his voice, so he’s almost, like, making fun of the first two Kings. Haha!” I laughed.

Callaghan stared at me.

“I guess you had to be there to see it,” I admitted. “I’ll find it online. Anyway, thanks to that commercial, I knew about King Louis of France long before I learned any French history in school, and I always knew that ‘Louis’ is a French name. I somehow never realized that ‘Roger’ was a French name until I met you.”

Later, to my great consternation, I could not, in fact, find the commercial online. This is the first time YouTube has failed me!

If anyone out there can find that Charleston Chew commercial with King Louis, please do pass it over to me. To your left. Haha. 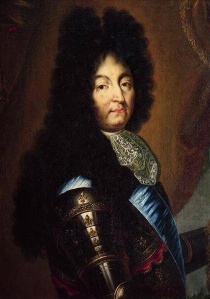