In the last year, Callaghan’s drawings have taken a turn for the dimensional. Using ink on a particular type of plastic sheeting as his medium, he’ll do a drawing in parts, cutting everything out, applying color, and then positioning the parts like puzzle pieces, overlapping them in some places and gluing it all together. He gives the resulting “assemblage drawing” a kind of 3-D effect by stacking layers of small pieces of the plastic and strategically placing them beneath various components of the picture, creating differing heights throughout.

He did a brilliant portrait of my parents using this method, as well as my Valentine’s Day red roses and a stunning tribute to French author Antoine de Saint-Exupéry, among others.

But allow me to arrive at the point, lest you think this post is nothing more than a shameless plug for my husband’s art!

Callaghan recently completed and submitted his designs for the 2015 Carnaval of Nice float competition, an annual project of considerable effort and magnitude that takes place in the spring of each year. As I’ve mentioned here before, the Carnaval team creates its parade floats based on the themed designs of the winning drawings. This year, Callaghan employed his new assemblage-drawing method, which meant that when he called me into his studio to check out his progress, I often only saw parts of the completed pictures.

He started with the King (there’s always a King and Queen of Carnaval leading the float parade). He dressed the King as Elvis, since the theme of Carnaval 2015 is “La Musique.”

He drew a few pieces of the King, cut them out, and then called me in to show me his work.

“Oh, cool… Elvis is coming along nicely!” I commented. Then my vision focused on the pieces of the unfinished Elvis and my brain made a connection (as it does sometimes, eventually). “Wait… is that his package?” I asked.

Of course it’s normal. It’s just that, for one thing, I was surprised because Callaghan doesn’t usually draw male genitalia. Also, when you see a floating leg sans torso, an exaggerated crotch bulge acquires an identity of its own. “Elvis the Pelvis,” I guess, right?

A few weeks later, Callaghan started to work on the L’aigle Niçois (“Eagle of Nice”), another important standing character in the parade, since the Eagle is the symbol/mascot of the city of Nice. Again, he called me in to view his progress.

“No way,” I said, cracking up. He’d drawn the Eagle’s lower half like this: 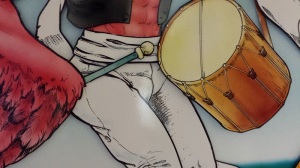 “That eagle… it has an actual camel hump! Hahaha!”

I could see the point where Elvis was concerned, but the eagle? Quite a package, indeed. I guess that’s one way to wrap up a big project!