The other night, Callaghan and I were sitting next to each other on the loveseat when he picked up my hand and lifted it to his lips.

“Mmm, I love your skin and your temperature,” he said, kissing my wrist.

“My temperature? Haha! That’s a new one!”

He didn’t start laughing with me, and that threw me off. He was unusually mild, oddly emotionless with his statement. He kissed my forearm up and down, and I was reminded of a cartoon character – Foghorn Leghorn, maybe? – eating corn on the cob, like a typewriter. Sexy! I stifled a giggle.

“Mmm. Good temperature. I’ll keep you,” he murmured dramatically. His words and actions were comical, but his demeanor was serious.

Well that was strange, I thought, looking after his form as it walked off and turned the corner into the hallway.

A little while later, he passed by me where I was still sitting on the loveseat. He paused, picked up my foot, and kissed it.

“Yes. You’re the right temperature,” he said, releasing my foot and continuing on his way to the kitchen. His tone was definite, as if confirming to himself the veracity of his earlier assessment. His tone almost had an air of scientific assessment.

At that point, I had to wonder:

–Not only is Callaghan not into feet, but he just barely tolerates them. Feet are not one of his erogenous zones.

—Ergo, singling out my foot for a kiss is something that would be classified as a distinctly un-Callaghan-like act.

My mind immediately went to:

—OMG he’s been abducted by aliens.

–Or, he IS an alien… an alien from a planet where the standard of beauty is temperature-based. The aliens gauge a human’s temperature by pressing their lips to his/her extremities, thus measuring attractiveness.

–Who or what is this person-like thing, and what did it do with my husband? Why is it assessing my temperature?

–WHAT IS IT PLANNING TO DO WITH ME?

One thing’s for sure: if it was just him being in a weird mood, he certainly does get points for originality. Of the various sorts of compliments I’ve received in my life, my temperature hasn’t been one of them. 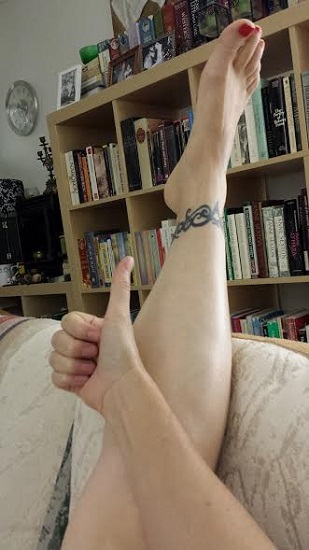 I passed the alien magnet test with the allure of the incomparable temperature of my extremities.

This is how I must look to an alien, what with my temperature all hanging out everywhere, you know.

HEY! I just thought of something… in the film Edge of Tomorrow, the aliens were in Paris, FRANCE. **SPOILER ALERT** The master alien was found hiding beneath the Louvre, which happens to be Callaghan’s favorite place on earth. Now it’s all starting to make sense….

2 thoughts on “My Partner is Weirder than Yours.”