You know how it is when you search for something online, and within days, that very thing pops up in your Facebook news feed while you’re scrolling through it? I found it disconcerting when it first started happening, but now, I’m accustomed to it. I’ve gotten used to the internet spying on my web-browsing habits and keeping track of my site visits, though I’m not less annoyed by it.

But I have some reassuring news to share: the internet is not as all-knowing as it appears to be, and it’s nowhere near as adept at learning about you as you might think! There are grave flaws in its insidious little system, bugs in the mechanism behind the personal-habit espionage that goes on every time we enter the ether that is the internet. I know this because I visit at least one Arizona State University web page per day, yet earlier this week, an ad for Alabama State University gifts inserted itself into my news feed and passed before my eyeballs as I scrolled through. Why? Because ASU. 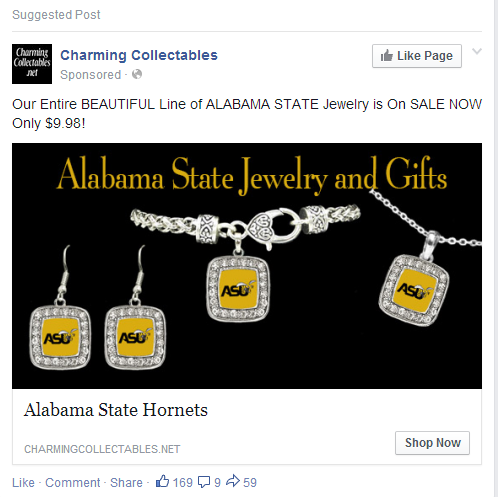 Not my ASU! My alma mater is Arizona State, not Alabama State.

YOU’RE DOING IT WRONG, robotic internet spies. I have never searched for Alabama State anything! Ha!

This is not to diss Alabama, mind you. I’m just saying that there are big differences. For instance, in Arizona, if you accidentally dump a full container of water on yourself in the car during the summer, it’s no big deal because after you exit your car and walk across the parking lot to the store, your shirt will be completely dry. The hot, dry air works like a gigantic clothes dryer when you cut through it. In Alabama, on the other hand, it’s humid… so if you dump water on yourself in the car, you’re likely to be even wetter by the time you get to the store.

Somehow, I’m reminded of Sheriff Joe, our sheriff who decided against running for governor. I think his decision was a sound one, and not just because “Governor Joe” doesn’t have the same ring to it as “Sheriff Joe” AT ALL. I have suspected for a while now that Sheriff Joe, aka “America’s Toughest Sheriff,” has been secretly working out a zombie apocalypse plan for Arizona. How else would you explain the mysterious statement he made when he announced that he wasn’t running for governor:

“I cannot in good conscience leave the sheriff’s office now, since that would be necessary if I declare a candidacy for governor,” Arpaio said in a press release. “Currently, I have several sensitive investigations in progress and am facing many challenges in my office. Because of this, I will not desert the people of Maricopa County who have elected me six times. Further, I cannot desert my dedicated employees.” (source: The Entire Internet)

Obviously he’s talking about the zombie apocalypse! There are zombies all over his statement, and it’s true… if there’s no Sheriff Joe, who will lead us when it hits?

I just keyed “sheriff joe zombie apocalypse” into my search engine. I can’t wait to see what ads will show up on my FB feed now.