Just when you thought it was safe to approach your computer (I know, you thought I was going to say “to go back in the water,” since this is shark week)… here’s another cat picture. But there’s a twist to this one:

That would be the Ronnie James, aka “the Wrah-Wrah.”

Here’s how you’d normally see him: 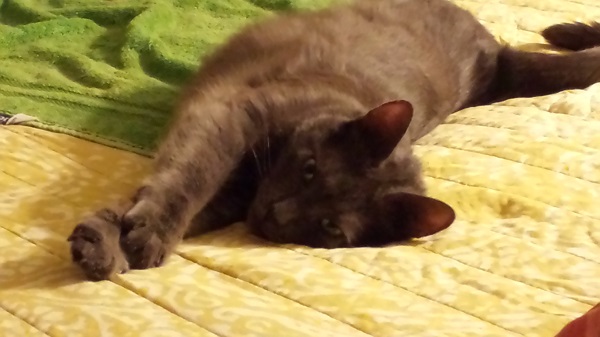 Hi. You can call me the Wrah-Wrah.

Since the weekend, I’ve been kind of disheartened and distracted thinking about the Wrah-Wrah. We took him to the vet on Saturday, and he was diagnosed with asthma.

This is a controllable situation, but… but. I just feel like a bad kitty mommy.

He’s been uncomfortable for months. With his chronic cough and breathing quirks, we should have taken him in sooner. All this time, we could see and hear him breathing too quickly, too erratically. We could hear him wheezing now and then. We witnessed many of his coughing bouts, always in that same, telltale position, never hacking anything up, but acting as if he was trying to. Then I think back on that scary episode that woke us up one night not too long ago, and I think, why didn’t we take him to the vet immediately after that? Obviously, something wasn’t right.

We did schedule him to see the vet at some point, but at the last minute, something came up, and then he seemed to be okay again, so we cancelled it. It’s allergies, we thought. It’s a hairball, and he’s trying to eject it, we thought. It’s a mild upper respiratory thing. It’ll pass.

That was last month. Finally, after sitting with him through several more weird coughing episodes, we made another appointment. By the time it occurred to us that he really needed to be examined, the earliest appointment available (with the doctor that I wanted, though all the doctors at our clinic are excellent) was for 4:30pm last Saturday. We were heading out to Rage in the Cage, and we were almost late because we were at the vet with the Wrah-Wrah, waiting for his chest x-rays to come back. (Don’t worry… we did stop at home after the vet. We didn’t bring Ronnie James with us to Rage in the Cage, haha.)

When the vet went over the x-rays with us in the examining room, she showed us a frontal view of his chest and pointed at the ghostly white stringy-looking things in his lung area. This bolstered her suspicion of asthma, and the next day, the analyzing radiologist confirmed it. When the vet gave us the images on the disc, we weren’t able to get back to that first view, but you can still kind of see it here:

I CAN HAZ ASTHMA.

Apparently, only about 1% of kitties have asthma.

We discussed the available treatment plan options and decided to start with oral medication. It was a process of elimination decision: Ronnie James needs steroid treatment (Prednisone), and the injection option carries the risk of leading to diabetes later in life. There’s also a kitty inhaler we can use in the event of an asthma attack.

We get his Prednisone from Diamondback Drugs, a wonderful veterinary “compounding pharmacy” that prepares medications in a variety of ways. We asked them to make a flavorless liquid Prednisone formula (the liquid preparations are either tasteless or flavored) so the Wrah-Wrah won’t have to go through the daily ordeal of taking a pill.

Also toward the end of reducing his stress as much as possible, we bought a Feliway diffuser, which is like room deodorizer, except humans can’t smell it. Feliway is basically a synthetic version of the feline facial pheromone, and it works like aromatherapy for cats. We plugged it into an outlet in the bedroom, where he spends a lot of time. It actually works really well! The Wrah-Wrah’s nervous over-grooming habit has decreased dramatically since we plugged in the Feliway.

We’re also going to get a humidifier for the bedroom, since dry air can make asthma worse.

Yes… Ronnie James has a condition that’s exacerbated by dry air, and I brought him to the desert. =(

We have an asthmatic Wrah-Wrah, a special-needs Wrah-Wrah, and now we need to learn how to give CPR to kitties (which all kitty parents should probably know, anyway, come to think of it).

So that’s the latest in Ronnie James news, folks. Ronnie James, rockin’ on like his namesake, Ronnie James Dio. He continues to love snuggling up to any headphones he finds lying around. 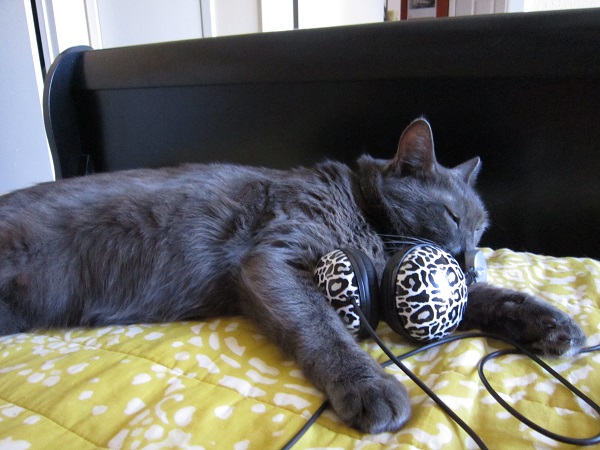