In my “July Favorites” post (that seems all too recent), I mentioned an on-going adventure that consumed the month. It actually started on the last weekend of June, and the situation changed so frequently from the very start that we just decided not to mention it until the end. That brings us to today. We’re moving!

No need for alarm. We’re only moving down the street this time. Heheh.

We loved our apartment, truly. It was peaceful, and we appreciated the unfettered feeling of renting rather than owning our living space. Having lived in many apartments and owned properties in the past, I’ve always felt more comfortable as a renter than as a homeowner. But over the last few months, several compelling reasons to reconsider welled up.

One, we needed more space. Callaghan used the larger of the apartment’s two bedrooms for his studio, but still, the room overflowed with the accoutrements of his multifaceted craft… plus, we also had to use that space for storage, making it even more cramped.

Two, we weren’t properly set up to host guests, and when your guests mostly come from Europe for longer stays, that’s a big deal. Two of our visitors from France slept on an air mattress we put in the middle of said cramped studio room at night, which wasn’t very comfortable for anyone, and the third – a couple and their daughter – stayed in a hotel (yet somehow, they were the ones who accidentally saw me naked).

Three, I didn’t have an office, and I had been sorely feeling that lack of a dedicated writing space. Obviously, I can survive without one, but I just reached some kind of limit after several years of officelessness. I needed that room of one’s own, to echo Virginia Woolf. Since 2010, I’ve been carving out little office spaces for myself here and there by placing a small desk in the corner of a crowded room, usually the bedroom. I longed for an office again.

Four, nearing the end of our apartment lease, we discovered that our rent would be raised upon re-signing. We had to make a decision.

All of this led to the final thing (and the catalyst for everything) that happened: I was half-joking around one night at the end of June when I filled out a form online. Next thing we knew, we were swept into the eye of the house-hunting storm that defined the months of July and August.

It’s a good time to buy, and looking for a house was fun. The twists and turns of our search initially took us out of our preferred area, but eventually, a house right down the street from our apartment appeared on the market. It happened at precisely the right time, and it happened that we both loved it at first sight, and it happened that our inspector found it to be in excellent condition (unlike the previous house we’d almost committed to buying).

Built in 1958, the house is your standard four-bedroom/two-bathroom ranch-style abode so common here out west. It has everything we need, and nothing we don’t. It was critical to us that we didn’t get more house than we absolutely needed. Most importantly, its location is ideal. The appraiser recorded the house as being situated “1.5 miles from the center of the ASU campus, in a highly sought after area of old town Tempe,” and that’s exactly where we wanted to be. 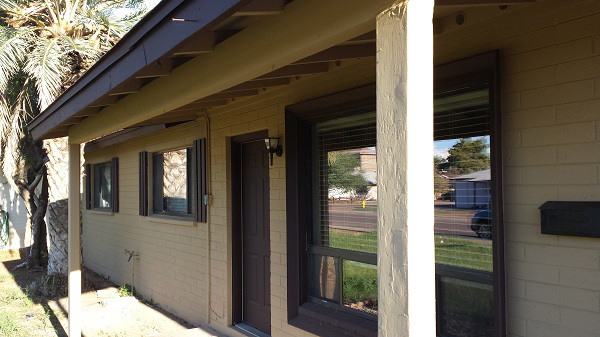 Little Ranch House in the Desert

The house-buying process was almost complete when the universe, in a flamboyant move to confirm our decision – just in case we were having doubts! – hurtled a spectacular monsoon into our apartment neighborhood, knocking out our power, taking down trees and permanently altering the botanical composition in front of our balcony. It’s still lush and green out there, but suddenly, the tree house effect that had so captivated us in the apartment was gone! We were sad for the destruction of the trees on our street, but it was a magnificent storm. 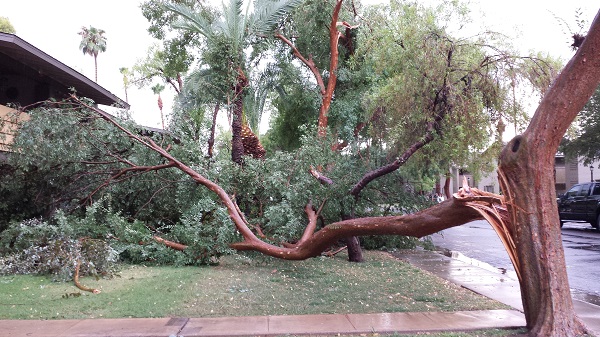 Our apartment is the in the upper left….

The storm made quite an impact on our street! 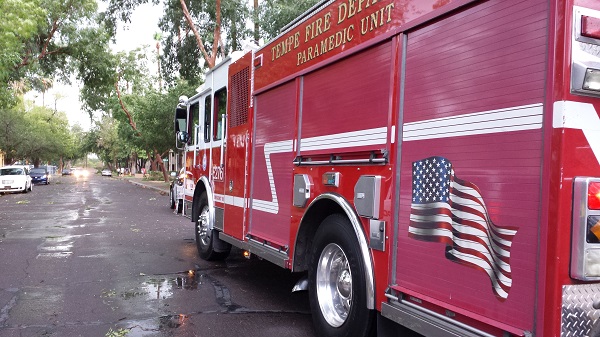 I don’t think anyone was hurt, though. 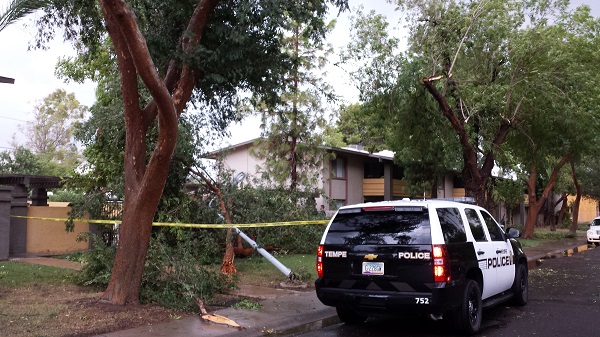 It was the one good storm of the season.

We got the keys last night, and this weekend will be all about the move. It is, in fact, happening, and I’ll be so glad when it’s over and we’re unpacked and organized! I’ve been fantasizing about an organized life with a place for everything for years, it seems. It’s amazing. I’ll have an office, and Callaghan will have a studio that’s just a studio, and visitors will have a guest bedroom and bathroom, and Ronnie James and Nounours will have lots of running-around space, and there will be no shortage of storage space, either.

So, that’s the story behind this latest move into this latest dwelling, which we see as being a Very Long-Term Situation. It’s sweet. It’s a sweet little house, and we’re grateful to have gotten it. We got lucky, is what we got.

4 thoughts on “Little Ranch House in the Desert”