I’ve been more scarce than usual online these last two weeks, and I haven’t been sleeping as much as I should. This has less to do with the rooster named Moe next door and more to do with the fact that I’m semi-obsessed with unpacking the whole house within a ridiculous (self-imposed) time-frame.

One consequence of not getting enough sleep is a tendency to see things, as in, to look at something and see something else. I’ve been taking quite a few second and third looks lately, checking to see if what I’m seeing is really what I’m seeing.

The other day, I stepped outside and saw this:

Callaghan fiddling with the backyard sprinklers.

After I realized that Callaghan was trying to troubleshoot a broken sprinkler, I went to grab my phone. He was so intent on figuring out the problem that he wasn’t aware that I was taking pictures as he adjusted the stream of water. He thought I was just being weird, laughing for no reason. (I can’t imagine why he’d think that.) 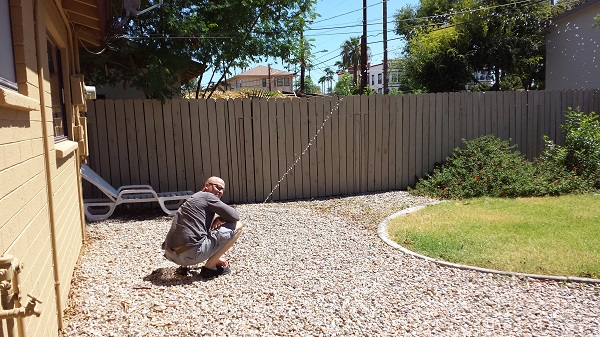 He didn’t get why I was laughing…

Then there was the time I spotted a questionable box in a jewelry store, tucked away behind the counter. This was on Friday afternoon, when I finally – finally! – had an opportunity to take my watch in to get the battery replaced. (I cannot tell you what an immense relief it was to address this issue. My watch had been dead for almost two weeks, and it was maddening to reflexively glance at my wrist fifty times a day only to see “5:20” every time.)

So I’m standing there and my eyes wander behind the counter, and this is what I see on the floor behind the sales representative:

Alarming discovery in the jewelry store.

…a box containing a puppy in 14 pieces, “country of origin CHINA.”

This trio of characters is the first thing I see when I walk into work every day.

This scene changes every day, sometimes several times a day. I never know what I’m going to see when I walk in.

Have a great Tuesday, All!