I had an idea, and then I didn’t. Then I thought I would wake up early this morning with that same idea or some other idea circulating through my brain, but alas, it didn’t happen. The waking-up early part almost-but-not-quite happened, but the idea part didn’t, and that, unfortunately, was the critical part. I’m idea-less. It’s been a long week, and ALL THE IDEAS have left the building. I got nothing.

Or so I thought. One thing I did want to mention is that Ronnie James’ girlfriend has returned, to our relief. You see, she’d disappeared sometime early Halloween week, and you know that long-rampant (albeit probably untrue) rumor about how so-called devil-worshippers swoop through the neighborhoods around Halloween and abscond with outdoor cats – particularly the black ones – to use for “rituals”?  So I’d been a bit nervous for her, she who roams the ‘hood with no fear. By Wednesday last week, Ronnie James (le pauvre petit Wrah-Wrah! as we like to call him) could be observed at any given time draped forlornly over the table in front of the window, his dragony yellow eyes half-closed and scanning the street horizon in search of his little lady. And finally, two days ago, she made her first post-Halloween appearance.

She returned just as spry and adorable as usual. We wondered whether her Mommy or Daddy (we believe that she’s someone’s kid, and not just a stray) deliberately kept her in during Halloween week, a thought that warms my heart. Even if those black cat rumors aren’t true, there’s a lot to be said for peace of mind. I mean, anything could have happened. She could have been hit by a car or something.

So that’s the report from the neighborhood, folks. All is well.

For a flourish of a finish today, you get a couple of kitty grams:

What? I’m the Wrah-Wrah. 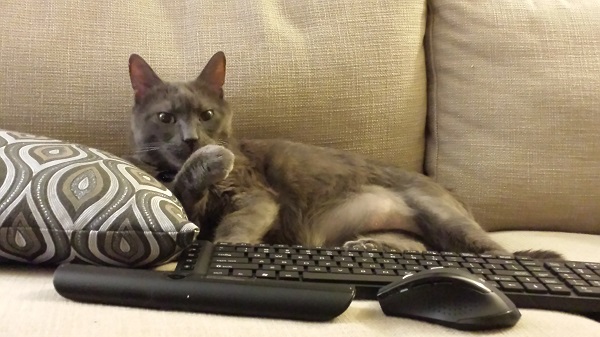