No one likes going through security at the airport. I don’t know anyone who’s travelled in the last 14 years who doesn’t have a nightmare airport security story to share, or at least a general gripe about the whole process.

Up until our recent trip to France, I’d been indifferent (in that resigned kind of way) to the hassles of airport security, relatively speaking. But now that I’ve had my own airport security, um, experience coming back to the States last month? I’m sharing it here. It’s a pretty ridiculous story that I think you’ll appreciate.

This happened at Charles de Gaulle airport in Paris when we were coming back to the States in March. We were flying with United Airlines.

At first, everything was normal going through security. I walked through the screening doorframe thing with no issue, went to the conveyor belt to collect my handbag and my laptop with its case, and put the laptop back in the case. Then I waited for my carry-on to come through on the belt.

And I realized that my carry-on, a small suitcase, had been set aside for a more in-depth inspection. I was told to wait at the far end of the belt. There was a dude there who’d also been told that he needed further inspection, for whatever reason, so I took a place behind him to wait.

It’s very rare that I get stopped at any point in the airport security check-through process, so this was mildly annoying, but I said nothing as I stood there. I kind of zoned out as my mind wandered to a hundred places during the wait, but at some point, it registered in my consciousness that there was a fiasco happening with the dude waiting in front of me. It seemed that he was getting quite the robust security once-over all of a sudden.

I glanced down the conveyor belt to my left. My carry-on was still sitting there, untouched.

The minutes continued to pass, and they got longer and longer. The dude in front of me was now being questioned by two or three security people. Since all the security personnel at our end of the belt were preoccupied with this one dude, my carry-on was being ignored. It was getting late… our flight would start boarding soon! Our gate was within view, and I could see that people were standing and lining up. I looked over at Callaghan, who was waiting on the periphery of the area, and we exchanged eye rolls.

The fuss going on with the dude in front of me continued and intensified, and then, in the middle of it, one of the security guys involved noticed me standing there and demanded that I hand him my laptop.

I think I did one of those things where I quickly looked to my left and right, saw no one, pointed at myself, and said, me? With just the expression on my face. I was confused. My laptop and its case had both been cleared in the digital screening process on the conveyor belt, along with my handbag. That’s why I was standing there holding these things; you’re not allowed to collect and hold things that are suspect!

It was almost like Security Guy asked for my laptop on a whim, as in, I’m on a roll here with this other dude, so hey! Why not check out her laptop, too, because you NEVER KNOW, she might have slipped something illegal into her laptop case AFTER it successfully went through on the belt!

I tried not to let my incredulity overwhelm me, but I’ll tell you what, it was tough. At least I didn’t let it show. I played along with a cheerful outward attitude and handed over my laptop without complaining.

Meanwhile, across the way, our flight had started boarding. In fact, they looked to be more than half-way through. Callaghan and I were in the second boarding group, so it was well past our boarding time. We’d been at security for almost an hour!

Security Guy removed my laptop from its case and made a big to-do inspecting it and the case.

Across the way at our gate, the last group was boarding; we were now in danger of missing our flight.

Security Guy returned my laptop to me and told me to hold out my hands, first palms down, then palms up, so he could screen them slowly and carefully with his little hand-held scanner thing with the little red light, just like they’d done with the dude in front of me. Really?! I thought. Why don’t you go inspect my carry-on, since that’s why I’m standing here! It was seriously like he was just thinking of things to do, just for the fun of it. I couldn’t believe it. My carry-on being held for inspection warranted none of this; my person and my laptop and its case and my handbag had all successfully cleared security already.

Finally, I was handed my carry-on. I grabbed it and ran with Callaghan to the gate, where some words were exchanged with the airline lady who was collecting tickets. She actually lectured us sternly and said that we were “too late” and couldn’t board the plane! Callaghan argued with her briefly (It’s not our fault! We were held at security for an hour!), and she relented. Merci, Madam. We didn’t have her blessings, but we were granted passage onto the plane.

It was surreal; it was like everyone at United Airlines at Charles de Gaulle that day woke up on a pumped-up power trip.

Perhaps the most ridiculous thing about all of this was the fact that my boarding pass designated me as a “Pre-TSA” passenger. Callaghan was “Pre-TSA,” too. This designation is a privilege meant to expedite a passenger’s security process, allowing for a less involved process! Instead of that, I had the opposite experience. Something was very wrong with the whole picture. 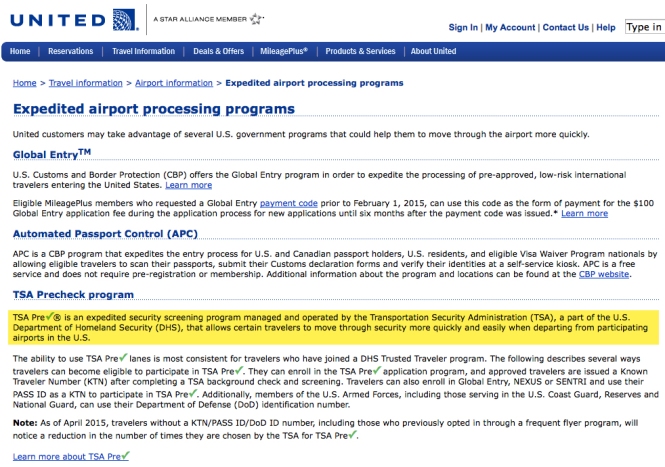 Now, would you like to know what happened next? Yes. Yes, you would, because you know I’m not writing all this just to complain. Here’s the punchline:

After ALL of that unmerited, borderline-harassment rigmarole that got us scolded for tardiness by Airplane Lady at the gate and very nearly caused us to miss our flight, I finally boarded the airplane…

WITH A KNIFE IN MY HANDBAG.

Because I, myself, had forgotten that it was in there, and no one found it.

Yes, you read that right. After all of that, no one found the knife in my bag!

I couldn’t believe it when I realized it.

Just like my laptop and its case, my handbag had sailed past the cameras on the belt with no problem at all. It wasn’t stopped, held, re-checked, manually inspected, or anything. It passed right on through, and I collected it as soon as I stepped through the screening doorframe. The whole time Security Guy was making a big deal looking at my laptop and my carry-on was being scrutinized for I don’t know what, I was standing there with a knife inside the bag that was on my arm, and then I boarded the airplane with it. 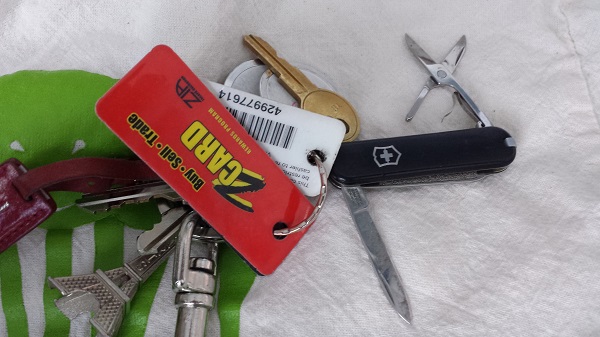 My keys, complete with my Victorionox Swiss Army knife (which includes pointed-tip scissors).

Do I even need to say that this constitutes a spot on the Top Ten most absurd airport security FAIL stories you’ve ever heard?

It’s a small knife, a pocket knife on my keychain, but it’s still a knife. I checked United Airlines’ web site; United doesn’t allow knives of ANY blade length. The rules on their web site are clear: 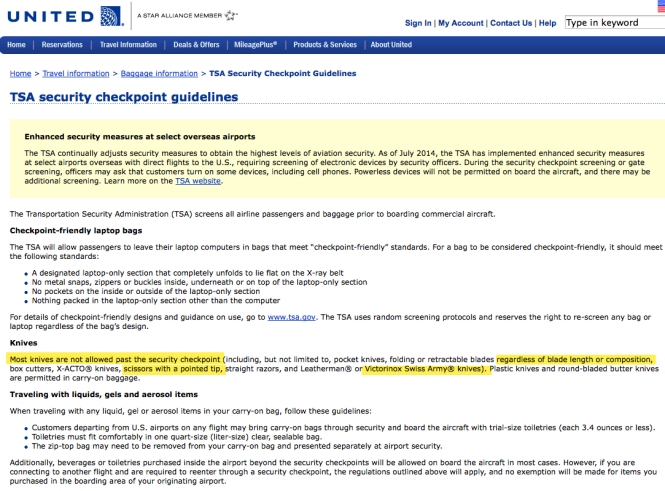 The knife in my bag is a Swiss Army Victorinox pocket knife, exactly as stated on the not-allowed list, complete with “scissors with a pointed tip.” I should not have been allowed on that plane with this knife. The security people should have found the knife, and they should have confiscated it, after which I would have come home and gamely purchased what would have been my third or fourth such knife. (Yes, I’ve had several of these knives confiscated at airports over the years, and I never blame anyone but myself. I always have a knife on me, and I’m just really bad at remembering that there’s a blade on my keychain when I go to the airport. Trivia: I always replace the confiscated knife with the exact same knife, and always in black.)

Also, while I’m at it, I should say that I had a tube of hand lotion that was neither in a 3-oz (or smaller) container, nor removed from my bag and sent through in a clear plastic Ziploc bag. Airport security DOUBLE FAIL.

I’m not telling this story to bitch about being held for an hour at security. I’m telling it because I was held for an hour at security for the wrong reasons and then let on the plane armed with a knife, and everyone should be aware of this. Don’t trust your fellow airplane passengers just because they got past security and got on the plane. If I was someone else, it might have ended badly for a lot of people. Knowing that all of this happened, how much can we trust the security measures taken at the airport, especially on trans-Atlantic flights? We can’t. We can’t really trust them. We have to “stay alert to stay alive,” as they teach you in the military. And on my part, I’m going to try to remember to remove my knife from my keychain before I travel from now on.

On that note… Happy Friday, everyone!