Why good morning, friends. As of three days ago, I have a new tattoo, and I wanted to share it with you. It’s a small one, but of all my tattoos, this one is the dearest to my heart.

Right after Ronnie James died, I suddenly, desperately wanted to apply ink to his little paw pads and press his paw onto paper. It wasn’t a thought I’d taken the time to formulate beforehand. As much as I’d tried to prepare myself, his passing was harder for me than I’d imagined it could be, and in the aftermath, I wanted something of him that would stay with me forever.

Since it was a last-minute decision, we were ill-prepared. The inks in Callaghan’s studio yielded fuzzy prints, but we thought we could work with them. They were certainly better than nothing. My idea was to have his paw print indelibly inked on the inside of my wrist, where I could see it all the time. I wanted a permanent, visual remembrance of how Ronnie James loved to touch me, and of how comforting and sweet his touch had been.

The Wrah-Wrah’s first fuzzy little prints. The one I chose didn’t come from this set, but we’re going to have this sheet framed.

When our house-calling vet brought the Wrah-Wrah’s cremains home to us two days later, she surprised us with another sheet of paper on which she’d stamped some lovely, clear Wrah-Wrah prints, a thoughtful gesture that touched us deeply. I vacillated between my two favorites before deciding on this one: 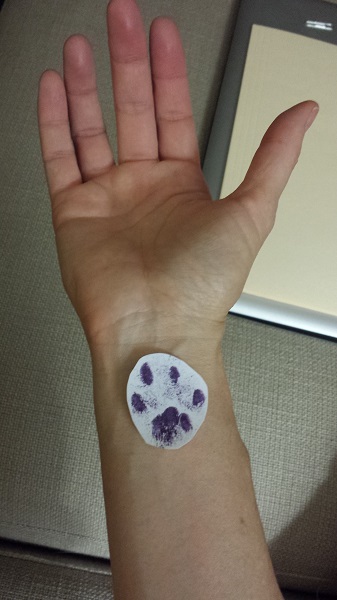 Getting an idea of how it would look….

Callaghan loved it and decided to get the same tattoo. We went to the Club Tattoo down the street here in Tempe to make an appointment with the person who’d done my last (spiral of hearts) tattoo. We made our double appointment for Saturday afternoon.

The same tattooist did that spiral of hearts around my arm in 2011, right before the move to France. (In case you’re wondering, no, I don’t lift weights. I just do Body Combat 3x / week. I do want to get back in the garage to work out, though… it’s been a good couple of months.)

I explained to our tattooist that I wanted the tattoo to look smudgy and real, as if Ronnie James’ inked paw had been pressed directly onto my wrist. He expertly used four shades of black/gray to achieve the effect with shading. I’m extremely pleased with how it turned out. I absolutely adore it.

Now I’ll always have the Wrah-Wrah’s paw on me.

And here’s a bad selfie, just for fun. (How do people take mirror selfies, anyway? It never worked out the few times I tried it. It must be an art form.)

Thwarted by lighting! Useless selfie attempting to show my freshly bandaged wrist… but you can see Callaghan in the background getting his tattoo done, so there’s that.

The Wrah-Wrah is Forever.

2 thoughts on “The Wrah-Wrah’s paw print.”