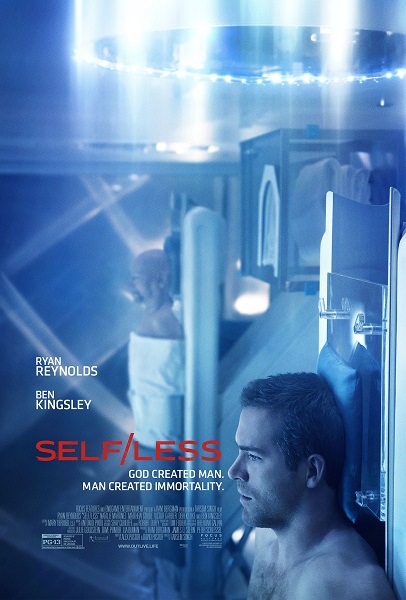 You know how it is when you’re terminally ill and someone slips you a business card offering help, and, despite all the medical expertise your bottomless fortune could buy at the most prestigious of world-class medical facilities, you call the number, thinking that going rogue with your healthcare might resolve your mortality crisis… and if it doesn’t, you have nothing to lose, anyway?

I wasn’t sure what to expect when I went with Callaghan and two friends to see the newly released sci-fi action-thriller Self/less (directed by Tarsem Singh) on Saturday, but I’d seen the trailer, and I was intrigued. Though it’s been nearly 20 years since my college metaphysics class, my copy of John Perry’s A Dialogue on Personal Identity and Immortality (1978) still occupies a sliver on my bookshelf, and it was partly because of this pamphlet-size book (required reading for the course I needed to complete my philosophy minor) that I wanted to see Self/less. 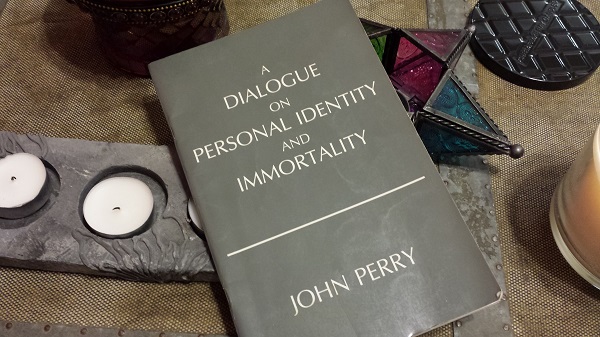 A relic from college metaphysics.

Metaphysics had been one of my favorite philosophy courses, and A Dialogue on Personal Identity and Immortality is a text that’s echoed in the ravines of my memory ever since, as personal identity theory interests me greatly. My penchant for sci-fi action-thriller-type movies would have been enough to propel me into the theater for this movie, but academic curiosity heightened my anticipation. What were the writers of Self/less going to do with this challenging metaphysical topic?

Turns out, nothing. The people behind Self/less took on the subject by not taking it on at all. This is anything but a toothsome philosophical study; about a quarter of the way through, I accepted the fact that Self/less is a dumb sci-fi action movie, romping around the casings of the ideas.

But no matter! I was really there for the fun of it and the thrill of an action-packed ride… and sometimes, truth be told, the dumber the sci-fi movie, the more I enjoy it. Before I knew just how insubstantial and mediocre Self/less was going to be, I settled back for good times, but a part of my mind remained occupied, needled by the ghostly recollection of Perry’s book. I made a mental note to pull it down from the shelf when I got home.

An hour later, the credits rolled, the lights came on, and the four of us left the theater somewhat underwhelmed by what we’d just seen. The movie fell short of delivering in the “good times” department, as well.

When I retrieved A Dialogue on Personal Identity and Immortality from my bookshelf the next day, I opened it and read the first sentence to greet my eyeballs:

“Memory is sufficient for identity and bodily identity is not necessary for it. The survivor remembered Julia’s thoughts and actions, and so was Julia.”

Just as I’d thought I’d recalled! I flipped back a few pages, read a little more, and couldn’t help but wonder if the Self/less script-writers had been inspired by Perry’s paper. The story behind the above quote reads:

“Julia North was a young woman who was run over by a streetcar while saving the life of a young child who wandered onto the tracks. The child’s mother, one Mary Frances Beaudine, had a stroke while watching the horrible scene. Julia’s healthy brain and wasted body, and Mary Frances’ healthy body and wasted brain, were transported to a hospital where a brilliant neurosurgeon, Dr. Matthews, was in residence. He had worked out a procedure for what he called a ‘body transplant’. He removed the brain from Julia’s head and placed it in Mary Frances’, splicing the nerves, and so forth, using techniques not available until quite recently. The survivor of all of this was obviously Julia, as everyone agreed – except, unfortunately, Mary Frances’ husband.”

This, essentially, provides the premise for Self/less. The “body transplant” procedure described in A Dialogue on Personal Identity and Immortality is called “shedding” in Self/less, and Perry’s Dr. Matthews correlates to the Self/less character Albright (Matthew Goode).

In Self/less, the (cleverly named) company offering to perform the body transplant/shedding, Phoenix Biogenic, has made an exclusive private industry of the procedure, available to the 1% who could afford it. The company’s slogan? “Leaders in Consciousness Transfer Technology.”

Consciousness Transfer Technology. The door is open here for a re-con mission into the complexities of mind, consciousness and identity in relation to the body, but mostly what we get is Ryan Reynolds playing a character vacationing in another character’s body until flashes of memory from the original owner of said body clues him into the reality of his situation. A bunch of predictable shit hits the fan. “Soon I’ll be gone,” Damian (Ben Kingsley/Ryan Reynolds) intones toward the end. “I can already feel myself fading.” Our protagonist gallantly bows out after Doing the Right Thing. Imagine that!

All snark aside, I have to say that Self/less deserves points for coming up with the most elaborate suicide I can remember seeing in cinema. The movie encompasses a long, slow self-destruction from beginning to end, with Damian unwittingly employing a convoluted and roundabout method of killing himself. This path proves to be beneficial in allowing him opportunities to tie up some critical loose ends along the way, such as banging a succession of hot chicks in his borrowed body (freshly shedded Damian remarks that his new young and healthy body “has that new-body smell,” and he wastes no time in taking it out for a few joy rides) and delivering a heartfelt letter to his estranged daughter, who believes him to be dead (atonement and closure, check and check).

Self/less wasn’t the worst sci-fi action movie I’ve ever seen… I thought it was marginally better than last summer’s disappointment, Lucy… but I’m thinking it rather dulls the luster on the resumes of some of its talented actors. As Albright astutely remarks, “Immortality has some side effects.”