Fur-children update! Some progress on home-front dynamics has been made since I posted about the arrival of Nenette a week and a half ago. Our new girl has already put on some weight, which is good. She’s still somewhat nervous, but she’s slowly gaining trust in us… it’s like, the more time that passes and she’s still here, the more she trusts that we’re not taking her back to the adoption center. She talks to us softly in her tiny conversational voice as we stroke and nuzzle her, and she purrs readily. It’s truly a pleasure to watch her personality blossom as her confidence grows. 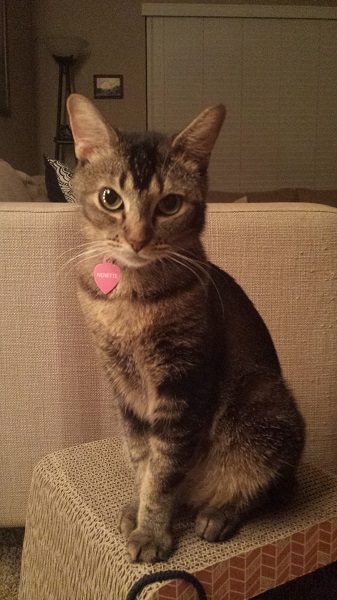 “Why are you holding that phone in front of my face instead of petting me?” ~Nenette

Nounours remains calmer with the presence of another feline in the house, but his restored contentment glows like dappled sunlight in a pool of emotions, including impatience (because he wants to snuggle with Nenette, but she’s not quite there yet), and jealousy (just as he was always inclined to be jealous when we’d love on the Wrah-Wrah… it’s just a part of Nounours’ personality).

We can see that Nounours still misses his Wrah-Wrah, but he’s definitely more relaxed now. He even sits in his kitty chair again, something he hasn’t done in a very long time.

Above all, Nounours wants to get close to his new sister. He was gratified when he was able to join her at the living room window one morning (Thursday last week): 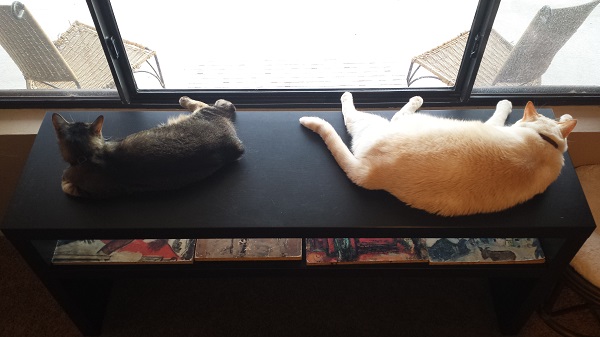 This was the first time we witnessed Nounours and Nenette being companionable, lounging together at the living room window after breakfast.

This was at around 6:30 in the morning. I was happy to be home to capture the moment!

Speaking of capturing moments, let me digress for a second to show you Nenette’s tailless butt, which I swear she deliberately put on display for me the other night when I said, “Nenette, let’s get a picture of your tailless butt!” She totally responded by posing like this: 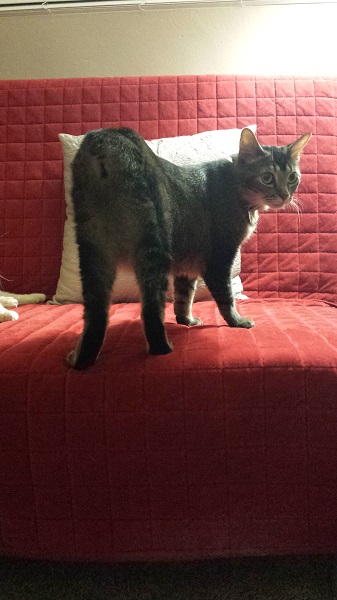 This darling girl! I’m telling you.

Then there were a few other sweet moments, such as nose-touch greetings like this: 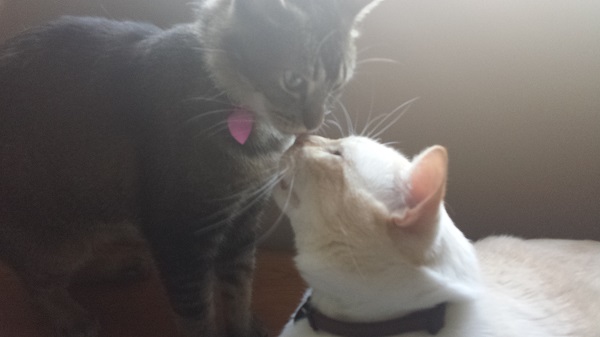 We haven’t seen them snuggled up to each other yet, but we’ve graduated to moments like these. 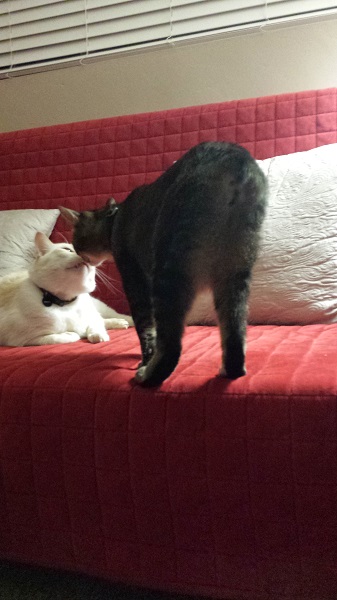 Nenette initiates the nose-touch greeting (patented by cats). This was what she was doing right before she posed for her tailless butt picture.

I guess that counts as a tailless butt pic, too! Progress, little by little.

2 thoughts on “In which Nounours orders espresso and Nenette poses with her tailless butt.”