I’ve always marveled at the borderline-comical dramatic reactions the French have to peanut butter. They range from mockery to disgust to hatred. I saw it for myself when I was living in France, I see it in my own home with my French husband, and I see it, from time to time, in pop culture. Epic is the humor that can be derived from the French disdain of peanut butter.

Not only are the French totally lacking whatever gene is needed to appreciate peanut butter, but they don’t understand it. The very concept of peanut butter confounds them.

This week, Callaghan demonstrated the extent to which they don’t understand it.

It happened early one morning as I was getting ready for work.

About half the time, if I’m running late in the morning, Callaghan will help me get out the door by getting my food ready for the day. It’s a low-maintenance affair. He knows which foods I cycle through, so any combination of things he throws into the cloth lunch bag (very low-maintenance over here) makes me happy.

My go-to lunch is a peanut butter and jelly sandwich on whole wheat bread. It’s a balance of plant-based proteins, healthy fat, fruit and complex carbohydrates that works really well for me… plus, I love it. I always go for natural, creamy peanut butter – the kind that needs to be slowly, patiently stirred when it’s new – and jam with no added sugar. The rest of the bag can be filled with any combination of fruits, veggies, hummus, nuts, popcorn, blue corn tortilla chips, etc. I also keep a stash of various protein and energy bars in one of my big desk drawers at work. I basically graze all day.

There’s always a jar of peanut butter in the fridge.

Usually, Callaghan will ask me if I need help getting the food together, or I’ll ask him for help if I’m running late.

Not on Wednesday this week, though, because I wasn’t late for work that morning. In fact, I was earlier than usual, enjoying a chill morning, leisurely doing my make-up while drinking coffee. I reveled in knowing I could take my time getting ready, put my food together afterward, and still get to work early.

(Side-note: Callaghan’s been taking me to work. I haven’t walked in a while. The persistent humidity of monsoon season ended that… I’m a wimp in humidity.)

So it was Wednesday morning, I was making great time, and I was just finishing getting ready when I heard the vague background hum of activity in the kitchen increase in decibels and segue into a familiar stream of profanities in French.

I heard Callaghan clearly punctuate a string of muttered words with one of his favorite obscenities: “putain d’enculé.”  Those were the only two words I heard, but they were enough to signal that something had gone awry. “Putain d’enculé” is French slang along the lines of “motherfucker.” (Not literally. The words actually mean something more like “fucking fucker.”)

What happened now? I thought, rushing down the hall to find out.

I got to the kitchen and found Callaghan covered in peanut butter.

I wish to all that is holy that I’d had the presence of mind to run for my phone so I could take a picture for you guys, but alas. You’ll have to use your imaginations.

There was peanut butter on the walls.

There was peanut butter all over everything I could see. It was all over the floor; an oily, brown patch glared up from the middle of the kitchen, partially smeared where Callaghan had started his attempt at cleaning it up. It wasn’t going well. Oil and water don’t mix.

As I stood in the doorway taking it all in, I realized that suddenly, just-like-that, I wasn’t ahead of schedule anymore. From the look of things, I was now going to be late.

But I couldn’t be annoyed, because I was too preoccupied a). trying to hold in the peals of laughter that were roiling up from my gut, b).  reminding myself that Callaghan had only been trying to help (not knowing that I didn’t need help that morning – but he didn’t ask, and I didn’t ask him!) c). wondering what, exactly, had happened, and why.

I knew he was doing something with peanut butter for me because obviously, he doesn’t eat it. I deduced from the bread sitting out that he’d planned to make me a sandwich. I wasn’t sure what was happening with the peanut butter, though. It seemed like his colossal mishap occurred with a brand-new jar, but I knew there was an open jar in the refrigerator, so why would he open a new jar?

“What happened?” I asked, genuinely confused.

“I don’t know! I was trying to mix the peanut butter! I thought it would go faster if I used the electric hand mixer!! It blew up in my face!! Putain d’enculé!!”

I lost my battle and held my stomach as I bent over laughing. The image he’d painted was killing me.

As we cleaned up the kitchen, I shared my personal method.

“I slowly, carefully stir the new peanut butter with a butter knife, and I do it the night before I want to eat it,” I said, “So it can thicken in the refrigerator overnight. Otherwise, it’s too liquidy.” A new jar of natural peanut butter is a solid mass with an inch or two of oil sitting on top. It’s not easy to mix without spilling it, even when mixing it slowly and carefully. It requires a degree of patience. I couldn’t even imagine the peanut butter carnage when he’d inserted the hand mixer and switched it on.

When I asked him why he opened a new jar when there was an open one already, he said, “I wanted you to have fresh peanut butter. The other jar is all hard at the bottom.”

See? I couldn’t be annoyed. He was too sweet! I shared another insider trick: when the jar is almost empty, take it out of the refrigerator and keep it at room temperature so the peanut butter left at the bottom can soften.

I don’t remember being taught these things. The complexities of peanut butter handling and maintenance must be instinctual for Americans, while they’re utterly lost on the French. Peanut butter is a language they simply do not speak. 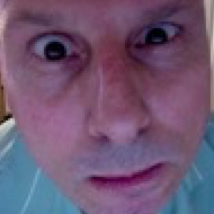 Callaghan’s face as it must have appeared mid-peanut butter apocalypse.

Callaghan put all of his clothes in the wash that same morning, but the oil stains from the peanut butter didn’t come out of his shorts… not even with the use of a pre-wash stain remover gel. They were ruined.

I guess you could look at the incident either as Callaghan getting his ass kicked by the peanut butter, or as the peanut butter getting brutally violated by hand mixer-wielding Callaghan. Each one could have said, “You should see the other guy.”

But in my opinion, the peanut butter won, if for no other reason than it made me late for work that day.