Today falls between two days of significance: Thanksgiving and my TALC-versary, the latter being more of personal significance, of course.

And happy 3-year TALC-versay to me, which actually feels like an extension of Thanksgiving, because I’m grateful for this blog. I’m especially grateful for all of you who read it. I wrote my first post on November 28, 2012 after creating my WordPress account sans clear idea of what it would involve. Sometimes it’s more fun not knowing, though, and fun, it has been. I can’t say it enough: Thank you all for reading! Here’s to the next three years!

Yesterday marked our first Thanksgiving here in the Land of AZ since we moved back. It was just the two of us and kitties this year. We talked to Mom and Dad on Skype and then did the traditional thing of eating a lot and catching up on Scream Queens.

For the food, I kept things simple and made savory dishes to satisfy the palate the same way as the traditional Thanksgiving spread. I made quinoa and brown rice pilaf with sautéed mushrooms and garlic, roasted baby red-skinned potatoes and onions, roasted Brussels sprouts, and thick eggplant slices lightly fried in olive oil. We had fresh, cooked broccoli with Veganaise for an appetizer, and fresh raspberries for dessert.

Now for some pics for a mini visual kitty update!

No one poses better than la petite Nenette.

I managed to catch Nounours in a rare moment of being properly illuminated for the camera. You can even see the blue of his eyes!

Nenette has taken to resting on the back of the couch to be near us. 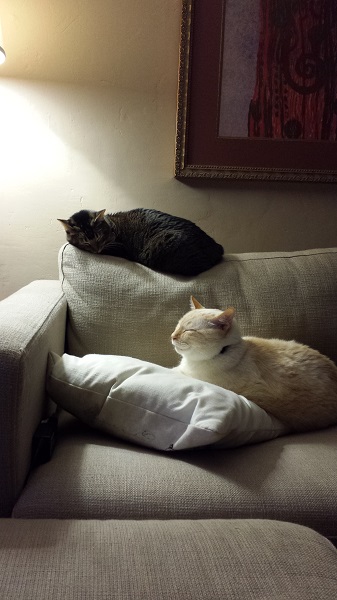 It’s funny how these two often sit near each other on this end of the couch.

Also! Kitties’ Aunty Carol captioned one of Nenette’s pics from the last update:

Yes, Nenette really says that sometimes when she’s in the same space as Nounours, and he says the same thing of her. Their dynamic is mysterious and Callaghan and I mostly try to avoid intervening too much, but I admit that I’m a helicopter cat mom who sometimes hovers over the furbabies to make sure Nounours keeps his intimidation tactics to a minimum.

Today, we’re hiding from Black Friday madness. It feels like the day after Christmas, and that’s awesome.