At present, joyous times are being had with our houseguests (my in-laws) from France, who will stay with us a few more days yet. All manner of general housecleaning needed to be done before they arrived, but I spent the better part of last week taking apart my office, sorting through unwanted miscellany (“garbage,” “recycle,” “Goodwill”), and putting the room back together.

Most of the action took place beneath the surface in the closet and drawers, so the room itself doesn’t look much different now than it did last week. Even so, it’s different to my eyes, which had beheld the spectacle of the room’s innards strewn about on the floor and piled up on furniture over the few days it took me to analyze it all. I felt like a forensics investigator. What has been seen cannot be unseen, as they say. It was a lot of crap.

The terrain of my desk changed slightly when I added a lamp, which makes all the difference. This is now my full-time work environment, so my office needed a desk lamp more than the dining nook did. (Another lamp has taken its place in the dining nook, anyway.)

You knew where this was leading… I’ve got the photographic tour here for anyone who may be interested, such as you fine readers who’d asked about my Table of Death when I mentioned it a week ago. It started as a raucous, dark joke with a friend when I showed her the table and realized just then that a Dia de los Muertos bag hangs in that corner (pure happenstance, which prompted the hilarity – you had to be there). Laughing about it helped to mitigate the somberness of that part of the room, but it helped further when another friend asked to see the table and called it a “Table of Remembrance.” So, yeah. I like pairing that brighter perspective with the dark humor one.

Enough about that. 360 office tour ahoy!

As seen from the doorway: 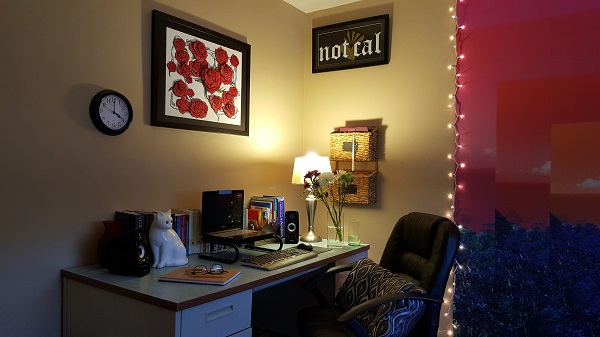 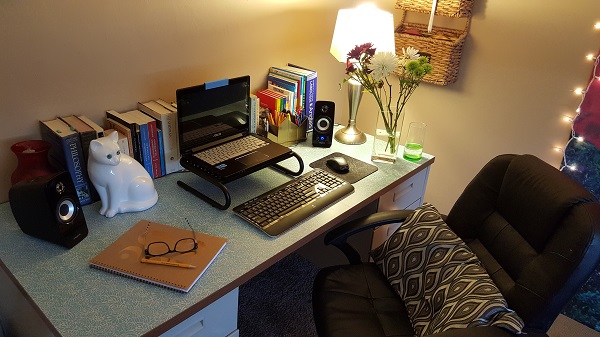 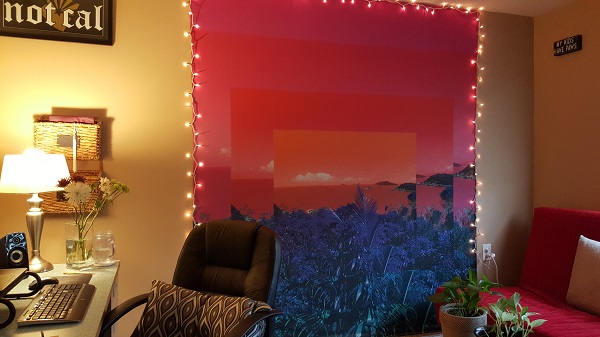 Long wall to the left (with tapestry and twinkle lights)

Window wall across from the doorway (with futon)

Wall to the right (closet)

This concludes our tour. I won’t be needing to cover a door window in this office, but the door here stays open, anyway.