Nothing says “I hate my brain” quite like trying to explain English language colloquialisms to a non-native-English-speaking person. I suck at it, anyway.

You could probably spend your whole life learning a second language if you’re after facility with all of its informal expressions. Callaghan made his latest joyful discovery the other day when he wanted to know what’s meant when someone finishes a sentence with, “if I do say so myself,” because, of course, there’s no translation for that phrase in French.

The first time he asked about it – I don’t remember what we were talking about – he cut me off mid-sentence.

I had to stop and think about it, which I’ve never had to do, like, ever.

Expressions can’t be nailed down because there’s usually no logic in such statements, right? After a few false starts, I finally said something to the effect of: “You say ‘if I do say so myself’ in a self-congratulatory context, like when you’re giving yourself credit for something, but you want to be humble about it. It shows that you’re aware that you’re congratulating yourself. A more literal way to put it would be, ‘…if I may be so bold as to display pride in (whatever I did)’.”

By then, I felt like I was babbling, but I forged on to offer an example: “Not a bad job for my first time building an IKEA executive desk, if I do say so myself.”

I felt that this should suffice, but then Callaghan demanded finer-tuned clarification. I was unable to oblige due to the sensation of my brain being beaten with a pointy stick, pointy end first.

“I can’t think of how to explain it better,” I said. “You’ll hear it the next time I say it naturally in conversation.”

Since then, he’s been practicing the phrase with great zeal, inserting it where he sees fit:

“That’s a beautiful-looking moon, if I do say so myself!”

I have a lot of patience, I thought. If I do say so myself.

Another time, he proclaimed, “Nice is the most heinous city in the world, if I do say so myself.” 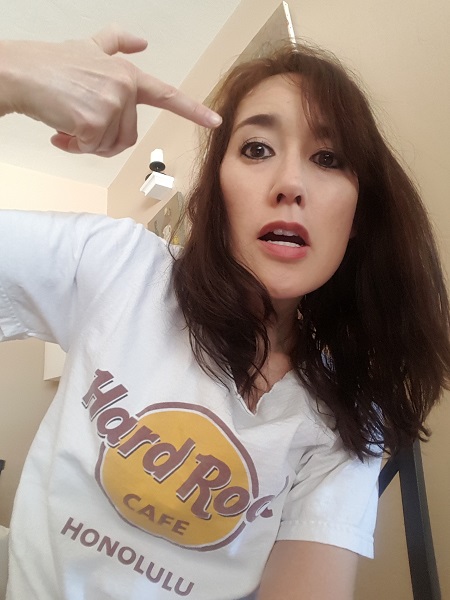 Later, he assured me that he was just joking when he said “if I do say so myself” about the moon. He said he said it on purpose, to be funny.

Then he told me that he’d had the hardest time learning the whole “Did not!” / “Did too!” argument little kids get into in the backseat of the car while their exasperated parents sitting in the front try to make the road trip a fun time.

“‘Did not / Did too’ made absolutely no sense to me,” he said. “There’s nothing like that in French.”

I was glad I wasn’t involved in that one.