I re-wrote an older poem of mine and thought I’d share it here today.

Let me re-phrase: I didn’t “re-write” this poem. I added two words… two words that I’d originally included, then removed at the suggestion of one of my MFA committee members. Reading it decades later, I wondered why I’d acquiesced. In most cases, I saw the light when a professor brought it to my attention. In other cases, I resisted. Acquiescing after resisting doesn’t mean that you want to do it. It means that you do it even though you don’t want to. You finally just do it. It’s the path of least resistance. Years later, you might look back and feel exactly the way you did before you acquiesced.

Especially if the matter was something profound, like two words. If it’s just giving in to Chinese food when you wanted Mexican, not so much.

Here’s the restored poem. The pic beneath it shows the printed version minus the line… the line missing its words.

The Beast of Romance

The camel fills what she emptied by lifting
a hoof, sand leveling the prints
across the dune to a vanishing –
the risk on the left with the right’s deflection.

When I decided to remove
myself from all of your embraces,
the sky wore its palm-stricken eclipse,
the circular ghost breaking into song, lunatique,
pallid Clouds of Eleven
careening to our old green and white names.

Weighing-in takes precedence:
readable things stowed away like water
in her bony satchel of a hump.

There is always this necessity.

She relinquishes what
she has stored. She comes to court
with all the evidence
locked tight in the file of her flesh. 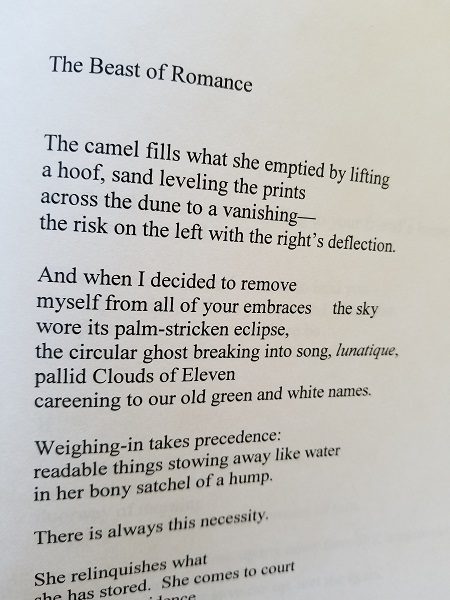