A quick Geronimo update is in order! We’re in the swing of summer now, and Geronimo has gotten with the program.

Geronimo’s daily summer pattern is to chill in the dark depth of the cave he’s dug out for himself, and…

But he does come out to bask in the sun for a little while at least every other day (usually in the late morning), just for a quarter of an hour or so. Then he goes right back into his burrow and disappears in his cave.

Every once in a while, we’ll see him cruise around the yard eating grasses and low-hanging hibiscus flowers.

He’ll sometimes emerge from his cave to sit in the patio part of his burrow, facing out. He likes it when he does this and we sit with him on the outside. He enjoys our company, even if he’s out of reach. How do I know this? He told me. A mother knows. 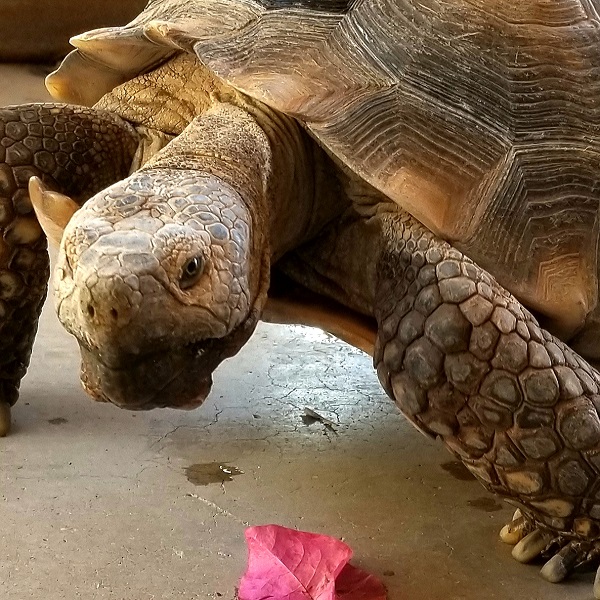 Geronimo in the summer

Once a week, usually on the weekend, Geronimo comes out and we’ll soak him for as long as he’ll lets us, which is pretty much just as long as he needs to drink water.

He has a drinking routine; it involves sticking his whole head below the surface. He blinks his eyes underwater a few times and squirts water through his nostrils when he comes up for air. It’s like he’s rinsing out his eyes and nose, which is probably exactly what he’s doing.

Have I ever mentioned that his favorite part of soaking day is the Romaine lettuce he gets for his after-bath treat? And then we’ll pull some hibiscus flowers from the top branches of the hibiscus bushes and hand-feed them to him. His favorite!

Geronimo and his flowers.