Well guess who finally did something about her cardio game that’s been almost MIA since 2017.

Last week, I went to Body Combat for the first time in seven weeks, guys. Seven weeks. This week was the second time. Remember when I used to go 3x/week? Yeah, so do I.

Let’s review: I’d dropped Mondays for writing schedule reasons. Saturdays because I switched Combat for Pump. That left Wednesdays. Once a week means hit or miss. This year, it’s been more of a miss.

Before last week Wednesday, I only went to Body Combat 11 times in 2018. I did the math (my talents are many – I can plug numbers into an online percentage calculator), and only 10.67% of my group fitness workouts this year were comprised of Body Combat.

Illness/hospital/medical testing. Medicinal side effects. Other scheduling conflicts. Being out of town. Class cancellations. Logistical issues. Holidays. You name it. Missing a Body Pump class here or there isn’t that big of a deal when you go 3x/week, but if you go to Combat only once a week and you miss it, that’s a whole week gone.

With the summer heat, it’s been something like four months since I’ve worked out in the garage.

Finally, just this week, I endeavored to start a Body Combat practice at home using our Les Mills On Demand subscription. Thanks to inspiration I took from my friend Jessica (hey girl), I realized that I could do it in our dining room, which has a tile floor. No A/C in the garage, no problem.

How did I do it? The main thing I needed was a motivating factor to get through the workout without someone leading, so put a twist on it: I muted my laptop and did the workout to my own playlist. I’ve been listening to a lot of industrial/industrial dance music lately as I’ve cycled back to my first electronic music passion, so I thought, what if I were to do a Body Combat workout to industrial dance music rather than to Les Mills’ (mostly) trap remixes? (I do like dubstep and trap, by the way, and drum & bass… I’m not dissing Les Mills’ music.)

It was weird. I’m used to listening to what the instructor’s saying. Muting the workout, I could only watch the screen to see what I was supposed to be doing. Unsurprisingly, I missed a lot as I tried to keep up with what they were doing while also trying to adapt the moves to my music. I never stopped moving, though. I worked up a sweat. My triceps were sore the next morning… very sore! Evidently, something got done.

It was fun to experiment with the music. Now that I’ve done it once, I know what to change for next week’s (industrial) Body Combat workout at home.

Meanwhile, last night’s Combat class at the gym was amazing. I’m getting back into it! Here’s a commemorative post-workout, cartoon-filtered selfie: 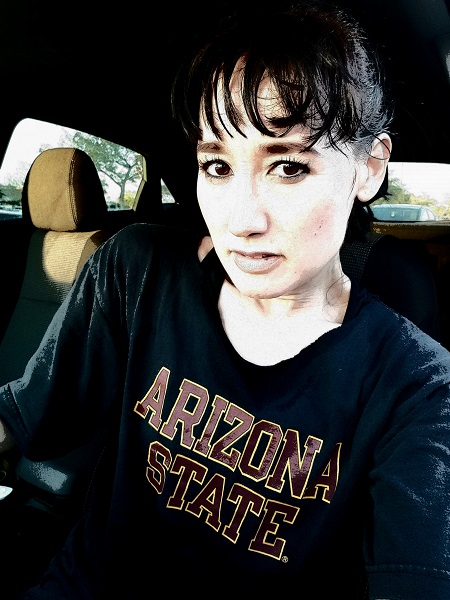 The cartoon filter reveals how I sweated my eyebrows off! Haha!!

I’m relieved to get back to regular cardio one way or the other. I’ll keep up my home Body Combat workouts, and I’ll get back into the garage as the weather cools down. Onward, then.

Moss agate! Okay, that was random. The link to my new blog post is up in my bio. 🖤 #nofilter