[Note: a redundancy, not an oxymoron!]

This week, I’ve done the best procrastination of my life.

I knew that the high-priority pile of paperwork on my desk wasn’t going to do itself, but I could only get through a few pages before I thought of something else that had to be done. I’d been warned about this paperwork (a 45-page questionnaire), so I was ready to receive it, but man, they weren’t kidding. It was tough.

My initial rush of enthusiasm for the challenge went up in a vapor of dismay when I flipped through the packet and skimmed over the questions. I went to remarkable lengths. First, I ignored it completely. A week went by before I started filling in the answer bubbles. Then I found a podcast I’d been wanting to check out, and I had to listen to it before I could do anything else. I also remembered that I had phone calls to make, loose ends to tie up, and details to annotate in my planner and other notebooks. I had some binders to organize, accounts to check, and lists to make.

I baked banana bread because immediate action had to be taken regarding the bananas decomposing on my kitchen counter.

At last, I got through the first 20 pages of the questionnaire. Good job! I said to myself as I set the rest aside for the next day. The next day, I found a documentary I had to watch.

At the same time and in other news, the house needs urgent attention, too, and it all began this week. The operation had been scheduled: the entrails (ducts) of our attic were to be yanked out along with the diseased organ (air conditioning unit). A crane arrived before 6:30am yesterday morning (sorry, neighbors I forgot to notify) to transplant the new A/C. The crew returned early this morning to continue the work. They’re coming back to finish it next week. We have a hallway ceiling to be removed before they return, and then we have to have a new one put in place.

After the A/C is in and the ceiling is finished, the insulation people will arrive to re-insulate the whole top of the house. They’re also going to insulate the laundry room out back. The laundry room insulation will require more drywall work before and after that part of the operation. After all of that, the roofing people are coming, because it turns out that the house’s original swamp cooler (OG urban desert life) had leaked and rotted a part of the roof beneath the band-aid of the new roofing someone later applied, and that is our A/C’s official cause of death as noted on its death certificate.

Just when you think you only need a new A/C.

The point of this whole mundane story, though, is that our house undergoing extensive surgery made it even easier to ignore the paperwork on my desk.

Not to mention, I also had a cold this week, which made it even harder to work up the wherewithal to fill in thousands of answer bubbles.

But I persevered and finally got it all done yesterday. Truth be told, I’m happy that I had an opportunity to do it at all, much less get it done. The whole thing is rather a priviledge. I’ll photocopy the packet tomorrow before I take it to the post office.

I’m now taking a minute to marvel at the procrastination capability I didn’t know I had. Also, I’m still turning over the information that came out in the questionnaire: Callaghan informed me that I “often punch him in the side” while I’m sleeping. WHAT. 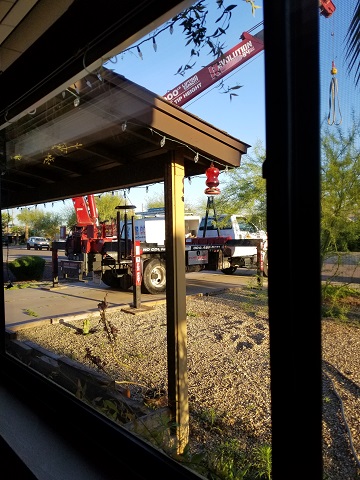 The early bird gets the A/C, because it’s a crane.

On a final note, may I recommend to you this podcast: 30 for 30: Bikram (about Bikram Choudhury, the man behind Bikram Yoga) and this 20/20 documentary: The Dropout (about Elizabeth Holmes and Theranos, her company). These disturbing tales of epic criminal disgrace may not be the cheeriest, but they’re interesting… and they make for some excellent procrastination material.

One thought on “High-priority. (Isn’t that an oxymoron?)”

Arcturus, the brightest star in the northern hemisphere. I took this picture on Friday night, when the sky was clear. One day I'll have a telescope and some kind of technological situation that will allow me to take actual pictures of such treasures in the night skies.