Hi. You must be here because you wish to read about last week’s Fiasco of the Week, because you know there was one.

This one involved a stench hovering like a putrid cloud near the corner of our bedroom, near my side of the bed. I noticed it as I was falling asleep one night early in the week. It was a distinctively organic smell, so I just assumed that either Ronnie James or Nounours had had an accident or sprayed, neither of which they’d ever done (since we’ve had them, anyway), but it wouldn’t have been surprising; their demeanors had been somewhat off-kilter due to recent, albeit temporary, changes in their routine. You know how cats are about their routines.

We sniffed all around the corner of the bed, trying to identify the odor’s exact location and source – up near my pillow, where it seemed to be the strongest. We stripped the bed of its sheets, mattress cover, pillow cases, bedspread… and threw the whole shebang in the wash. We cleaned the bed’s headboard and side planks. We pulled the bed away from the wall and sprayed pet odor neutralizing carpet cleaner on the carpet, though there was no stain to be seen. Just to be sure, we scrubbed the pristine brick wall behind the bed with soap and warm water, and then went over it again with a “green” all-purpose cleaner.

The smell didn’t go away. In fact, over the next few days, it worsened.

We weren’t angry with Nounours and The Wrah-Wrah, because we understand How Kitties Are. But by Wednesday evening, I became convinced that the kitties weren’t the culprits, after all. The odor seemed to be coming from something that had died. It had that sweet/sharp cloying dead smell. We performed another exhaustive search and found nothing.

On Thursday night, I stood near the bed, utterly perplexed. We’d done absolutely everything, but the odor was stronger than ever! I couldn’t bear the idea of sleeping with my nose in the ghastly fumes another night. There was only one thing left to do. It was drastic, but it had to be done. Obviously, the odor was either coming from the carpet or the wall, and it was being very stubborn. I would have to outsmart it. I would have to move the bed to the opposite wall.

Moving the bed entailed the rearrangement of pretty much all the furniture in the room, which I did by myself, because Callaghan and Chantal had gone out to Rawhide and elsewhere.

Honestly, though, I enjoyed the chance to get more exercise into my day. Because our queen-size bed is a sleigh bed, it’s heavy and ungainly, and I had to get all the other furniture out of the way before I could re-position it. I moved out the chest of drawers, the two night-tables, the long under-the-window table (aka the kitty window seat), my desk and chair, the corner shelving thing (no idea what it’s called), the vanity-less vanity stool (the vanity itself is outside on the balcony, having been re-purposed as a table for plants) and the clothes hamper. I shoved it all into the hallway, the bathroom, Callaghan’s studio and the main room, along with the objects that had been on the floor and on the furniture surfaces. Then I worked on moving the bed, which had to be turned around 180 degrees. I did some dragging and pulling, but I mostly sat on the floor, planted my feet on the bed and used it as a leg press. Great work-out! Once the bed was situated in its new spot, I could move all the furniture and stuff back in.

In the end, I’d basically flipped the room around, putting the bed and one of the night-tables against the wall opposite from where they used to be, and the chest of drawers, my desk and chair, the other night-table (there’s no room for a table on both sides of the bed now that the bed is against the wall with the door) and the vanity stool on the long wall where the bed had been. I returned the long, low table to its spot under the window, so the kitties could keep their window seat… it’s a tight squeeze getting around that side of the bed, but it works. I folded the corner shelving thing, leaning it up against the wall, since there’s no longer an available corner for it.

I stood back in the doorway to examine the new configuration, and I liked it. The room still looked good, and the mysterious awful odor would no longer be next to my head at night. Plus, I’d gotten an amazing impromptu work-out while I was at it. I’d worked quickly for a full hour, taking no breaks, pushing, pulling and carrying furniture, removing the heavy drawers from the dresser and hauling them out and back in, holding each one high up in front of me to get around stuff piled up in the hallway. I’d maneuvered the cumbersome queen-size sleigh bed around to the opposite wall, and moved everything else back in. I’d vacuumed along the way, working up a sweat and getting my heart-rate up (great cardio-respiratory work-out in addition to strength-training)!

I must admit, it was gratifying to discover the extent of the progress I’d made in regaining my strength and endurance since dedicating myself at the gym in Body Combat and Boot Camp classes (and the occasional hour on the treadmill) over the last few months. I was happy to feel more like my old self again while making strenuous physical effort. My fitness levels are getting back up to where they were before I moved to France – check! The bed was no longer against the wall with the horrid odor – check!

I felt quite satisfied and pleased with myself.

I went into the kitchen to wash my hands before going around the apartment to collect the random objects that belonged in the bedroom, and… the dead smell was in the kitchen. It hadn’t been there before.

It hit me the second I got there. I stood still and inhaled the offensive odor as my disbelieving eyes followed it to the counter by the sink. The flowers that Callaghan had given me 10 days ago were sitting there where I’d placed them before moving the bedroom furniture.

The dead flowers. The flowers that I’d set on my night-table back when they were fresh… the night-table next to my side of the bed. The flowers had expired, and they reeked. I cautiously bent my head to smell them. The dead flesh odor was unmistakable. There was no doubt about it. I’d found the source.

I couldn’t believe it. All along, the offending odor had come from a vase of dead flowers!

All I had to do was remove the flowers.

But I do like the new room arrangement, and so does Callaghan (who is still laughing at me for this, by the way). I’m enjoying my new office corner even more than my previous one, as well. 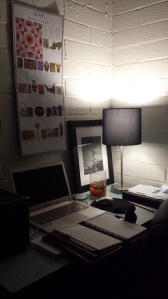 My new office corner in the bedroom!

And I got in a great work-out.

And the room is more in keeping with good feng shui principles now that our feet aren’t facing the open doorway while we’re lying in bed.

And in the end, I did manage to get rid of the odor.

And I learned to be more mindful of flowers that have died and require disposal! 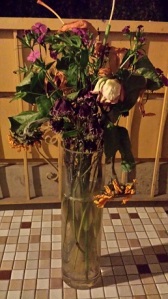 I put the noxious flowers out on the balcony so I could present my discovery to Callaghan when he got home. As Johnny Ringo (Tombstone) would remark in perfectly bad taste, “Smells like someone died.”

They were lovely when they were alive, though.