Despite our intentions and efforts, a fly on the wall at the end of May last year would have seen us running around chez nous as we prepared to leave the Little House in the Rhône-Alpes and our alternate “places of residence” on the French Riviera. The undertaking seemed monstrous in its magnitude. It felt like we had loads of stuff scattered all over the southern half of France. Wound up in the chaos of making the trans-Atlantic move back to the States, we had to admit that we were no more organized about it all than we were in the days leading up to our (my) move to France 20 months prior, at the beginning of September 2011.

(I say “my move” because Callaghan never actually lived in Arizona, so he didn’t really move to France. He was here with me for just over three months, and during that time it was decided that we had to live in France because of his work.)

Such as it was that our move to the U.S. of A. was slightly less than seamless. It all turned out well, though, right down to Ronnie James and Nounours behaving beautifully, with exceptional patience, in their carriers the entire way. From the 90-minute taxi ride from La Combe to Lyon, to the two-hour layover in Frankfurt, to the 10 or so hours flying to Houston, to the three hours driving from Houston to Austin the next morning (how they appreciated getting to run around in the Houston hotel room that night!), and the final four hours being carted around town as we searched for an apartment (the one we’d initially arranged didn’t work out), waiting to check into a hotel room for a few days, we discovered that our little boys are Amazing. Superstar. Traveling. Kitties!

Those of you who’ve been reading here for a while – thank you! =) – may remember this picture:

Kitties touch down on American soil, and Ronnie James says, “Wrahwrahwrahwrahwrah” in English for the first time.

We enjoyed five months of fun summer/fall times in Texas before I realized where I had to be.

We packed our entire household again, put Ronnie James and Nounours back into their carriers, and headed west to return to the desert. We arrived in the Valley of the Sun on November 9, moved into our Tempe apartment and eased into an unusually mild Arizona winter.

A few weeks ago, in the heart of spring, we visited the Desert Botanical Gardens and felt truly welcomed home as we wandered amongst the desert flora. You can really see the personalities of the cactuses when you visit the DBG:

Hey there, Stranger! Welcome home to the Land of AZ.
(No one sculpted this cactus to look this way, by the way)

Contrary to what some have been led to believe, Arizona is a friendly place on many levels!

So this is my reflection today. One year back in the States. Seven months back in Arizona. It feels so good to be back. When we left Texas, there was still some uncertainty about the future, but the instant we got here, we both knew that we were home.

When we stepped outside early yesterday morning, the rich, heavy fragrance of creosote settled around us, telling us that it was going to rain. Sure enough, within the hour, a few drops fell, and I thought, how could I live anywhere but this magical, intoxicating place?

I first moved to Phoenix after the Gulf War in 1991. It’s been over twenty years, and I still meet people who come here that way… they arrive in some state of limbo or instability, despair or even ruin, and they rise, like the Phoenix, from the ashes. Arizona has a history and even a documented tradition of people moving here in need of healing (even when the reason was mostly consumption back in the 19th-century). This is a healing place, a land of powerful Native American spirituality and a sunny, dry climate conducive to recovery.

On Monday night, we went down the street and climbed halfway up “A” Mountain to take pictures of the sunset with Callaghan’s father, who was leaving the next day. My breath catches at the splendor of an Arizona sunset to this day.

Sunset beyond the Hayden Flour Mill and Tempe Town Lake 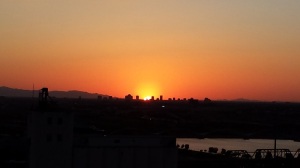 Silhouette of the Phoenix skyline against the deepening sunset

Tempe at dusk, between the sunset and nightfall