We spent the last two days in Paris doing what we always do in Paris – running around the city, dragging our luggage up and down the Metro stairs, racing through the stations (with and without luggage), jumping walls and running again to just barely leap onto waiting trains. It occurred to me, as I was jumping a wall after Callaghan in the Metro two nights ago, that Parkour was invented by a French guy. Perhaps he was inspired by similar action-intense negotiations of the Metro stations, running after trains in Paris!

We love Paris, and we had a great time visiting with relatives and friends. Plus, it was beautiful and sunny on one of the days, so for the first time, I got to see Paris in the sun against a blue sky. It was fabulous.

Now we’re on the French Riviera, visiting more friends and Callaghan’s immediate family. (He was born in Paris, but grew up down here.) This morning we caught an early TGV to Cannes, and the five-hour train ride gave me an opportunity to sleep a little as well as to resize some pics for today’s post.

Here’s a smattering of random images from the last two days:

Glacière is a stop on the Metro. We thought it was funny to see the sign next to a ski ad (“Glacière” translates to “ice chest.”) 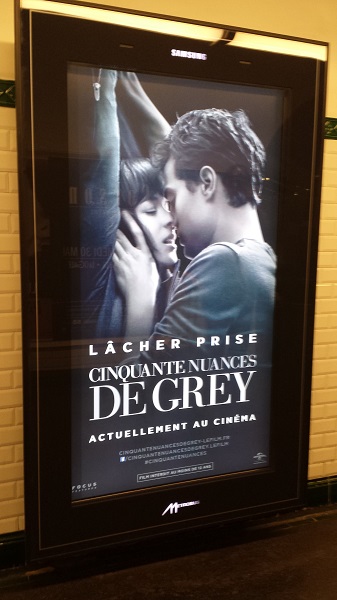 Another pic from the Metro. Not even France is safe from the 50 Shades. 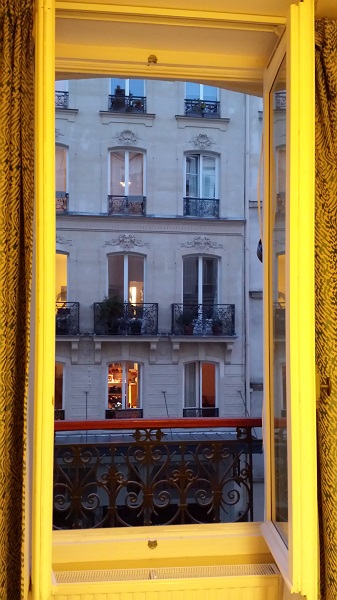 The view from our hotel window.

…and a nearby abandoned shoe. 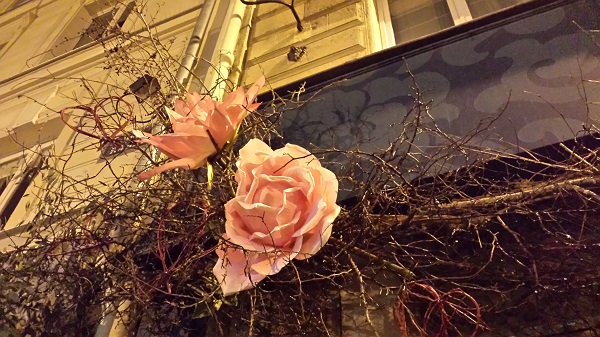 A random storefront that caught my eye…

Back in the Metro! An ad for an architecture exhibition.

In our usual selfie pose. We’re on the train again, en route to visit relatives.

Back at the Metro – but this pic is to show that it’d been a sunny day!

Poster ad – again, in a Metro station – for a street artist exhibit at the Espace Dali.

This sweet little girl was on our train to Cannes this morning. Her Mommy said I could take her picture. I love French Bulldogs.

Notice the absence of Jim Morrison’s grave. That would be because we still haven’t gone, as circumstances didn’t allow for it… but we’re heading back to Paris on Friday, and you know we’re going to Parkour our way to that cemetery the minute we get off the train.

Also not pictured is the group of police officers standing around expectantly in one of the Metro stations, an incongruous sight compared to what I’m used to here. I’ve never seen the cops just hanging around like that in France before. I wanted to snap a picture, but I didn’t think they’d appreciate it, so I held back.

I hope you’re having a great week!