My triceps are sore today, and I love it!!

Perhaps the best thing about Les Mills International is the “International” part. It means that their classes are held in 20+ countries, so it’s feasible to get in your usual workout even when you’re traveling overseas. Thanks to our friend Chantal, we were able to do Body Combat with her at her gym yesterday. She got the passes for us in advance, and we found a Thursday 6:30pm session at her gym’s Cannes location (she usually goes to the one near her in Villeneuve-Loubet). It fit into our schedules perfectly.

I didn’t know what to expect going in. Would the instructor teach the class in French or in English? If in French, would I understand the martial arts-specific terminology in the commands? I didn’t think so. Callaghan, who usually prefers to be in the back, graciously agreed to stand near me so I could look over and see what he was doing if I got lost. I stood in the center of the second row, between two people in the front row, so I could see myself in the mirror. Callaghan stood behind me and to the left. Chantal took a place next to him, directly behind me.

Here’s kind of how it went:

1). The instructor did, indeed, teach the whole class in French. (I learned a new word, “crochet,” which means “hook.” Makes sense.)

2). He started out explaining that he was substituting for the regular person. He wasn’t the usual instructor, so he was new to everyone, not just to us.

3). Unlike in Arizona, Callaghan was the only guy in the class.

4). Some of the tracks were familiar, while others totally weren’t! And that was good. There was some music I’d never heard, and moves we hadn’t done in class before. Those were probably older tracks.

5). The instructor was high-octane and clearly trained in martial arts.

6). There was a T.V. with a running loop of fitness footage that Callaghan said was distracting him.

7). Today, I feel it in my upper body. 10 days is a long time to go without working out when you’re used to going 3x/week!

It was fantastic, and it felt AMAZING to work out again after ten days of nothing (lots of walking and impromptu fake Parkour in Paris notwithstanding).

On that note, I’ll leave you with a few pics:

I took some of these brochures for souvenirs.

The group fitness schedule is posted on the classroom window, like at our gym. Unlike our gym, though, it’s packed with classes. 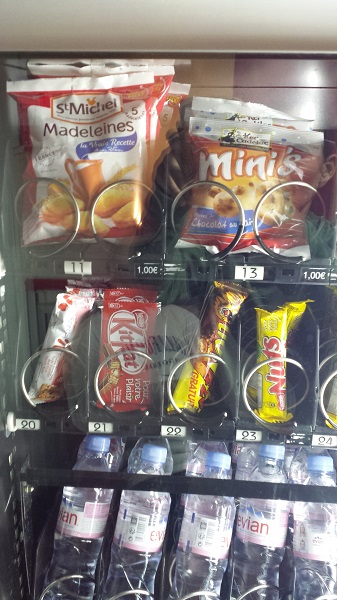 The vending machine at FitLane is all Evian water, except for two rows of snacks at the top. Something you’d never find in an American vending machine: Madeleines. There’s no junk food in our gym in Arizona, at all… just energy drinks, protein shakes and water.

A last look on our way out. Au revoir, FitLane!

Happy desert roses. ☀️🌵🌺 In other news, the link to my new blog post is up in my bio! #nofilter