Like many people, when it comes to New Year’s resolutions, I’ve been an on-and-off cynic most of my adult life. My birthday falls five days before New Year’s Day, though, so at some point, I finally thought, Why not turn my personal one-year-older goals into resolutions? Because what are birthdays if not opportunities for introspection and decision-making to move forward with new or refreshed goals, right? Or something like that (says my inner self-help guru to myself).

“Resolution” minus the “re” is “solution,” after all… and that stands out to me. I’m a fan of solutions.

As it turns out, I do well participating in the ritual of making New Year’s resolutions. It’s glorified goal-setting that could be undertaken on any random day, sure, but January 1 is as good a day as any, fanfare or no. If we don’t have the motivation to commit to a goal on any other day of the year, at least there’s that day!

“Goals” is a popular word right now, but I want to talk plainly about how there’s a difference between wanting to achieve goals and needing to achieve them. Resolutions, in my opinion, are goals that we need to achieve; we make them in order to reignite the mechanisms we have for growth, self-improvement, joie de vivre… whatever it is that we’re lacking, in whatever way it needs to manifest. Ultimate goals are things like contentment and productivity. Contentment and productivity are good. People who are content and productive are good for society, good for us all.

You might receive advice that’s actually detracting, usually coming from the hearts of well-intentioned loved ones. There’s the old “…but you have to WANT to do it,” which I think is psychobabble for “You have to feel that doing xyz is going to result in personal gratification, or it’s not worth the effort.” I don’t believe this. Some of my greater achievements in life resulted from goals that I needed to pursue, but I absolutely didn’t want to pursue them.

Quitting smoking, for instance. I smoked between the ages of 15 and 23. I only smoked for eight years, but addiction is addiction no matter how long you’ve had it.

I absolutely did not WANT to quit smoking. I loved smoking. Whenever I’d think about quitting, all I WANTED my next cigarette. When I finally committed to breaking the habit, I still didn’t want to. I did it because I knew that I needed to.

Quitting was every bit as excruciating as I thought it would be.

I quit cold turkey, and I never smoked another cigarette. That was 24 years ago. (I think I was successful in part because I suffered through the process without the aid of chemical replacements. This was pre-nicotine patch. There was nicotine gum, but I wasn’t attracted to that strategy.) Suffering for that victory, that solution to the problem of my compromised health, made me value my success even more. If at any point in my smoking cessation journey someone uttered those condescending words in my general direction – “You just have to WANT to quit!” – I would have had to bite my tongue REALLY HARD. I know why I’m quitting. It’s a decision that I made. I don’t need you to tell me that if I just WANT to quit, I’ll effortlessly break my addiction overnight and ride off on a unicorn into a field of flowers and happy little bunnies.

Overcoming addiction of any kind is never easy, no matter if someone WANTS to do it or not.

But I digress. My point is, make a resolution, for the New Year or on any other day. Think of it as going after a solution. Focus on seizing something that will change your life for the better if you capture it. You’re not just making a change (passive connotation). You’re taking action (aggressive connotation). So be aggressive in tackling your resolution. Be a New Year’s resolution badass. Go for it.

Another thing people commonly say: “Do it for yourself. If you do it for someone else, you won’t succeed.” Again, I disagree. I mean, I don’t think this is always the case.

Last year, my main New Year’s resolution was to go cruelty-free… for Ronnie James, my feline fur-child. As Callaghan and I tried desperately to save his life, I told the Wrah-Wrah that I’d make every effort to avoid purchasing and using personal care products and cosmetics made by companies who engage in animal cruelty practices. (Granted, this wasn’t difficult, as I’d already been boycotting a couple of big-name brands for years to avoid contributing to their human rights violations. Boycotting companies that test on animals wasn’t a far stretch from that.)

I did it for Ronnie James. He died five months into the year, but I’m still doing it. For him. For all animals, but first and foremost for him. And doing it for him has kept me motivated to stick to my resolution more than I would were I just “doing it for myself.” In a strange sense I can’t really explain, the act of consciously and continuously striving to remove myself from the cycle of animal suffering at human hands keeps Ronnie James alive.

This strategy of goal-planning works for me, anyway. Everyone is different, but it might work for you, too. It would be worth trying! Dedicate your resolution to someone who deeply matters to you. Make them a promise you won’t want to break, and you might find that it’s easier to stick to your efforts.

This brings me to Resolutionary Road, 2016! I have more than one resolution. Here’s my list:

1). Get more sleep on a regular basis.

Getting more sleep was my secondary resolution in 2015. Since I failed completely, it’s at the top of my 2016 list. I really, really need to get more sleep. Here, again, is the difference between wants and needs: I don’t WANT to get more sleep. I WANT the opposite… I want more hours in the day. I want to stay up until 3:00am, because for some reason, I’m often possessed by a rush of creative energy at around 11:00pm every night, and I’m afraid that if I don’t utilize it, I’ll squander it. But more sleep is an absolute necessity for my health, so this year, I’m going to try to shut everything down at 10:00pm so I can be in bed by 10:30pm. I get up at 5:30am on weekdays, so this would give me seven hours of sleep IF I fall asleep the second my head hits the pillow. (Which never happens. But nearly seven hours of sleep would be a great improvement over the four-five hours I typically get.)

I dedicate this resolution to Mom, who always worries that I don’t sleep enough. I don’t want her to worry about me for any reason, because worrying is detrimental to her health.

For my second resolution, improving my French conversation, I simply need to speak more French. I have a bad habit of answering Callaghan in English when he speaks to me in French. The divide between my comprehension level and speaking level is now so great that it’s ridiculous! I have no excuses. I just need to speak it more; that’s the only way I’m going to improve.

I dedicate this resolution to Callaghan, obviously!

As for strength-training, I need to make that a regular part of my workout routine. I’m not weak, but I would feel better in a stronger body. Doing pull-ups in my home office doorway every once in a while isn’t sufficient, and shadow-boxing with dumbbells isn’t cutting it, either. We have heavier dumbbells, so I need to start using them.

I dedicate this resolution to Ming, my best friend who died suddenly in 2003. Ming was one of my Tae Kwan Do instructors, and as friends, we developed a brother-sister bond that made him a member of my family. Ming was an extremely talented martial arts athlete, and his work ethic in the do-jang inspires me to this day. Improving my strength so I can be a better martial artist is my tribute to him. 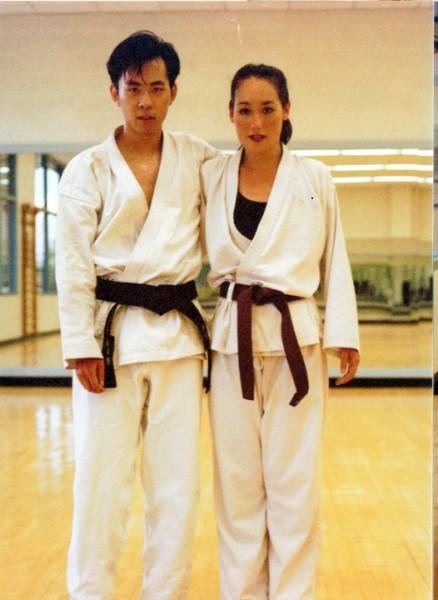 Happy Resolutioning, if you do it!