It would be an understatement to say that July is the month that’s gone the fastest in 2016. July sped by. No, actually, it parkour’d by. It sprinted, scaled walls, and jumped rooftops so fast that it got way ahead of me and I lost sight of it.

Maybe I spent my free time too absorbed in watching T.V. shows or movies while indulging the less-healthy range of my appetite, but at least I can now share some of those things with you!

Entertainment items 1 and 2 on this list take place in the 80’s, number 3 is an 80’s film remake, and number 4 takes us into the 90’s. Number 5 is in theaters now for your spooktastic viewing pleasure.

Let’s get into it!

Netflix has done it again. First of all, this series showcases one of the most spectacular come-backs I’ve ever had the pleasure of watching, and if Winona Ryder doesn’t earn nominations for Emmy and Golden Globe awards for it, then something is wrong with both of those organizations. In fact, we should see Stranger Things as a whole nominated for numerous awards. The series’ excellence stands alone, but I have to also note that its genre (sci-fi thriller/horror/mystery) is a difficult one to pull off, and Stranger Things nails it. You may think of The Whispers or Wayward Pines or Poltergeist, if you’re familiar with any those, but now, the standard has now been set, and soundly. We can’t wait for season two.

We’re glad that it took us so long to discover this series, because it’s fun to have four seasons of a well-made show laid out before us and to laugh at cliff-hangers’ attempts to frustrate us as we load up the next episode. The Americans lets us in on some fascinating insights and interesting tricks of Cold War Russian spies in the U.S., whether they’re 100% true to reality or not. Keri Russell and Matthew Rhys perform exquisitely. This is just a fun show to watch.

I said what I wanted to say about Ghostbusters 2016 in my recent non-review review post. To sum up: Loved it.

4). Stop at Nothing: The Lance Armstrong Story (documentary)

Here’s one to add to my list of documentary favorites, and of course, it’s a biographical one (my favorite kind).

I wouldn’t normally recommend a film that enraged me to where I wanted to reach into the screen and grab (Lance) by the neck, but this is a very well-made documentary that is worth watching. In fact, this is a great film to watch if you’re tired of being mad about current events and you wish to direct your anger elsewhere. This film tells the atrocious story of American cyclist Lance Armstrong and his cheating scandal. By the time we were done watching it, I was ashamed to be American.

Most of us are now aware that Lance was doping while “winning” all those cycling races, but we were floored to see the extent of what he did. Unbelievable.

Lights Out is a recent theater release. I saw its trailer not too long ago and knew I wanted to see the film on the big screen, but when it came out and my friend (with whom I saw the trailer) reported that it was good, I wasted no time in getting tickets! Callaghan didn’t know what we were going to see, because I wanted to surprise him. My surprise was a success. He knew nothing about the film, and we both enjoyed it. I’m going to write a little non-review review about it, so I’ll leave it at that. 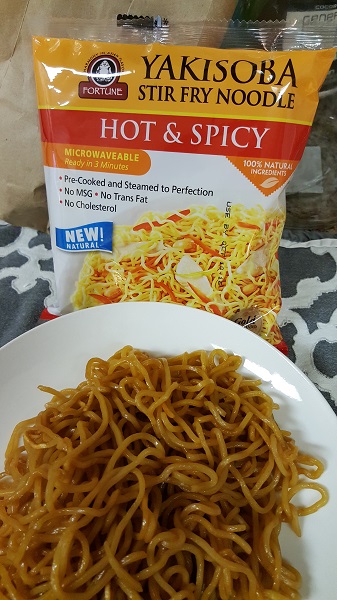 I’d been craving hot and spicy ramen, so when I spotted this hot and spicy yakisoba at Safeway, I had to try it. It says “stir-fry” on the package and you can prepare it that way, but I prefer to nuke it. You put it in a bowl with water and dump the seasoning mix on top and stick it in the microwave for four minutes. Then you break up the cooked block of noodles, integrate the noodles with the sauce, and eat it. The package also says “add vegetables,” to which I say, “Bah.” I will eat veggies on the side, but I like noodly pastas unfettered.

Oh yes, Daiya did. Vegans, we should have known this was coming. All the warning signs were there; Daiya is awesome and it is relentless. Now they’ve brought us macaroni and cheese in a box, like there isn’t already enough vegan junk food around.

But this mac n cheese is gluten-free, soy-free, and dairy- and lactose-free, and it has protein and calcium, so it’s not a box of empty calories… we don’t even have to feel that guilty about eating it!

I’m usually not a fan of gluten-free food products, but honestly, I can’t tell that this mac n cheese is gluten-free… or dairy-free, for that matter. The ready-made sauce is thick, creamy, and rich, and it would make a great queso for nachos. Yum.

We get this from Whole Foods.

My energy bar discovery of the month came from Go Lean, whose original cereal I sometimes eat as a post-workout meal (for its carb and protein composition). This bar has an interesting, different sort of texture that I like, and I like the way it tastes, too. Not everyone may like it. I like it. I like 8 grams of protein, 4 grams of fiber, and 8 grams of sugar in a tasty 200-calorie bar. This is well worth trying if you’re looking for a new energy bar! Oh, and it’s gluten-free… and vegan, of course.

Because what’s a Favorites list without some kind of bread, right? For me, breads and pastas are life. I change the bread I eat for breakfast every four to six weeks, just because I don’t want to get tired of eating the same thing every morning. I’m currently enjoying these multi-grain English muffins that happen to be “light” (I wasn’t looking for that designation). I have two of them toasted and literally drenched in original Smart Balance every morning. I’m not exaggerating… there’s always a puddle of melted buttery goodness left on the plate when I’m done eating. 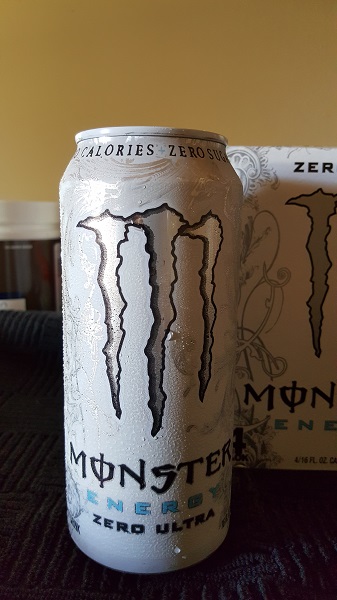 Meet my guilty pleasure of the month: an energy drink. Not healthy. Not something I’d drink to excess. Like all energy drinks of its ilk, this is a chemical-infused, glorified diet soda. This particular one, Monster Zero Ultra, is actually a glorified Mountain Dew. It’s wonderful. I have maybe three per week on afternoons I work out during breaks from writing. (Superstarch is great, but it’s too expensive to consume every day!)

This concludes the list, and let August linger a little longer, please, 2016. The month is starting out with relatives visiting from France, which I believe is how last August began, too. Fun times ahead!